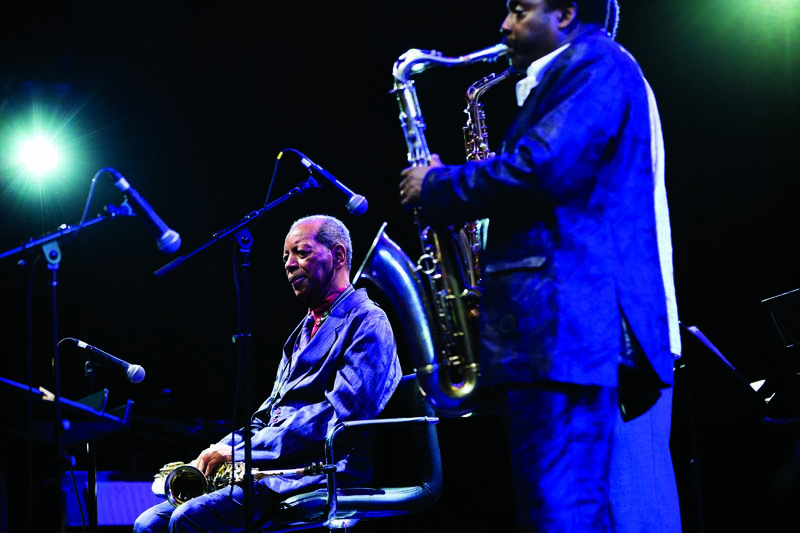 The word “genius” comes to mind with reference to Ornette Coleman-no question about it. He taught me how to play. Before Ornette, you could make a living playing in someone else’s style-I was playing Bud Powell and so forth. Ornette drew a line in the sand.

Our time at the Hillcrest Club [in 1958] was so monumental. The club would be full, packed even, for our band, but when Ornette started playing, the street in front of the club would suddenly fill up with people waiting for him to stop playing because they didn’t know what had hit them!

When someone can influence the whole world of music, “genius” may actually be too small a word! He changed the course of all of musical improvising: There’s before him and after him.

I was hipped as a teenager to Ornette. Just his album titles gave you big hints as to what was happening on them: The Art of the Improvisers. The Shape of Jazz to Come. New York Is Now! We had a friendship, and he was always inviting me to play or sit in, and I was always hesitant. But in 2008 I finally played with him in a performance for German TV. After the first couple tunes I was gonna leave, but Ornette had me stay the whole set, and even do “Lonely Woman” in the encore. He was so beautiful and so generous: He really wanted your contribution to mean something, no matter who you were.

So I had some really special moments with him. He just glowed, man. He glowed with life and energy and wisdom. And I remember the last thing he ever said to me. It was at his 85th birthday celebration, just this past March. He had a kind of guru vibe in those last days, and he just said, “Do everything you wanna do.” He repeated that a bunch of times. “Do everything you wanna do.” I’ll never forget that.

Ornette’s dedication to the music was endless. I first played with him when I was about 5 years old, and I was playing the trumpet. (My first name combines my father, Charles, and Ornette.) He had me sit in with him. It was an amazing experience because at every moment he played exactly what he wanted to share. And he was teaching me, by having me sit in, how to do that myself before I even knew what notes I was playing.

I certainly gained a world of knowledge from him. His harmolodic concept proved that each instrument was equal to all others and to the musical ideas that they are expressing. And when we think in an equal way about humans and about sounds, we are able to think and express in terms that uplift mankind. Ornette’s music was about bringing people together and showing all the possibilities that exist before they settle into a fixed position.

He also taught me that creativity is eternal. As long as there is life, there is something more to learn. And so we are fortunate to have been around one of the greatest artists of all time, who knew exactly what he wanted to express and was able to work it out intellectually and share it with us all.

I first met him when I went to New York City in my sophomore year at Pomona College [in Claremont, Calif.]. I had designed an independent study for one semester, a study of the saxophone since Ornette Coleman. He was very gracious, and his answers were always very clever; when you talk to him, the truth is right there, but he goes in circles around it-and ultimately gets to an even deeper truth.

He also warned me, “You have to be careful on that tenor, because you’re gonna attract some strange women on it.” That was part of Ornette’s conception: He understood that different instruments had different ways of speaking, attracted different sorts of people. That’s why he played tenor and trumpet and violin as well as alto, and he developed different sensibilities on each.

Ornette was the blues. The last time I played with him, last year in Prospect Park, everything else was stripped away, but that blues wasn’t. He sounded like a 9-year-old kid again, who just got a sax and was trying to play the blues. He’d gone back to the source: Although he was free, that’s what he went back to.

Depending on how he looks at it, Kenny Garrett’s latest album, Sounds from the Ancestors, has been out for an eternity or an instant. Recorded … END_OF_DOCUMENT_TOKEN_TO_BE_REPLACED

As I delved ever deeper into the 14 albums that document the Larry Goldings/Peter Bernstein/Bill Stewart trio to prepare for our January Zoom conversation, what … END_OF_DOCUMENT_TOKEN_TO_BE_REPLACED

The musical avant-garde is an area where creative people who have earned wisdom through a lifetime of experience can flourish. Wadada Leo Smith, who last … END_OF_DOCUMENT_TOKEN_TO_BE_REPLACED

Wisconsin-born and proud: For all of the avant-everything complexity Ethan Iverson has applied to his solo projects or the sounds he created in his role … END_OF_DOCUMENT_TOKEN_TO_BE_REPLACED