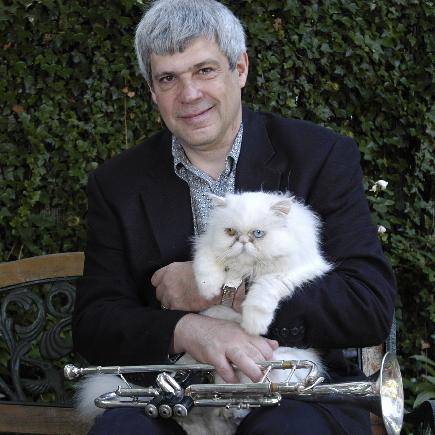 Randy Sandke has been a professional jazz musician for more than thirty years. As a trumpeter, he’s played with instrumentalists Michael Brecker, Benny Goodman, Kenny Barron, Dick Hyman, Mulgrew Miller, Bill Charlap, Eric Reed, Frank Wess, Ray Anderson, Chris Potter, Scott Hamilton, Wycliffe Gordon, Warren Vache, and Mel Lewis, as well as singers such as Mel Torme, Jon Hendricks, Rosemary Clooney, Cab Calloway and John Pizzarelli. Sandke has recorded over twenty albums. Nat Hentoff recently wrote about Sandke’s jazz album for kids, Jazz For Juniors. He is the author of Harmony for a New Millennium: An Introduction to Metatonal Music (2002) and he has also contributed to the Oxford Companion to Jazz and the Annual Review of Jazz Studies.

Sandke talked with JT about his latest book, Where the Dark and the Light Folks Meet: race and the Mythology, Politics, and Business of Jazz.

You’re very much a musician first and writer second. Why did you decide to get into the writing game?

I’d done a little bit of writing before. This book began as an attempt to understand why my creative music was getting so little notice. I not only experienced a wall of silence and disinterest, but outright hostility from some quarters. I came of age in the ’60s when innovation was encouraged. I know there has always been resistance to new approaches, but historically, creative musicians have teamed with champions in the critical community to achieve acceptance. In the 1980s and ’90s especially, I sensed an institutional push to keep new ideas out of the creative marketplace. I wanted to study this situation and try to determine what had changed in the jazz world.

When the world shut down last year, so did Alicia Olatuja. The St. Louis, Missouri-bred vocalist sat in her New Jersey apartment one day watching … END_OF_DOCUMENT_TOKEN_TO_BE_REPLACED

In May, during Jazz Congress 2021—held online rather than at the conference’s usual location, Jazz at Lincoln Center in midtown Manhattan, because of the pandemic—a … END_OF_DOCUMENT_TOKEN_TO_BE_REPLACED

Counting off a tune as she steps to the mic, Veronica Swift holds tempo in her stride. In the living room of a longtime collaborator, … END_OF_DOCUMENT_TOKEN_TO_BE_REPLACED

Billy Hart doesn’t see jazz as being split between avant-garde and straight-ahead; for him, the big distinction is between acoustic and electric. And given the … END_OF_DOCUMENT_TOKEN_TO_BE_REPLACED