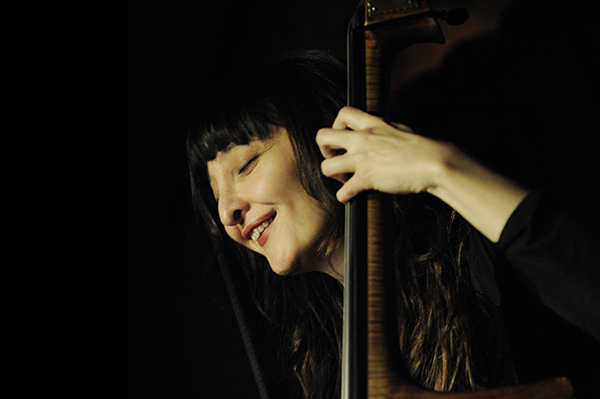 Bassist and composer Giulia Valle is a rara avis on the Spanish jazz scene. Born in Italy, she established her professional career in Barcelona as an artist and is now also an educator, teaching at Conservatori del Liceu. Driven by a strong sense of discipline and an undeniable natural talent, Valle has established herself as a unique voice on the contemporary and avant-garde jazz panorama. She has played with many different renowned musicians, including John McNeil, Guillermo Klein, Bill McHenry and Jason Lindner.

Today, Valle is focused on two new albums that will be released at the end of the year: Líbera and Giulia Valle Trio Live in San Francisco. She has also performed at many international jazz festivals and clubs, including the London Jazz Festival, Jazz a Viènne, SFJAZZ Center, and the Blue Note Jazz Club in New York. We spoke to her in Spain.

It feels like you get more recognition in other countries, like the United States, than in Spain, where you live. What do you think?

Well, I wouldn’t say that I get more recognition in the States than in my country because where I live, in Barcelona, which is a city that has a very rich music scene, I’ve always been supported by the audience and the bookers. I would say that the rest of Spain, with few exceptions, usually ignores pretty much what happens in Barcelona, especially Madrid. But those are political issues that have nothing to do with music and that are damaging the art scene all around. On the other hand, I’ve very much felt the support from people like Randall Kline from the SFJAZZ or Jeff Levenson from the Blue Note, New York. They’ve brought me there already twice, and made it possible for me to tour around other American and Canadian cities, which is something gorgeous as this is where jazz vanguard has always been.

Your music reflects a very personal aesthetic that explores different dimensions and possibilities of the contemporary jazz language.

I’ve noticed that in my audience there are people of different ages and social conditions, which makes me very happy. It means to me that music is basically a matter of energy. To have your own voice is just the result of what you are as a human being. Even if we always get inspired by other musicians, as composers we should always avoid reproducing a specific style, but of course we should let this style be an influence. We should also avoid trying to be someone else. Everyone has something to say if they really explore it honestly. This is probably one of the most creative paths we can follow but it is also quite painful as you are alone sailing in the middle of an ocean of possibilities and uncertainty.

You are considered by your colleagues a really good musician, able to work on your own ideas, having a strong knowledge of the development of jazz, and also being really demanding with yourself and the people you work with.

Oh, really? I’m glad to hear that! I’ve noticed how complex it is to write the right line for every instrument. I can tell that all the musicians I’ve been surrounded by have been really committed to my music and its changes despite the fact that what I do is an endless work in progress. At every concert the same tune might have some differences and that demands some specific attention and creates a certain tension, which is good for music: It keeps the artist connected to what he’s playing: nobody takes anything for granted.

Does this affect the emotional sense of your compositions?

Yes, the emotional aspect concerns me as well. One song can cover a wide emotional range, which implies, among many other things, that dynamics would radically change during the development of the piece. I might have written more than 20 different versions of many of my tunes, the most sophisticated ones. I also might write simple forms, which usually happen to be the easier ones to adapt to different contexts. The more I go into complex forms, the more specific the writing has to be, as I usually write knowing exactly who’s going to play every part of it, who’s going to take the solo section, who’s going to play the lead voice, etc. That makes each musician more comfortable as they feel you’re aware of their possibilities and this is what you want, to make people around you shine as much as possible.

How do you lead the band on stage?

My rule as a bassist is to push the band and spread the energy, to conduct with my playing into the dynamic changes, and this can only be executed by great skilled sidemen with a sense of drama and a sense of humour. I also totally believe in the concept of “group” as a team, more than a bunch of musicians strategically placed on stage or studio under marketing criteria.

You are eclectic, something evident in Líbera, one of your richest and most appealing projects. Líbera is alive, a changing body in constant evolution.

The Líbera project was created in 2010 and was supposed to be [performed by] a work in progress band. It started as a trio and now we are eight people on stage! I’ve been adding musicians according to the evolution of the music and in 2012 we did a record. But this album, for which I’ve been working on postproduction, for two years, still hasn’t seen the light. I’ve been waiting for the right moment for this record to be published and I feel that now’s the time! It will soon be issued by the Temps label. Being, as you say, a very eclectic project, Líbera is very difficult to define. It covers a wide range of feelings, from punk to rhumba to free jazz, and flows from very lyrical moments to a really intense rhythmic activity. There’s still a lot I feel I can do with this band. Let’s hope that in the near future Barcelona will be able to provide more spaces and clubs to play experimental music, because there’s a huge scene around here with brilliant ideas and a potentially growing audience.

Who is your music aimed at, other musicians or an audience with a large capacity for the abstract, or both?

I try to be as honest as possible with my work and what I want to explore in music; I always write what I can sing and try to avoid unnecessary elements. I also try to never forget that there’s an audience that deserves the best from the band. And to me the best I can do for both the audience and my music is to carry on juxtaposing different elements in order to reach all kinds of possible moods through the notes. So this is not only a matter of eclectic music taste, which is something really common in today’s creative musicians, but a matter of feeling an emotional range you’re able to provide to the public.

You are also working on a new album with your trio, recorded at SFJAZZ Center last June. What will we find in it?

Listeners will find in the Giulia Valle Trio a group that speaks with its own voice and that has been playing together for more than seven years in the Giulia Valle Quintet, a band that I’ve already recorded four albums with. Both piano player Marco Mezquida and drummer David Xirgu are unique and great musicians. Marco has an overwhelming energy and virtuosity and is a team player. As for David he’s considered one of today’s most creative drummers. He has played and recorded with many important jazz musicians such as Ben Monder, Dave Douglas, John Abercrombie, Vince Mendoza and Mark Feldman. He is one of the most intelligent musicians I’ve ever played with.

What are the main characteristics of the music you shape for this trio?

Being a piano-based trio and not a sextet, some part of the writing gets lost, however some new dimensions emerge through specific voicing and chords, as well as new instrumental interactions. I could define the music as a strange ensemble of cool and different melodies that work over more or less complex rhythmic patterns: easy to follow but very tricky at the same time. I could also define it as unpredictable and intense. I think that any further consideration should come from the listeners!

Did the American audience give you good feedback?

The audience’s feedback was just great. To perform in the States should be a must for any jazz musician, if I can be defined as a jazz musician. I’m not that sure I fit into that pattern though.

Could we consider these projects as different but complementary?

I guess so: Líbera and the trio’s album are going to be, respectively, my sixth and seventh record. And while Líbera floats into a more abstract concept, the trio provides a much more “figurative” side of my music. But there’s still a lot to say, or at least I hope so. And the more I go on, the more I dig simplicity, both in art and in life.

Depending on how he looks at it, Kenny Garrett’s latest album, Sounds from the Ancestors, has been out for an eternity or an instant. Recorded … END_OF_DOCUMENT_TOKEN_TO_BE_REPLACED

As I delved ever deeper into the 14 albums that document the Larry Goldings/Peter Bernstein/Bill Stewart trio to prepare for our January Zoom conversation, what … END_OF_DOCUMENT_TOKEN_TO_BE_REPLACED

The musical avant-garde is an area where creative people who have earned wisdom through a lifetime of experience can flourish. Wadada Leo Smith, who last … END_OF_DOCUMENT_TOKEN_TO_BE_REPLACED

Wisconsin-born and proud: For all of the avant-everything complexity Ethan Iverson has applied to his solo projects or the sounds he created in his role … END_OF_DOCUMENT_TOKEN_TO_BE_REPLACED