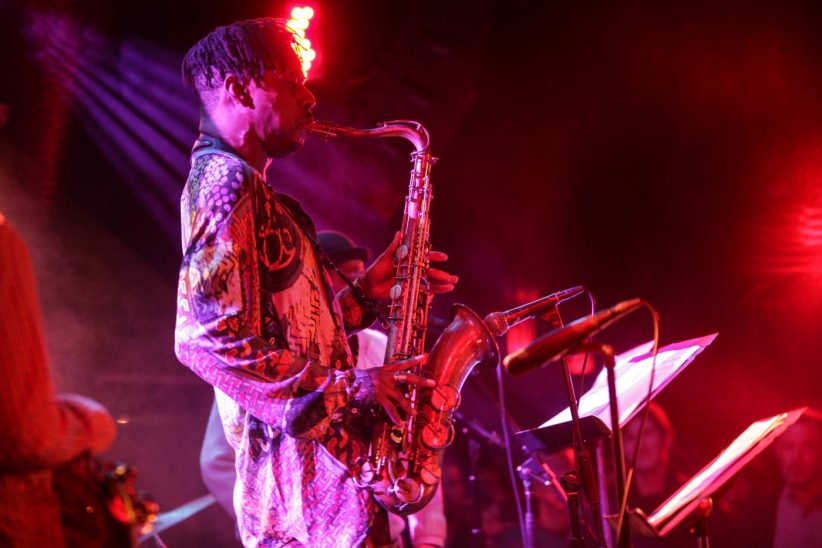 When London-based tenor saxophonist Shabaka Hutchings and his group Shabaka and the Ancestors opened the 13th annual Winter Jazzfest at Le Poisson Rouge on Jan. 5, they preceded Pharoah Sanders, one of their primary influences. As Hutchings developed coiled rhythmic motifs into a syncopated climax, Johannesburg-based Ancestors vocalist Siyabonga Mthembu repeatedly intoned the rallying cry “We need new hymns—we need new songs,” culled from the band’s 2016 release Wisdom of Elders (Brownswood). It was clear that the “new songs” were very much in the tradition of Sanders, without getting subsumed by it. Attesting to that, the 76-year-old spiritual jazz progenitor had Hutchings sign the album at the end of this interview.

The 32-year-old British-Barbadian saxophonist, clarinetist and composer sat down with JT for this lightly edited interview in the New York City club’s green room before the set. He ruminated on his other buzzed-about groups, Melt Yourself Down and the quartet Sons of Kemet; the festival’s social-justice mission; the Afro-Caribbean diaspora; and what he perceives as a London jazz renaissance.

JazzTimes: How has Pharoah Sanders influenced your aesthetic?

Shabaka Hutchings: It’s seeing how someone can take on the Coltrane legacy without losing their own voice. You hear a lot of people go into the realms of Coltrane and then maybe lose a part of themselves. With Pharoah Sanders, you can see that direct lineage, but you see a definite part of himself adding to that legacy.

How did Shabaka and the Ancestors form?

I used to go to Cape Town many times a year, and I was playing with musicians there, but then I would take flights to Johannesburg because they were cheaper. So whenever I’d go to Johannesburg, I’d try to spend an extra three, four days and just play with as many musicians as possible. The trumpet player on the album, Mandla Mlangeni, introduced me to his band. Then Tumi the drummer, he invited me to play with his band, Project Elo. The pianist Nduduzo Makhathini—we’d seen each other play in Cape Town—invited me to play a gig in Lagos.

So every time I go back, I make sure to do a couple of gigs with the guys, and then I decided to document it. There was no big plan; there wasn’t a big scheme to make an album or to form a band. It was just, “I’ve had these experiences for the last four years. Let’s just show everyone what we do.”

The theme of Winter Jazzfest this year is social justice. How have you incorporated activism into your own music?

Small steps. One of the tunes we wrote with Sons of Kemet was in memory of [slain Palestinian teenager] Samir Awad. [I wrote it] as a question of whom we decide to commemorate, and which lives are worth immortalizing. Do we only do that to either people who have loads of money or people who we perceive to make a certain contribution to society, and what happens to all the other people?

On a more practical level, I’ve got a pretty active following on social media, so whenever I see an issue that I’m passionate about, or if I come across articles that I think are nuanced, I make sure to share them.

People sometimes forget about Africa when they talk about jazz. How has the music of the Afro-Caribbean diaspora and the culture of the Black Atlantic influenced your artistic development?

A lot of the dialogue is trying to stake a claim for the music in certain factions of America, so it feels like people sometimes forget that actually the music does come from [Africa]. Regardless of who has the claim to the first originators here, it actually does go back further. No one person or one group started the music. The music started, or the impetus to create a significant section of the music, started in Africa. And I’ve found that if that is your mentality, that there is something that starts before you, it kind of takes your ego out of it.

Essentially, it’s saying that tradition isn’t a set thing. And that’s what I’m trying to do when I’m looking at Afro-Caribbean music and its place within my personal musical endeavors. I’m trying to discover what my tradition is, and what the tradition of the music that we play and what we might call jazz is.

For me, it’s significant to Coltrane and Pharoah Sanders that they’re trying to say, actually, what if the tradition of the music that we play is broader than narrow racial definitions—if there are things within the Eastern tradition, or within songs from wherever. It could be Scandinavian songs, if those resonate with us, because they’re actually a form from a place that came before we were divided into lots of different factions with different power dynamics.

What has your experience been of the scene in London? Is there a robust jazz audience?

The situation has changed drastically in the last five years. When I started, a bit less than 10 years ago, the scene was completely different. The way that people perceived jazz was different, and when I say people, I just mean like if you had stopped the average person on the street and said, “I play the saxophone,” what they thought of was a music that had nothing to do with them.

Within the last five years, it feels like a new generation has found a voice, or they’ve codified what they’ve been doing. And it just changed the dynamic of what people think of as jazz.

Sons of Kemet has songs inspired by Octavia Butler and George Lamming. How do literary texts influence the composition process?

When I write, I just write, but for me those writers put my headspace in a certain mood, especially Octavia Butler. I find that most of the stuff I’ve read of hers is set in a future that’s close enough for us to really grasp, but still futuristic enough for us to go, “If we don’t take care, then this could be our present 30 years, 100 years down the line.”

With George Lamming, for one, the title of that [1953] novel [In the Castle of My Skin] set a mood and made me start thinking. But then also, the situation of a boy coming to terms with his adolescence, and a country going through the same process of growth simultaneously and becoming independent, that made me really think about what it means to grow, especially as a jazz musician.

What’s the story behind the music video for “In the Castle of My Skin”?

The main thing was wanting to combine the art forms, the [South African] pantsula dance, which they do in the Johannesburg township of Tembisa, and house music and jazz. I knew the director, Lebogang Rasethaba, from the documentary Future Sound of Mzansi, which is on the South African music scene, and he knew Sons of Kemet.

[In the video], a boy conducts in the mirror, and that flashes into a grown conductor, which mirrors the theme of the [Lamming] book. The group that is dancing [the Indigenous Dance Academy] is based outside of Johannesburg. They take kids and harness their dance skills in a way that keeps them off the street and shows them how to work in groups, how to dance together as opposed to just having to fend for themselves.

Why do you think a single like Melt Yourself Down’s “The God of You,” which has a 7/4 time signature, has more than 20,000 views on social media?

[counts in his head] It is in 7/4. I don’t even really think about it. That actually came straight from a punk aesthetic, as in, we are not going to try to curtail the way that we feel, and the way that we feel is a product of the environment we’re in. We get in the Tube [the London Underground] and we feel angsty. London is a tense place. We’re not going to try to counteract that by being serene, and it feels like the audience just resonates with that.

Do you have any performance rituals before a show?

The band that the singer from the Ancestors [performs with] regularly, the Brother Moves On, always does a series of stretches and theatre-type warm-ups to get them into the same vibe together. I’ve had periods of doing that, but not recently. Sometimes I find that having a ritual can make the performance more in my mind, and in some ways, I like to just not have any emotion attached to it, so that if I get overwhelmed by the spirit of the music, it happens despite me not being emotional, as opposed to going into it wanting to be emotional.

Depending on how he looks at it, Kenny Garrett’s latest album, Sounds from the Ancestors, has been out for an eternity or an instant. Recorded … END_OF_DOCUMENT_TOKEN_TO_BE_REPLACED

As I delved ever deeper into the 14 albums that document the Larry Goldings/Peter Bernstein/Bill Stewart trio to prepare for our January Zoom conversation, what … END_OF_DOCUMENT_TOKEN_TO_BE_REPLACED

The musical avant-garde is an area where creative people who have earned wisdom through a lifetime of experience can flourish. Wadada Leo Smith, who last … END_OF_DOCUMENT_TOKEN_TO_BE_REPLACED

Wisconsin-born and proud: For all of the avant-everything complexity Ethan Iverson has applied to his solo projects or the sounds he created in his role … END_OF_DOCUMENT_TOKEN_TO_BE_REPLACED