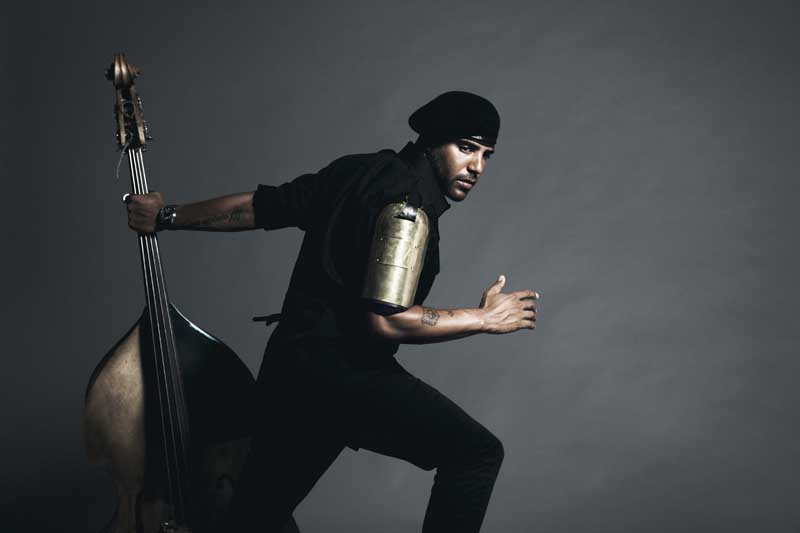 Musicians don’t often throw around terms like “business model” when explaining their approach to recording, but the folks who comprise the Los Angeles collective the West Coast Get Down don’t do much of anything in the usual way. The music on Uprising (World Galaxy/Verve), the new release from upright bassist, vocalist and composer Miles Mosley, was all cut during the same monthlong series of sessions in 2011 that produced saxophonist Kamasi Washington’s three-disc breakthrough, The Epic. (Since that project’s release, Mosley has raised his profile on the road with Washington, where his combustible arco solos, doused in electronic effects, can stop the show.) With roughly 170 tracks laid down by the Get Down musicians in total, there’s still plenty in the can: Mosley himself has two more albums’ worth of material to be cobbled into future releases.

“At the time, we didn’t think of it as a business model,” says Mosley, 36. “But when you can pool your resources everything gets cheaper; that’s obviously a perk. … To get us all in the room together, at all, is a tremendously difficult task, because in a week someone’s gonna get a call from Babyface or Andra Day or Chick Corea and be gone. Everyone knew it was a benefit to learn from the experience of being a sideman, but it was about time for us to invest in ourselves, our solo/bandleader projects.”

JazzTimes: Uprising utilizes eight West Coast Get Down players as well as an orchestra and choir. And you co-produced [along with drummer Tony Austin and manager Barbara Sealy] and did the arrangements. You were one of the main facilitators of these sessions. With everyone recording their own tunes for their own projects, how did you keep it all under control?

Miles Mosley: We went into one studio and set everything up. Then we recorded from 10 a.m. to 3 a.m., every single day, for 30 days. What made it a little bit easier was that, for a three-hour block of each day, you knew the session was in your hands. You got to be focused and guide the West Coast Get Down machine. But you were able to take a mental break, because it would be someone else’s turn next and you could go back to being a bass player or a saxophone player. I’m a hyper-organized person, and Tony is able to take our bright ideas, that are sometimes ambitious, and make them make sense so we can execute them in the quickest manner possible with the best results sonically.

There’s always a lot going on in this music, but your bass never gets lost in the mix.

I wanted to make a really visceral-sounding record, where you could hear the wood and the strings, you could hear the rosin on the bow, you could feel the brass resonating. There was no faking, no doubling, no effects—the bass is the only element that has any kind of treatment done to it. Everything else sounds super in-your-face. However many people were in the room, that’s what it sounds like. If you need a bigger sound, hire more people.

What drew you to upright bass and who were some of your influences?

I’ve always felt like the instrument you gravitate toward is actually a byproduct of some other inherent human talent. Playing the bass is natural for me because I’m organizing sound and rhythm and making sure everybody has what they need. The way I learned to play the bass, primarily, was through John Clayton. His method is that you transcribe. If you transcribe from enough sources you become the sum of those sources and all of a sudden you sound like yourself. But for the lion’s share of my youth, I sounded like Ray Brown. That was the only thing that mattered to me; if it ain’t pure Ray Brown, I had blinders on. I transcribed all of his solos and all of his basslines.

Some of your songs on Uprising are topical and timely, but it’s an uplifting record, not an angry one.

That was the idea. Certainly there’s a prophetic nature to it, with the current climate. But the human condition of getting knocked down and getting up and moving forward is something that people experience in their personal lives, their political lives, their social lives. I wanted to make a record that made me feel better about things that I was going through, both in my career and in relationships with people. I felt that if I could make that universal enough I could touch a series of emotions that are oftentimes complicated to wrap your mind around.

Which songs do you feel are most representative of your compositional skills?

One is definitely “Abraham,” a song about self-realization and about understanding that you’re responsible for more than yourself; you’re responsible to your lineage and your ancestry. You represent the forward-moving line of that. “Heartbreaking Efforts of Others” shows off the singing end of things really well, but lyrically it tackles a complicated issue that is completely universal. It’s [about] trying to do something correctly that ends up making everything a mess—the road paved with good intentions. And I really like Tony’s approach to the drums on that. We didn’t want this record to have any stock beats, so whatever your first idea for the drum beat is, the most logical one, don’t do that. And then “Tuning Out.” The bass solo at the beginning is one of my favorite expressions of the heart I have inside that instrument, and of how I cry through that instrument. I think I was given something special to say on that song. It’s a beautiful song.

That’s a very natural thing. I don’t sit down and say, “Today I’m going to make a funk record. Today I’m going to investigate R&B.” I’ve conducted my investigations and will continue to do so as styles of music become relevant to me. I truly believe that it’s not the job of the artist to define it. I’m fine with however people want to file it away on their shelves. As long as it makes them feel something, then fine by me.

Depending on how he looks at it, Kenny Garrett’s latest album, Sounds from the Ancestors, has been out for an eternity or an instant. Recorded … END_OF_DOCUMENT_TOKEN_TO_BE_REPLACED

As I delved ever deeper into the 14 albums that document the Larry Goldings/Peter Bernstein/Bill Stewart trio to prepare for our January Zoom conversation, what … END_OF_DOCUMENT_TOKEN_TO_BE_REPLACED

The musical avant-garde is an area where creative people who have earned wisdom through a lifetime of experience can flourish. Wadada Leo Smith, who last … END_OF_DOCUMENT_TOKEN_TO_BE_REPLACED

Wisconsin-born and proud: For all of the avant-everything complexity Ethan Iverson has applied to his solo projects or the sounds he created in his role … END_OF_DOCUMENT_TOKEN_TO_BE_REPLACED