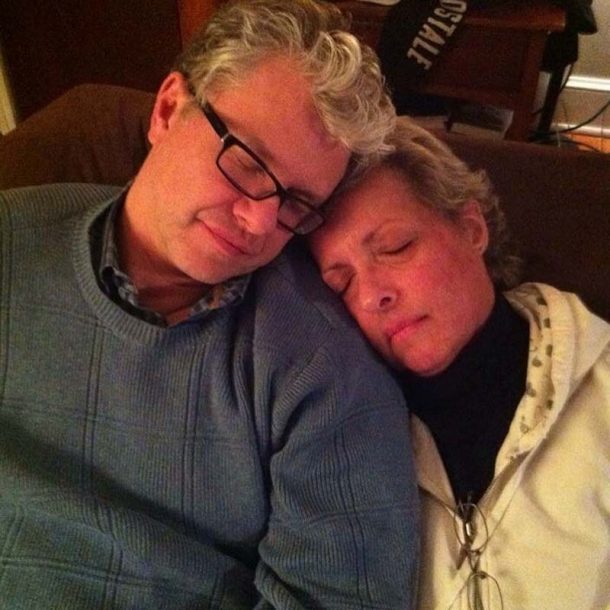 Drummer and bandleader Matt Wilson's "Beginning of a Memory" is a tribute to his beloved wife, Felicia, who died in 2014. (Courtesy of the Artist)

In a taping for JT’s Spins & Riffs podcast, drummer and bandleader Matt Wilson, 52, sat down at the New School, in Manhattan, to talk with JT publisher Lee Mergner about his latest album, Beginning of a Memory (Palmetto), featuring Big Happy Family, a collection of artists who’ve played with Wilson over the last 20 years. The album is dedicated to the memory of Wilson’s wife, Felicia, an educator and violinist who died of leukemia in 2014. Here are highlights from the conversation, edited for space and clarity.

It wasn’t just Felicia’s death that you lived through. Your family also lived with her illness for a long time.

For almost five years we were dealing with all the ups and downs. But I learned a lot.

And she played with you during that period.

There were really great ups, too. She did very well. She had a stem cell transplant on March 15, 2011, so things were going well. She was a high school orchestra teacher. She went back to teaching, but she had some problems with what they call graft versus host disease.

In addition to being a husband, you’re also a breadwinner for four children.

I had to work. The [jazz] community was fantastic, and it remains so. This album is dedicated to that community. It is also dedicated to my musician friends who have helped me be able to do this. The story behind this album is I wanted to have everybody that’s been with me to be on the record. It’s Arts & Crafts, with [trumpeter] Terell Stafford, [keyboardist] Gary Versace and [bassist] Martin Wind, and the quartet, which is [cornetist] Kirk Knuffke, [saxophonist] Jeff Lederer and [bassist] Chris Lightcap. And then people who have been in the bands-[saxophonists] Andrew D’Angelo and Joel Frahm, [bassists] Yosuke Inoue [and Paul Sikivie] all contribute. Larry Goldings contributes a solo piano piece of a tune of mine. And then Matt Balitsaris, who has produced all of my records and recorded most of all of them except for the first two, added some [acoustic guitar and dobro]. It’s 13 people, including myself.

It was a really great celebration, and it was done in a few different sessions. The first session, really the main session, we did 17 tunes, or 17 events, which was all of the record, in five and a half hours. [Balitsaris] put together these pieces of some of the dialogue in between cuts, so you get to hear us. I think 10 years from now I’m going to be really glad that dialogue is on there.

All the other tunes are from [my] other records, but there is something I wrote just for this record. It’s a tune I wrote soon after Felicia died called “Orchids.” We were sent a beautiful orchid from Charlie and Ruth Haden, and it sat on the table for the longest time. We just looked at it every day and thought, “Oh, it’s just so beautiful and open and heartfelt-like Felicia was.” So I wrote this theme, and then added one of her favorite songs, “Wildwood Flower.”

One of Charlie’s favorites too.

I call it “Flowers for Felicia,” and I feel like this piece really captures her heartfelt beauty.

[The album has] got to be hard to listen to sometimes.

The title track was written for my mother when she passed away. And Felicia plays on the original recording, on [2005’s] Humidity. I wanted to re-record that tune because she was a part of that tune then. And Kirk plays her part on cornet. She was a great violinist, and she was getting really into wanting to be part of improvising.

She was a teacher, and one of the things I realized recently, after attending a memorial service for a friend, is how many people teachers can affect.

We have on her stone-somebody wrote this and [my daughter] Audrey and I kind of paraphrased it-“Most people search for happiness, but she created it.” I really believe she was a joyful person. But my children are great, and they’re courageous and brave. We’re just trying to adjust. I’d like to say it’s getting easier, but some things get easier and some things get harder.

As our children get older, the problems are different and not as frequent, but they can involve bigger life issues.

About “Beginning of a Memory,” I think it’s a beautiful, meditative track. Also, Andrew D’Angelo and Felicia were very, very close. They had a real rapport, also having gone through similar battles. [Ed. note: D’Angelo battled brain cancer.]

The way Andrew plays his melody on the original version is really neat, because he was close with my mother too. The way he plays it on here is saxophone playing that I’ve never heard before, and I’m not sure we’ll ever hear again.

It is interesting how fellow musicians and people in the jazz community become like a family. We know it’s not a family, but it’s pretty damn close.

It’s very close. I really do think of them as family, and when you have [people] with big hearts, like all of them, it’s very special. I wanted that raw feeling, with the blemishes all there. I’m proud of all my recordings, and this one is just another chapter that captures a beautiful time celebrating someone I loved very much, and continue to love very much.

As the lights dim, a dog wags its tail as it looks up at its master, a tall, clean-cut man whose silhouette fills the doorway … END_OF_DOCUMENT_TOKEN_TO_BE_REPLACED

Depending on how he looks at it, Kenny Garrett’s latest album, Sounds from the Ancestors, has been out for an eternity or an instant. Recorded … END_OF_DOCUMENT_TOKEN_TO_BE_REPLACED