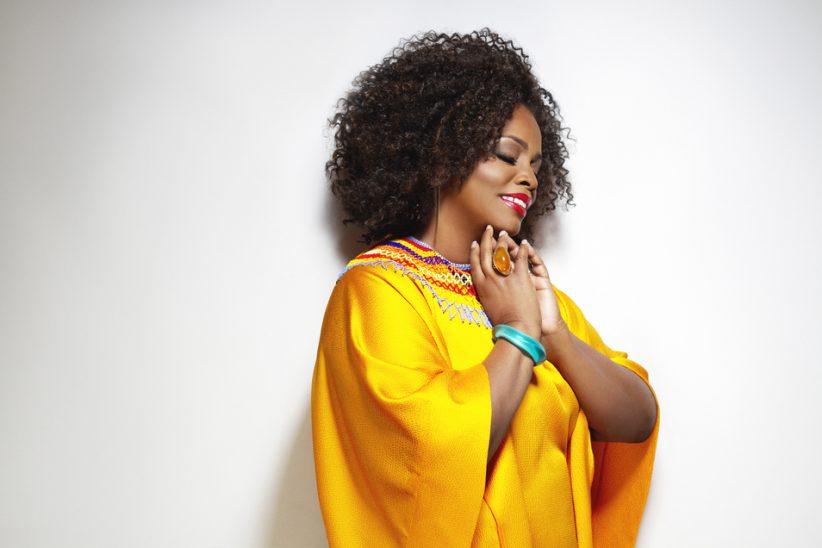 There are rare moments in music that take my breath away. One in particular was Dianne Reeves’ recent July performance at the Westhampton Beach Performing Arts Center in New York. The evening sparked off with her band-guitarist Peter Sprague, pianist Peter Martin, drummer Terreon Gully and bassist Reginald Veal-tearing into Afro-Cuban rhythms and rich textures, filling the auditorium with wild anticipation.

Enter the five-time Grammy Award-winning vocalist, composer and producer, beautifully draped in a golden ethnic wrap, her braided hair in a stylish upward swoop. The band became one with her as she stepped into the spotlight, while the audience roared with applause and welcome. This was a chance to hear one of jazz’s most versatile improvisational scat singers.

As she approached the stage with a smile, I noticed a hint of sadness in her eyes. It was at that moment that she encouraged the audience to stand strong and to love their fellow man, in the wake of recent violence by and against law enforcement and the racial tension in this nation and abroad. I felt her pain.

A few song selections were reflective of her life, like my favorite, “Nine,” which took us back to her childhood and our own; we joined her in remembering how we as children could not wait until we were 9, then 13, then 20 and so on. This joy of living is also reflected in her latest album, last year’s Concord release Beautiful Life, which won her a Grammy for Best Jazz Vocal Album and a nomination for the NAACP Image Award for Outstanding Jazz Album.

There were also a few covers, including her impeccable scat of Pat Metheny’s “Minuano (Six Eight).” She managed to bring many of us to tears by the concert’s end, bidding us farewell and offering a reminder to love our fellow man. A lengthy standing ovation followed, with an arm-in-arm bow.

Following the concert, I was able to speak with Reeves (for the second time) about her life in music.

GB: Do you feel you’re where you want to be in your career at this time in your life? You’ve been at this for a few decades now.

DR: Yes, I really do. I feel like I’m in a good place. I’m in a place where I can make all kinds of choices. I can just be myself. I can make the music I want to make, and sing in the places and go to the places I want to go to, so it’s a good time. I love that [there are so many musicians with] a collaborative spirit that’s so available right now. I think it’s always been [that way], but even more so now. So I’m loving that, because it’s in those collaborations that you find new things about yourself.

Yes, I heard that in your Beautiful Life release. I noticed the collaborative gathering of artists such as Esperanza Spalding, Gregory Porter, Gerald Clayton, Robert Glasper and your late, great cousin George Duke, along with many others. I thought to myself, “I wish I had been present during those recording sessions.” I read where you said that the meaning of Beautiful Life was recognizing and walking in the blessings. Where are you in your life, with walking in that place with God and music?

Yes, [I’m] holding on. You know, try to really keep the hope alive, as we’ve heard many times. Also, trying to shine as bright as I can. This is a time that we need to shine the light on a lot of the darkness that is encroaching upon us today. I feel everything that’s going on, all sides of it, and one of the things that I know for sure is that music has always kept me pretty centered, and it’s a place where I can let go, and be, and share, and give, and be the light that I want to be. So I’m always praying to God to keep me lifted, to keep everybody lifted and in a place where I can think clearly, and be conscious, and really, really hear in my spirit the direction I’m to go.

I saw that this evening when you were onstage and you mentioned what’s going on in this nation and in the world. And I saw the pain in your face, because we know we’ve had some news today. [Ed. note: Reeves’ concert took place on July 17, the day three law enforcement officers were shot and killed in Baton Rouge, La.] I thought, “I can’t take another bad report.” Like you were saying, we must be conscious and be able to hear.

Right. This is a time, because of the news outlets and social media, people are expressing their anger and their emotions without clarity. We have to see the bigger picture, that we really are a nation in need of healing … everybody. I was talking to a friend of mine the other day, and we were talking about how, when we were kids, we used to say the Pledge of Allegiance in school: “One nation under God, indivisible, with liberty and justice for all.”

I had forgotten about that. I mean, we used to say that every single day. We didn’t know at the time what we were saying, but it was getting into our spirits. We just have to remember that, and we have to remember that without humanity we will descend into something that will be like hell.

Do you think you’d like to participate in something similar to Quincy Jones’ “We Are the World,” where [musicians came together to raise funds for humanitarian aid in Africa?]

I’m open. Absolutely. I know that Harry Belafonte is putting together a big project in October in Atlanta, with musicians from all over the world. It’s starting to come out and be announced, and he called and asked me if I would be a part of it and I said absolutely.

When you were walking around onstage I could see this light on you, and it wasn’t the light from the spotlight. It was the light in you. … Do you know that you are bringing people to an awareness that there’s something greater than themselves?

I am so glad to know that. I submit. I’m always just submitting daily, because you just have to, you know? Especially when I walk onstage, because words are powerful and [because of] the energy that music has. And I have a very, very special band that supports me not just musically but spiritually. They feel it and everybody’s obedient; we try to be as much as we can. We let go and basically let God.

Yes. Obedience is key to walking in the Blessing.

I agree. I love you with your band, of course, but do you ever think you’ll record an album a cappella? Your voice is as clear as a bell.

I never thought about it. I’m open.

Do you sing to yourself?

To myself? No! [laughs] That’s funny! You know, I have a hard time even listening to myself.

Yeah, I do. I’m very critical, but I don’t have a hard time in the moment when it’s happening, because it’s like being taken over, so that feels good.

If I had a voice like yours, I’d sing myself to sleep. What can we look forward to next with your television projects? I recall watching an episode of Sex and the City and I saw you singing “Is That All There Is?”

I’m open to all of that. I’m getting ready to do a record in Marciac, France, in August, so I’m looking forward to that.

As the lights dim, a dog wags its tail as it looks up at its master, a tall, clean-cut man whose silhouette fills the doorway … END_OF_DOCUMENT_TOKEN_TO_BE_REPLACED

Depending on how he looks at it, Kenny Garrett’s latest album, Sounds from the Ancestors, has been out for an eternity or an instant. Recorded … END_OF_DOCUMENT_TOKEN_TO_BE_REPLACED