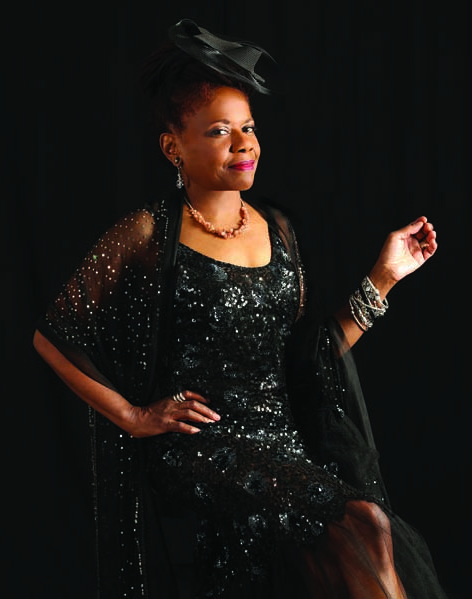 In late September, Catherine Russell, 60, bustled into the little French restaurant in Greenwich Village exactly at the stroke of 2 p.m. Just back from a weekend concert at a jazz festival in Bogota, Colombia, she had come to talk about her latest album of classic jazz, blues, standards and R&B, Harlem on My Mind (Jazz Village).

She is grateful for, if a bit surprised by, the midcareer surge that has taken her from in-demand, first-call backup singer to rock and pop stars (Steely Dan, David Bowie and Cyndi Lauper among them) to her new status as the foremost vocal interpreter of vintage jazz and R&B songs from the ’20s to the ’50s. Her respect for musical tradition was forged by her parents: famed bandleader and longtime Louis Armstrong musical director Luis Russell and Carline Ray, the Juilliard-trained bassist, guitarist and singer who performed with the International Sweethearts of Rhythm, Mary Lou Williams and Ruth Brown.

Russell’s sixth album, dedicated to her parents, is a celebration of the African-American songbook. It features tunes originally sung by Billie Holiday, Ethel Waters, Dinah Washington and others, going beyond the familiar to dig up buried treasure like the Clarence Williams tune “Swing! Brother, Swing!” (an early Holiday recording). The overall production is sparkling because Russell sweats the details-researching repertoire, using authentic-sounding arrangements (including five gems by saxophonist Andy Farber for a tentet) and donning the appropriate vintage clothing, jewelry and millinery in the package photography. “You’ve got to find the right people to help you make this music,” she said.

JazzTimes: You’ve performed all kinds of music over the years. Why have you made it your special mission to reclaim these vintage pop and R&B songs from the ’20s to the ’50s?
Catherine Russell: Well, that’s what I like. I love swing. I love the way music sounded in those decades. You also have to be realistic in this business. A long time ago I thought I was going to be a rock ‘n’ roll artist. That wouldn’t have been a good road to go down. Just count the amount of people like me who are successful in rock ‘n’ roll!

As the daughter of Luis Russell and Carline Ray, you must have heard some incredible music growing up.

I listened to everything. Classical music; I love Bach. My mother was an opera aficionado, so we used to listen to Live From the Met and the Make Believe Ballroom with William B. Williams-Frank Sinatra, Steve and Eydie. … Later, as a teenager, I was a Deadhead. I always liked music with a pulse that you can move to. It could be Irish music, James Brown, Chuck Brown. My mom was a bassist, so I was always listening to the rhythm section.

You were known for decades as a great backup singer, but you didn’t begin your solo career until your late 40s. Did you always aspire to a solo career?

No. I know what goes into leading a band, and it wasn’t something I wanted to do. It’s not only the show; it’s the business, the travel, running the band. After teaching vocal performance at Berklee in the late 1990s, I went on the road with Bowie for two years. When I came back from that, my business partner [now husband] Paul [Kahn] said, “You should make an album.” I said, “Nah. I don’t really see the need to do that. I have a nice career as a backup singer. I get to sing lead with different bands.” It worked fine. In fact, it still does. The calls I get are good ones, thank goodness.

But Paul had a friend in Skokie, Ill., with a studio. We put together an album’s worth of material. After that, Paul invited some record company people to hear me sing in New York, which turned into a recording contract with Harmonia Mundi. Those tracks we cut in Illinois became my first album, [2006’s] Cat.

How did you go about picking the songs for the new album?

All the singers and songwriters represented had roots in Harlem: Fats Waller, Benny Carter, Dinah, Little Willie John-they all played the Apollo. And my dad, Luis Russell, had a big hit with “The Very Thought of You,” which I do on the record.

Your core band has been together for years. How did you find them?

I’m blessed to have found people who are of the same mind as me about this music. There are maybe a handful of people who play early jazz well, and I seem to know most of them. [laughs] I first heard [guitarist] Matt Munisteri about nine years ago and pursued him. Now he’s my musical director. Matt introduced me to [pianist] Mark Shane. And Tal Ronen [bass] and Mark McClean [drums], they’re all terrific musicians. … I like a certain sound. To get that sound, there has to be space. They understand the vocabulary of what we’re doing-like not playing bebop over a ’30s swing tune.

How did you meet Donald Fagen and Walter Becker?

In the mid-1980s, I sat in sometimes at a club in Manhattan where [guitarist] Jimmy Vivino was the bandleader. Sometimes big names would drop in. Donald used to come, and occasionally he’d sing a Steely Dan tune with the band. So I found myself onstage with him one night. One thing led to another, and I was invited to tour with his “New York Rock and Soul Revue” in 1992. When Steely Dan reunited in 1993, he invited me to join them, and I toured with them until 1996. I was on Everything Must Go, and Donald’s solo albums Kamakiriad and Sunken Condos.

I can’t say enough great things about Donald Fagen. He’s been a mentor to me. … He’s got a million-song playlist, and he makes playlists for me and his other friends. He has turned me on to singers I didn’t know. He’s so knowledgeable about every era of music.

Working with David was a dream come true. I’d been a fan since 1971. He was such a gracious man, and musically generous. He brought out the best in me. In addition to background singing, he let me play several instruments: keyboards, percussion, guitar and mandolin. He allowed me to stretch beyond what I thought I was capable of. He was caring, funny and loved his family. I am blessed to have known him.

You sing with so much conviction. How much of that is life experience and how much is a result of your acting training? [Russell is a graduate of the American Academy of Dramatic Arts.]

I like good melodies and good stories, especially when I can relate to them. Like Dinah Washington’s “Let Me Be the First to Know.” That story happened to me. I’m still great friends with that person. But everybody knew [the relationship was ending] before me. … And I like “I Can’t Believe That You’re in Love With Me” because I found my life partner later, when I was in my 40s. That’s what that song says to me: I just can’t believe my good fortune at last!

As the lights dim, a dog wags its tail as it looks up at its master, a tall, clean-cut man whose silhouette fills the doorway … END_OF_DOCUMENT_TOKEN_TO_BE_REPLACED

Depending on how he looks at it, Kenny Garrett’s latest album, Sounds from the Ancestors, has been out for an eternity or an instant. Recorded … END_OF_DOCUMENT_TOKEN_TO_BE_REPLACED