Skip to content
Become a member and get exclusive access to articles, live sessions and more!
Start Your Free Trial
Home > Features > Donny McCaslin: The Gig of a Lifetime 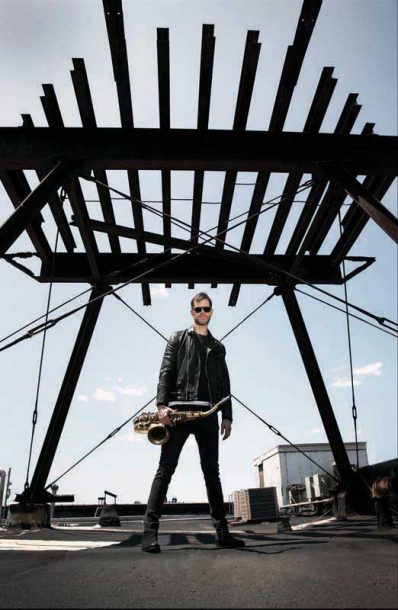 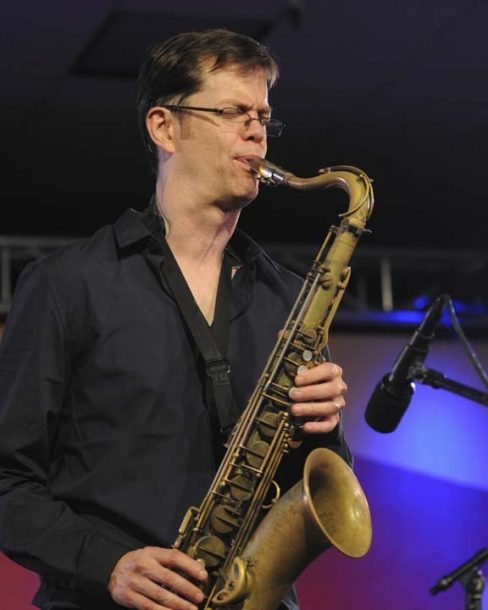 Donny McCaslin’s latest disc, Beyond Now (Motéma), contains colossal emotional weight. The tenor saxophonist composed the album’s original music in the summer of 2015, several months after working on what would become David Bowie’s final album, Blackstar. Given that McCaslin’s bandmates—keyboardist Jason Lindner, bassist Tim Lefebvre and drummer Mark Guiliana—also participated in the Blackstar sessions, it’s not surprising that Bowie’s influence saturates Beyond Now. “[Blackstar] was still swimming inside my head,” McCaslin confirms. “But there are other things too. I got deeply into Deadmau5’ while(1<2), a lot of Aphex Twin and Kendrick Lamar’s To Pimp a Butterfly. Those are the other main influences, besides Bowie.”

In one of the cruelest ironies in rock history, Blackstar was released on Jan. 8, 2016—Bowie’s 69th birthday—and the icon died of liver cancer two days later. McCaslin and company recorded Beyond Now just three months after Bowie’s death. “Making Blackstar was such a profound experience for all of us. I wanted that same level of emotional gravitas to come through on Beyond Now,” McCaslin says.

As on McCaslin’s previous seven albums, alto saxophonist David Binney lends his production acumen to Beyond Now. The results are noir-ish escapades marked by ominous electronica textures, menacing rhythmic interplay and McCaslin’s scorching saxophone work, which, on numerous occasions, such as the moving rendition of Bowie’s “Warszawa” and his melancholy original “Glory,” flares with transcendental fervor. Right before embarking on a European tour in the fall, McCaslin, 50, talked about the making of Beyond Now and its relationship to Blackstar, and touched upon the personal and professional impact Bowie had on his life.

JazzTimes: Describe the emotional tone during the sessions for Beyond Now. Was it mournful, celebratory or a mix of both?

Donny McCaslin: Sometimes while recording, I had to pause and reflect on everything that had happened, then get myself in the right frame of mind. We are all friends; whenever we are together, there are a lot of laughs. So I didn’t think [the sessions] were mournful. It was more celebratory, because we were all within the moment of the music.

I was definitely thinking of David when we recorded “Warszawa,” because that tune just has so much meaning for me. A couple of weeks after he passed, we did a gig at the Village Vanguard. As a band, we talked about how we should pay tribute to him. Jason suggested that we try doing “Warszawa,” so we played it during sound check, then we started playing it every set, every night that week. That was an extremely difficult time for us emotionally. To have that song as a way to channel all of our feelings about his passing into music—I’m very grateful, because it’s a great song.

Were you familiar with “Warszawa” before Jason suggested it?

I knew the record [that song appears on], Low, but I didn’t know it intimately. When Bowie and I started working together, I was generally aware of his hits. At some point before we recorded Blackstar, I started really checking out his discography so that I would be really informed.

Then I realized that David hired us to do what we already do. I didn’t want to be too influenced by his earlier music, so I stopped checking out the early stuff and just focused on the music that he sent me to be recorded. After we finished, I started listening to his older stuff again, Low included.

You also cover “A Small Plot of Land,” from Bowie’s 1995 album,
1. Outside. The commonality between that and “Warszawa” is Brian Eno. Did that inspire your selections?

I was just drawn to those tunes. It just so happens that they are from times he worked with Brian. “A Small Plot of Land” came about from David Binney and I emailing each other back and forth about different song possibilities. That song was one on his list. I didn’t know that song before. When I started listening to it, I knew it could be a good fit for us. I think the commonality you’re referring to is the looseness about those tunes; there’s something about those tunes that makes great bridges between what he did and what we do.

What did Bowie pull out of you artistically that you didn’t expect to use during the sessions?

The first thing that comes to mind is that as I was listening over and over to the tunes, I orchestrated the woodwind stuff. I remember getting the idea of using alto flutes, clarinets and counterpoint. So I think from being so involved in those tunes I got a chance to bring my voice to them as an orchestrator. That’s something that doesn’t usually happen for me, so orchestration is something that came out that I wasn’t expecting.

Beyond all the artistry of David Bowie, what do you miss most about him?

I miss his humanity. He was such a wonderful person and so great to be around. You just felt his presence the moment he walked into the room. Obviously, most of the time we were with him we were working; you felt this intense focus, but there was a calmness about it. His focus wasn’t manic. He was so warm and generous. I really miss the person. Originally Published February 6, 2017

Depending on how he looks at it, Kenny Garrett’s latest album, Sounds from the Ancestors, has been out for an eternity or an instant. Recorded … END_OF_DOCUMENT_TOKEN_TO_BE_REPLACED

As I delved ever deeper into the 14 albums that document the Larry Goldings/Peter Bernstein/Bill Stewart trio to prepare for our January Zoom conversation, what … END_OF_DOCUMENT_TOKEN_TO_BE_REPLACED

The musical avant-garde is an area where creative people who have earned wisdom through a lifetime of experience can flourish. Wadada Leo Smith, who last … END_OF_DOCUMENT_TOKEN_TO_BE_REPLACED

Wisconsin-born and proud: For all of the avant-everything complexity Ethan Iverson has applied to his solo projects or the sounds he created in his role … END_OF_DOCUMENT_TOKEN_TO_BE_REPLACED