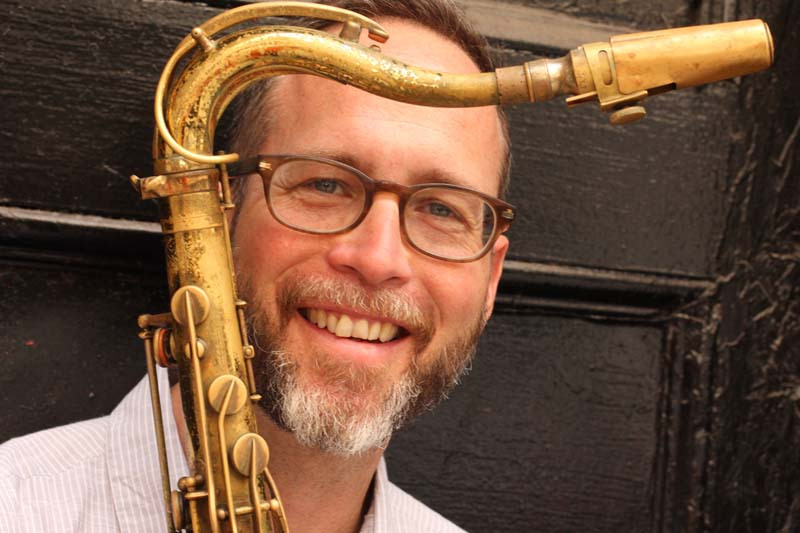 Saxophonist and composer Michael Blake’s 14th album, Tiddy Boom (Sunnyside), gestated in 2013, when he turned 50. A devotee of Coleman Hawkins since his teens, and a more recent acolyte of Lester Young, Blake applied for a grant from Chamber Music America to support him in preparing a suite of compositions titled Contrasts in Individualism. In it he reinterprets, in his own argot, the contrasting styles of those two roots of the tenor saxophone tree.

With the funds, Blake self-produced this new eight-tune disc that captures the essence of his subjects. The title stems from Young’s famously onomatopoeic instruction to drummers on how to articulate his preferred ride-cymbal beat. Stylistic Xeroxing is decidedly not the point-it’s a swinging affair, though drummer Rudy Royston intersperses more bombs than Young would have cared for 60-plus years ago. Yet the language and gestures of midcentury Hawkins and Young filter through, transported into present tense via interplay between the leader, pianist Frank Kimbrough and bassist Ben Allison.

“The tunes almost could have been written in their era, but you also recognize Michael’s signature sound,” says Allison, who recruited Blake into New York’s Jazz Composers Collective in 1995, and has performed with him in various projects ever since. “Michael always had an uncanny knack for weaving something from the language of Coleman Hawkins or other saxophonists into his own conception in a very creative way. He’s remarkably free of cliché. He doesn’t even repeat his own licks, the language he’s developed for himself; many times I’ve heard him play something that I know he never played before.”

“It’s almost like I’m a schizophonist,” Blake jokes, referring to the multitude of voices that he refracts within the burnished flow of his long, elegant lines. From first note to last his solos are complete statements, and he eschews altissimo, remaining in his tenor’s middle range. His solo on the Tristano-ish “Coastline,” based on “In a Mellotone,” channels the fluid grace and rapid-fire brilliance of Young acolyte Warne Marsh. On “A Good Day for Pres,” built on one of Young’s classic motifs, he sings in octaves, in unison with the line, in the manner of Eddie Harris; he also deploys this technique on “The Ambassadors,” an homage to Jim Pepper that closes the album. “Hawk’s Last Rumba” and “Skinny Dip” feel like unreleased gems from Hawkins’ early ’60s dates with Tommy Flanagan. “There’s like a bag of guys in there, and those are my friends,” Blake continues. “They get along, which is good.”

A similar aesthetic permeated Blake’s early recordings-Kingdom of Champa, his well-received 1997 leader debut, and its follow-up, Drift. Then a key tonal personality in John Lurie’s Lounge Lizards, he deployed colleagues like Steven Bernstein, Billy Martin, David Tronzo and Bryan Carrott to render pieces that coalesced disparate genres-Vietnamese folk music, Fela Kuti, the Éthiopiques CD series, R&B and soul balladry-with minimal pastiche. In 2005, on the sessions for Amor De Cosmos, Blake chased a more unitary sound, presenting a sextet of world-class creative musicians based in Vancouver, his hometown, with an array of rhythms and compositional approaches. More recently, on the 2011 quartet recital In the Grand Scheme of Things, Blake exploits trumpeter JP Carter’s and keyboardist Chris Gestrin’s facility at seamlessly shifting between electronic and acoustic feels.

“In Vancouver, I’ve been shooting for a more contemporary, almost pop-centric idea,” Blake says, adding that their position outside New York allows “a relationship of unlimited possibility and openness.” In contrast, he conceived Tiddy Boom as “completely devoid of excessive arranging, strange instruments, post-production or any extra things I love doing to make my music sound different.” He credits Lurie with demonstrating what was possible “if I’d hear how people play, write for those personalities and give them the opportunity and space to do that.”

On Tiddy Boom, Blake finally applies that principle to himself. “I was always so adamant about avoiding the classic AABA form, trying to make something new and fresh happen to form and solos,” he says. “Where is the improvisation? Where is the written? On Champa, those lines were invisible. Here, I embraced the format. I didn’t feel boxed in. I decided to let the good stuff happen organically, and not sanitize the nuances and things that are magical and mysterious by writing them.”

Depending on how he looks at it, Kenny Garrett’s latest album, Sounds from the Ancestors, has been out for an eternity or an instant. Recorded … END_OF_DOCUMENT_TOKEN_TO_BE_REPLACED

As I delved ever deeper into the 14 albums that document the Larry Goldings/Peter Bernstein/Bill Stewart trio to prepare for our January Zoom conversation, what … END_OF_DOCUMENT_TOKEN_TO_BE_REPLACED

The musical avant-garde is an area where creative people who have earned wisdom through a lifetime of experience can flourish. Wadada Leo Smith, who last … END_OF_DOCUMENT_TOKEN_TO_BE_REPLACED

Wisconsin-born and proud: For all of the avant-everything complexity Ethan Iverson has applied to his solo projects or the sounds he created in his role … END_OF_DOCUMENT_TOKEN_TO_BE_REPLACED