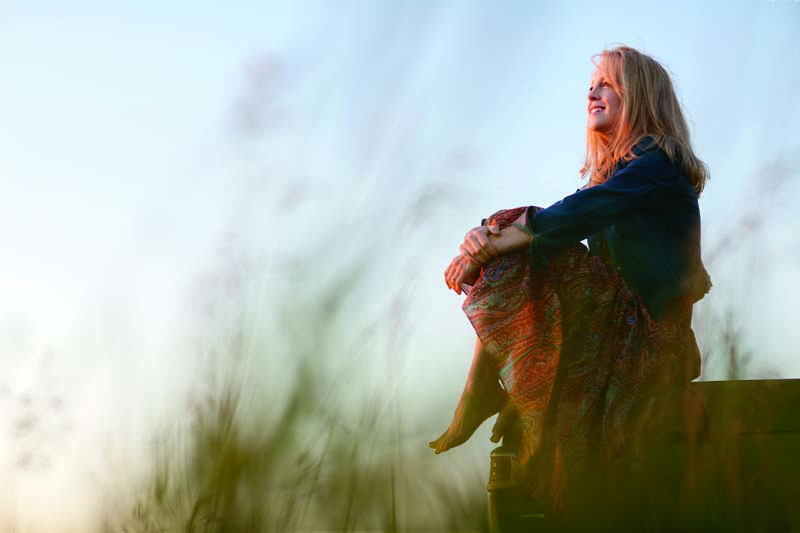 Maria Schneider, 54, has always drawn inspiration from the natural world and from her Midwestern upbringing, but on The Thompson Fields (ArtistShare), those elements come together in a vibrantly pastoral, movingly impressionistic portrait of a vanishing landscape. The Thompson Fields is the first album from Schneider’s acclaimed orchestra in eight years, during which time she continued performing and collaborated with soprano Dawn Upshaw and David Bowie.

The new album pays homage to a neighboring farm where the composer spent much of her childhood in southwest Minnesota, a sparse but beautiful prairie far removed from the crowded urban snarl of New York City, where she lives now. The disc is housed in a hardbound package nearly as gorgeous as the music within, featuring photographs of Schneider visiting the Thompson farm along with paintings of birds-of-paradise by John James Audubon and vintage maps of Minnesota and the upper Mississippi.

Most bandleaders claim to write with specific musicians in mind, but the longevity of Schneider’s ensemble translates to an unparalleled sense of how to compose for soloists and maintain a cohesive vision. That’s evident from the outset, with an adaptation of “Walking by Flashlight,” from 2013’s Upshaw project, Winter Morning Walks, with Scott Robinson’s lyrical alto clarinet speaking with the clarity and narrative arc of a master storyteller. “Arbiters of Evolution,” inspired by the showy plumage of those birds from the Audubon artwork, embeds the robust playing of Robinson (on baritone saxophone) and Donny McCaslin (on tenor) in a bristling, preening concerto. Another album highlight, “A Potter’s Song,” a tribute to the late trumpeter and longtime orchestra member Laurie Frink, is intimate and delicate in its collective lamentation.

What did the Thompson farm mean to you growing up?

Many of the best parts of my childhood I associate with the Thompsons. I grew up on the outskirts of the small town of Windom, and the Thompson family and my family were very close friends. We spent quite a lot of time out there. They were wonderful people who lived life in a very big way. They had a deep appreciation for nature and the outdoors; birds and wildlife were a huge part of their life, as they are mine. All sorts of really interesting people came to the farm from all over the world, even though this was a tiny rural town. So it was a world that felt big and open to me growing up in this small town on the plains.

Nature seems to be a constant source of inspiration for your music.

It’s a big part of my life. I’m a believer that whatever your artistic medium, it’s bound to reflect what’s in your life. For me, the part of the world that makes me feel a sense of wonder is the natural world. That’s what makes my jaw drop and makes me feel like expressing music. I’ve never been a person who’s in love with music just as music. I’ve always loved music that’s a conduit

The Thompson Fields certainly isn’t overtly political, but is there an environmental message to the album?

You can’t really preach to people and get anywhere. It’s more about sharing what I love and hoping that it excites people to be curious about it if they’re not already, or if they are, to remind them. A lot of what’s wrong with this world is that people don’t feel inspired. Having a computer or doing things in a big city can be fun and inspiring in a lot of ways, but there’s no connectedness to life and existence, like when you’re out encountering many forms of life and faced with bigger questions.

You brought the members of the orchestra to the farm and your hometown. What impression did that trip make on them?

The sheer vastness and emptiness of it was a bit of a shock. But hanging out at this old, beautiful farm, with Tony [Thompson, a longtime friend] making antelope on the fireplace and flan in an old cast-iron kettle, I think they could all see why I love that place so much. Playing in Windom, I remember [orchestra pianist] Frank Kimbrough being amazed that the whole foundation of my life was sitting there in that audience. So much of my music has been autobiographical, so when we would perform pieces like “Scenes From Childhood” or “The Pretty Road” and I would talk about those pieces, you could see in the faces of the audience how much they related to everything. The guys were amazed that after so many years I could go back there and it all still existed, and that there was a collective knowing and remembering and nostalgia for those same things and people.

You’ve worked with some of these musicians for more than 25 years. What impact does that have on your writing for the orchestra?

What it does for me as a writer is difficult to know because it’s so subliminal. You talk to people differently because of your relationship to them; you might talk to your mother one way, a very close friend another way, and you’d talk to me a different way because you don’t know me. When you know the other person, you know that you can get away with a certain trust or confidence or sarcasm. Writing music and working with musicians, it’s the same thing.

You’ve also enjoyed a long association with the crowdfunding platform ArtistShare. Beyond simply allowing you to fund your projects, what advantages have you found in that model?

That’s another thing that’s almost impossible to answer because it’s such a huge part of my life now. I’ve met so many wonderful people that enjoy being a part of the making of this music in a very big and generous way. It feels like I’m making music for real people, as opposed to just making a recording and throwing it out into the world.

You’ve been a pioneer in the crowdfunding of music, but you’ve also been vocal in your opposition to streaming music services. Do you feel we’re at a crossroads in terms of how the digital realm is affecting musicians?

One of the biggest problems to me is that musicians don’t stand up and say, “I want to choose my own destiny. I want to tell people what my music costs.” Streaming isn’t about selling music, it’s about selling ads and data. That concept is dangerous, because you’re training an audience to think that music is free content for other purposes. So any musician that allows a publisher to throw their music up there where it’s anybody’s guess whether you’re going to make anything from it is just insanity; it’s self-destructive and cannibalistic. Originally Published September 5, 2015

Depending on how he looks at it, Kenny Garrett’s latest album, Sounds from the Ancestors, has been out for an eternity or an instant. Recorded … END_OF_DOCUMENT_TOKEN_TO_BE_REPLACED

As I delved ever deeper into the 14 albums that document the Larry Goldings/Peter Bernstein/Bill Stewart trio to prepare for our January Zoom conversation, what … END_OF_DOCUMENT_TOKEN_TO_BE_REPLACED

The musical avant-garde is an area where creative people who have earned wisdom through a lifetime of experience can flourish. Wadada Leo Smith, who last … END_OF_DOCUMENT_TOKEN_TO_BE_REPLACED