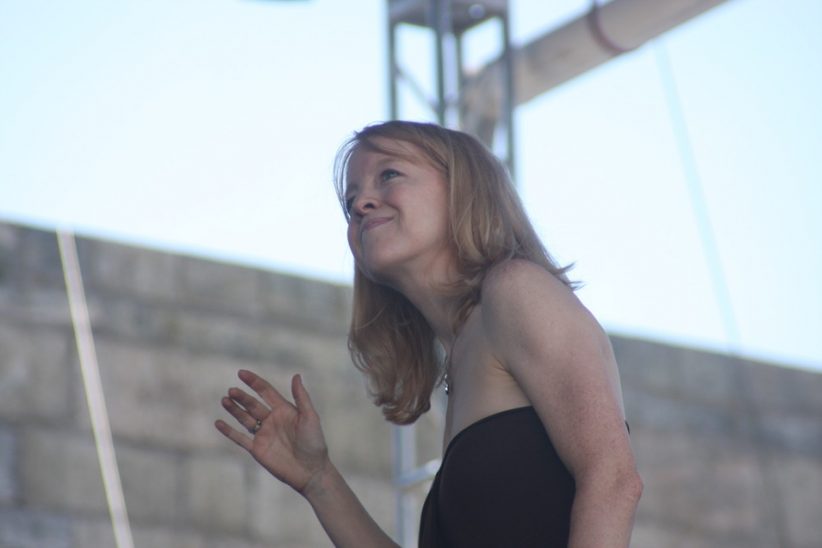 Composer Maria Schneider draws inspiration from a wide range of sources, from the Fifth Dimension and Brazilian music, to ballet and stride piano. She also cites her health conscious lifestyle and band mates’ influence as equally important elements in her ongoing musical development. Maria approaches jazz as a shared, not competitive, experience, and feels it is important to help others understand jazz and the creative process.

I talked with Maria at her apartment in NYC in 2004 in an interview for my Judy Carmichael’s Jazz Inspired radio show.

Judy Carmichael: Maria talked about something we both love: stride piano.

Maria Schneider: The area of Minnesota where I’m from is pretty isolated from music culture, you know, certainly jazz itself. Southwest Minnesota, small town, and the way I became exposed to stride was that this woman had moved from Chicago to Windom in 1965. I was five years old and her name was Evelyn Butler and she’d been a stride pianist and she played boogie woogie. And she also was a fabulous classical pianist. Really amazing. She was kind of like Dorothy Donegan a little. She had that humor, you know, that Dorothy would like, laugh and look out at the audience and you know, and Mrs. Butler would play runs and go off the end of the piano and laugh.

She had this very joyful, boisterous way about her and she had a face like Dizzy Gillespie, but she had red hair! It’s hard to describe her, but she was just an amazing woman. So she came to town and my parents invited her over for dinner and I heard her play and of course, I was only five but I flipped out and I had red hair and I just wanted to be her. And so she immediately started teaching me harmony. First lesson, she said “I want you to understand why the things you play sound the way they sound.” So she played a major triad and sang “Bright the day” and then a minor triad, “Dark the night.” And she started from there and then just simple chords and then, I think, already, when I was eight I was doing little stride versions of Ja Da, and things like that. It was really great. It was fun.

And the fact that she was into teaching you from that aspect and wanted you to know harmony, because I know my teacher didn’t do that. And I was constantly asking for it. It’s such a hole that you have in your training without learning theory. And there’s no reason you can’t do it right from the beginning.

Right, of course, because the first pieces that you ever play start maybe with a one and a five chord, so and then as they get more and more complex, so does the harmony and so it just follows, that it’s logical to teach somebody that as they go.

I love that you had a woman model, as another woman. Because I’m saying it isn’t something that you see a lot. I certainly didn’t see people, I mean Dorothy Donegan was one of the first really wild, big, powerful women pianists that I heard, you know, and everyone else I’d heard were guys.

You know what’s so funny, when I came up and I moved to New York and I did my first recording and then people started to interview me, and I remember the first person that asked me what it was like to be a woman in jazz, it had never occurred to me-believe it or not-it had never occurred to me that that was something strange. And then I thought about it. I thought, oh my God, it is true, in college they were all guys and I couldn’t figure out why I was so completely oblivious to this thing and then I realized it’s probably because my first role model was a woman. And also there was also a great (patron in Windom) who was a woman and she was a friend of my mother’s and she kind of mentored my sister. I kind of grew up thinking that the artists of the world were women.

Deep in my being I believed that, and then I of course, later, didn’t really happen to notice that the ones who were actually recording and getting in the museums were men. I missed that, that step in my logic, but it’s pretty amazing.

But I think it’s good. You just forged ahead.

I had no self-consciousness about it.

I didn’t either. I’m just thinking I didn’t have women musicians that I heard, but people would ask me too, in interviews “What’s it like to be a woman in jazz.” I said, “Well, I’ve never been a man in jazz.”

Yeah, I wanted to say to them, “What’s it like to be a man doing this interview?” Like, are you conscious of yourself being a man? I never think about myself being a woman when I sit down to write or when I’m in front of the band. You’re listening, you’re making music, you’re just, you’re a musician, right?

Do they comment on that as much in classical music, because they do in jazz, and you’ve been classically trained as well?

I think it’s not quite such a big deal. I think they talk about it all over the place though.

I think they do.

Yeah I think so.

Do you think you bring something different to it? I get to ask you now.

I think I probably do just, like, I bring something to music because of my background being what it is, that it’s sort of, I think that my music is sort of stereotypically feminine. When I conduct I feel very free to conduct in a very kind of dancerly way. If I was a man, maybe that would be weird. You know my music is very expressive. I remember in the beginning I was paranoid about writing too pretty and now I don’t care about that, because I love beautiful.

The joy of creating music for me, is creating beauty. That’s what I love about music, so why should I feel pressured to create something that’s very intense and you know, heady? It’s not my thing.

And you do bring a sensitivity to it that’s very different.

Well, I think it’s one of the things that’s great, you know, as more women do play this music because there hasn’t been a huge female input. There’s certainly been, women that have been doing this, but it’s interesting because we, we’re women, we bring something different to it.

We can’t say it, like a man can’t say what he brings to it exactly. But it’s just like, it’s wonderful when music comes from all different countries, it’s good when it comes from different sexes.

Tell me about your early jazz education.

This sounds so insane, when I tell people this, they don’t even believe it. I really didn’t realize anything about the history of jazz or that jazz had evolved. I thought I was born in the wrong era.: ‘She never told anyone her age, but she looked like an old woman with a child’s spirit.’ So when I got to college, it was this guy, heard me playing something in my room. And then he said “I have some jazz records. You want to hear them?” So he brought me down, he said “Here, try this” and he gave me Coltrane and Herbie Hancock and all of a sudden I was like “Oh My!”

I started discovering the whole history of jazz because at the University of Minnesota, they didn’t have a jazz program. And I was just a theory/comp major. I was a theory major then I moved into composition but then I started immersing myself in so much jazz, it’s all I could listen to. And then my composition teacher said-they had a big band-he said “why don’t you go listen to the big band” which I didn’t even know there was one, and he said “I think you should start writing for them because your music’s becoming so influenced by jazz.” So then I just watched him rehearse every day and who was playing what and there was one guy in the band that was doing some writing so I started taking some lessons with him and he sort of taught me a few things. And in a way, I’m glad that I learned, that I stepped into it without somebody saying, okay, here’s step 1, here’s step 2 because I really don’t care so much about bowing to the history of jazz or whatever, I just see my music as pop music and sort of Simon and Garfunkel, and you know, sort of all the things I like in my whole life are kind of rolled into this ball. It couldn’t be played by non-jazz musicians, I know that. But it also couldn’t be played by musicians who didn’t have a lot of classical training too. So, it’s everything.

It’s nice to hear you say this, because I think that sometimes jazz education can get very rigid and you’re told to learn this, learn that. There is a structure that’s adhered to, but you kept evolving, it sounds like, as you heard things that you liked.

I think they do that because, how else do you teach a room of 20 people something unless you, and as a teacher, you’re forced to come up with some structure and get results that everyone’s doing something by the end of the semester.

But the danger is that the most important thing in this music is, like in any music and in any art, is that people develop their own sense of their own personal voice and story and that very often comes out of doing things in a very unorthodox way. So, if somebody teaches you all the rules of writing before that teacher gets to hear what the little quirks, what the little unorthodox things that a student might do had they not been taught the right way to do it, you kind of iron out the wrinkles that could end up being the voice of that person. And I think that’s a real danger, I really feel that the first thing that should happen compositionally to students, and maybe its players too, is just to let people play, just kind of encourage them just to write, just to play, and see what happens. Let them stumble or whatever, but just kind of, so that you’re aware and the student is aware of what little, I don’t know, germs of some potential thing might flower out of that.

To listen to the entire conversation with Maria Schneider, along with her music and the music that influenced her, or to hear interviews with other notable people inspired by jazz, go to Judy Carmichael’s Jazz Inspired web site.

Depending on how he looks at it, Kenny Garrett’s latest album, Sounds from the Ancestors, has been out for an eternity or an instant. Recorded … END_OF_DOCUMENT_TOKEN_TO_BE_REPLACED

As I delved ever deeper into the 14 albums that document the Larry Goldings/Peter Bernstein/Bill Stewart trio to prepare for our January Zoom conversation, what … END_OF_DOCUMENT_TOKEN_TO_BE_REPLACED

The musical avant-garde is an area where creative people who have earned wisdom through a lifetime of experience can flourish. Wadada Leo Smith, who last … END_OF_DOCUMENT_TOKEN_TO_BE_REPLACED

Wisconsin-born and proud: For all of the avant-everything complexity Ethan Iverson has applied to his solo projects or the sounds he created in his role … END_OF_DOCUMENT_TOKEN_TO_BE_REPLACED