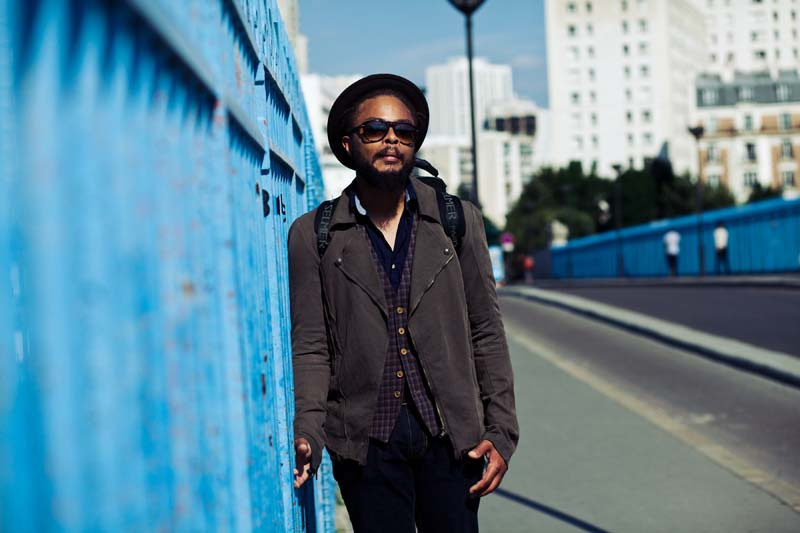 Shift, alto saxophonist Logan Richardson’s sterling third disc, is significant in several ways. It marks his first major-label recording, released on Blue Note. In addition to the superb rhythm section of bassist Harish Raghavan and drummer Nasheet Waits, the disc showcases the first collaboration between two iconic figures, guitarist Pat Metheny and keyboardist Jason Moran, both of whom greatly invigorate oblique, often suspenseful compositions like the R&B-leaning “Creeper,” the jagged-edged “In Your Next Life” and the transfixing ballad “Alone.” Shift also constitutes Richardson’s first disc since moving to Paris in 2011.

The 35-year-old Kansas City, Mo., native sees Shift as the summation of all his musical experiences, including his formative years in that historic jazz cradle, his journey to Berklee College of Music and then New York, his subsequent work with Greg Osby and Billy Hart, and the making of his two previous discs, Cerebral Flow (2007) and Ethos (2008). “This record closes that big chapter,” Richardson says over the phone from Paris. “Shift also closes out a certain sound in my music. A lot of the music that I’m composing now is different.”

When you composed the music, did you have Jason and Pat in mind specifically?

The body of work was written between 2009 and 2013. “Mind Free” was written completely for Pat and Jason-even in the most blatant way, because they are the two who start off the whole album. Harmonically I had Jason in mind. Then melodically, the whole thing is just Pat.

For all the rest of the music, everyone became chameleons; they just totally took form to the needs of the music. Pat was a scientist about it. He was constantly asking all these questions about the music. He brought like four or five different guitar sounds to the session but only used about two. I gave him and the rest of band descriptive sonic directions, like make it sound crunchy or dirty or sexy. That’s the only way I would describe certain sections or textures.

Given that Metheny was the elder of the ensemble, did he impart any wisdom to you in terms of being a bandleader?

With him, it was like all the other masters that I studied, such as Jay McShann, Clark Terry and Max Roach: So much wisdom was shown by example. Pat was the first person in the studio every day and the last person to leave, no matter how late it was at night. He never really came out of the booth, even when we took short breaks. To witness anyone of that caliber is insane. He showed complete care and respect for the music.

What did you learn from Moran in those sessions?

He’s been my mentor probably [since] before we even met in person. I started listening to Jason when he started playing with Greg Osby. I was about 19 then. I met him in Kansas City with Greg at the Blue Room. I was immediately into his playing then. When I started playing with Nasheet’s band, Equality, Jason was there. Then I got an offer to be in Jason’s Bandwagon big band. So he’s been my tutor and surrogate big brother for many years. He has transformed the way I conceive and play music.

For me, New York reigns supreme over any other place in regards to the level of artistry that’s possible. New York City just has this extremely high bar and a large amount of people able to do acrobatic things on top and across that bar.

In Paris, jazz is more a part of the general culture. Jazz is not such a foreign thing. When someone asks, “What do you do professionally?” and you say, “I’m a professional pianist,” it’s taken very seriously. Being any type of artist in France is extremely nurturing. The government looks at that as being a profession instead of a professional hobby, and the government financially supports that and the creation of that.

[In New York,] some people only get to experience the hunger side of being an artist. In Paris, you get to experience major support. The flipside is that you can have that hunger taken out of your art when you’re constantly being supported. It’s sort of a catch-22.

So now that you live in Paris and receive more substantial financial support, what does your music hunger for?

As with every other moment in my development, it’s to continue my understanding of my identity. I want to use all the tools and resources that I’ve gained to not only help broaden whatever musical expression I make but also to look at myself through a microscope. There’s a certain sound that I haven’t gotten to yet but one that I know I potentially can do. I just need more time. I’m pretty hungry for that. I’m really aiming for my next project to be closer to that sound.

Depending on how he looks at it, Kenny Garrett’s latest album, Sounds from the Ancestors, has been out for an eternity or an instant. Recorded … END_OF_DOCUMENT_TOKEN_TO_BE_REPLACED

As I delved ever deeper into the 14 albums that document the Larry Goldings/Peter Bernstein/Bill Stewart trio to prepare for our January Zoom conversation, what … END_OF_DOCUMENT_TOKEN_TO_BE_REPLACED

The musical avant-garde is an area where creative people who have earned wisdom through a lifetime of experience can flourish. Wadada Leo Smith, who last … END_OF_DOCUMENT_TOKEN_TO_BE_REPLACED

Wisconsin-born and proud: For all of the avant-everything complexity Ethan Iverson has applied to his solo projects or the sounds he created in his role … END_OF_DOCUMENT_TOKEN_TO_BE_REPLACED