Skip to content
Become a member and get exclusive access to articles, live sessions and more!
Start Your Free Trial
Home > Features > Kamasi Washington: An Opinion of Difference 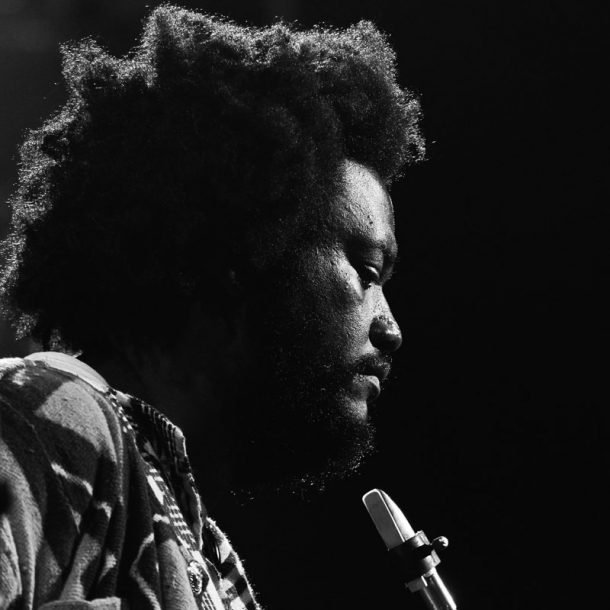 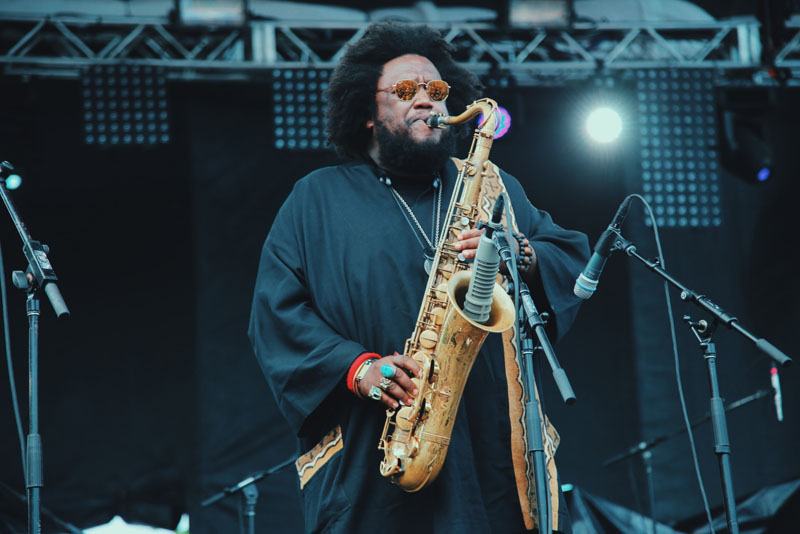 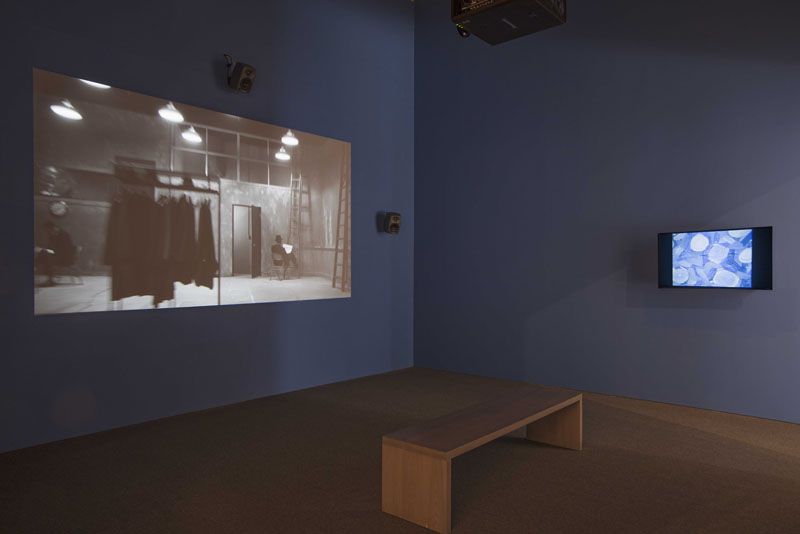 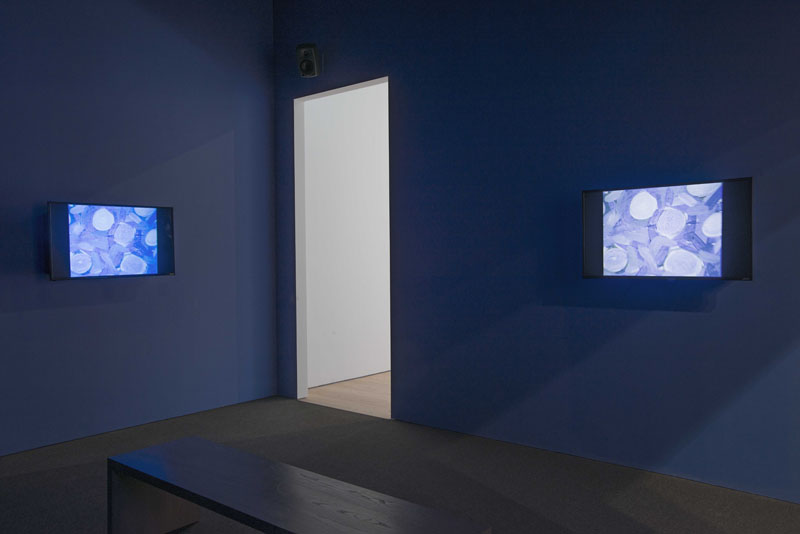 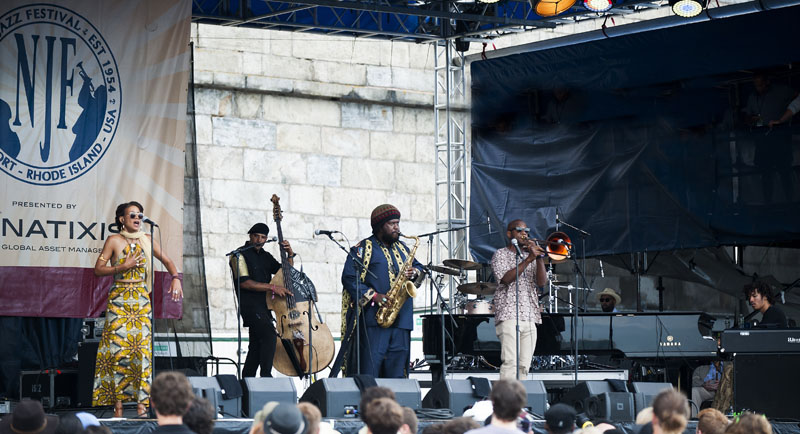 “They learned from me and I’ve learned from them,” Washington says of his bandmates. “It’s joyful.” Patrice Quinn, Miles Mosley, the saxophonist and Ryan Porter (from left) on the main stage at last year’s Newport Jazz Festival (photo by Marek Lazarski) 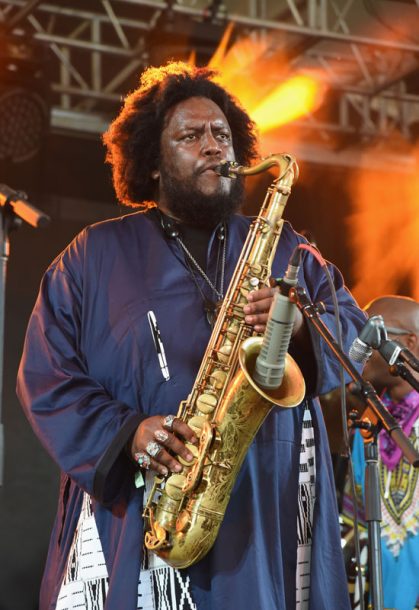 “Some of our most fun and amazing shows have been at places where we were definitely the only jazz artists on the bill,” says Washington, seen here at last year’s Bonnaroo festival. “But it was a challenge.” (photo by Filmagic)

In the Whitney Museum of American Art’s 2017 Biennial show, on view in New York through June 11, there is a small blue room. Inside are three small screens and one large one. Five short jazz tracks play—tantalizing anecdotes that touch on everything from postbop to Brazilian music—while the screens show video of paintings. The romantic piece “Knowledge” is accompanied by red and green squares with letters in them; the warm “Desire” is accented by what look like yellow chain-links. A sixth song, the lengthy “Truth,” is matched with a painting and a short film directed by AG Rojas. While strong but sentimental jazz takes hold of the room, and themes heard in the earlier pieces return, museumgoers view scenes of a person with lit candles in their mouth; a mother and son cuddling; palm trees in the night; and two boys practicing wrestling moves while surrounded by flowers. The room fills up during those 13 and a half minutes, and achieves full emotional tilt. Collectively, the music and videos make up a project called Harmony of Difference, by the tenor saxophonist and composer Kamasi Washington.

Fans were likely not expecting Washington to succeed 2015’s The Epic with a museum installation. But it makes sense. That celebrated triple-album made room for the L.A.-born artist atop the jazz heap, as well as at festivals like Bonnaroo and Coachella and in outlets like Rolling Stone and Pitchfork. Hearing Washington in a museum, or anywhere other than a jazz club, sounds about right. (It also helped that the saxophonist’s name was attached to both an important electronic/hip-hop label and rapper. The Epic was issued by the L.A.-based indie Brainfeeder, and Washington appeared on Kendrick Lamar’s landmark 2015 LP To Pimp a Butterfly. And he had a hand in “LUST.,” a track off Lamar’s latest album, DAMN.)

Five decades ago, John McLaughlin sensed something monumental was coming in music. “I knew things were going to change,” he said. “All the musicians felt … END_OF_DOCUMENT_TOKEN_TO_BE_REPLACED

Since her early days during the folk revival of the 1960s, Maria Muldaur has been immersed in American roots music of the past—the often quite … END_OF_DOCUMENT_TOKEN_TO_BE_REPLACED

This rare interview with pianist Hans Groiner was recorded on April 8, 2021. JazzTimes: Do you follow the latest trends in jazz? What have you … END_OF_DOCUMENT_TOKEN_TO_BE_REPLACED

The rock world takes a lot of credit for what’s known as the “indie ethos,” or “DIY.” Circumventing the corporate music industry with small labels … END_OF_DOCUMENT_TOKEN_TO_BE_REPLACED