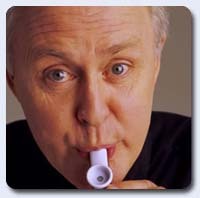 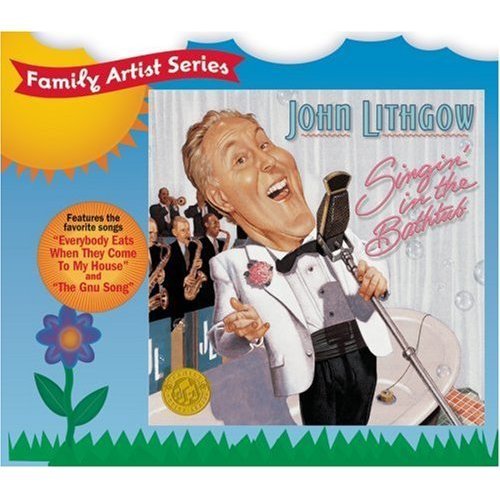 Singing in the Bathtub by John Lithgow 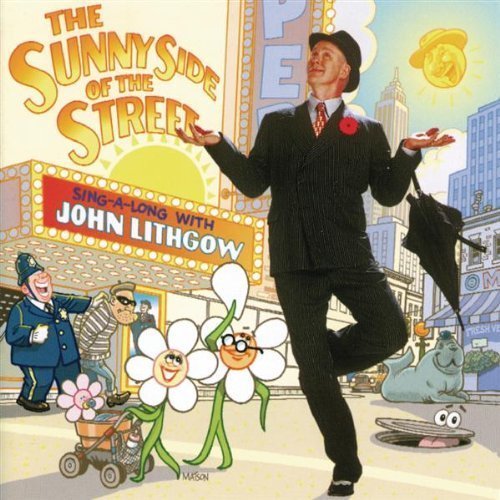 John Lithgow's On the Sunny Side of the Street

Actor John Lithgow’s career is wide and varied, and has been honored with multiple Emmy and Tony Awards, and two Oscar Nominations. Perhaps best know for his role as Dr. Dick Soloman on Third Rock From the Sun, John has also done everything from Shakespeare to jazz inspired performances for children.

John feels fortunate to have grown up in a family of great story tellers and honored them in his most recent production, Stories By Heart at Lincoln Center in New York City, where he explores creativity and the evolution of storytelling, and how both connect us to ourselves, and to those around us. I met with John during the run of this show in 2008.

What follows is an excerpt from our conversation that was aired on my Judy Carmichael’s Jazz Inspired radio show in 2008.

An ability to improvise must be a great advantage to an actor.

For me and most of the work situations I’ve been in, it’s been a very good tool toward actual performance. Everybody always asks me, “Did you improvise on Third Rock From the Sun?” Of course not. It was highly scripted and completely calculated by the time we performed it for the studio audience. But the process itself was lunacy. Getting there was very improvisational, but the writers were always there and using whatever happened at the time. Besides which, in the case of Third Rock, you’re capturing lightning in a bottle. It’s that night. The entire show is performed in one night and whatever happened that night, that was it. So you had to be sure you were ready.

Don’t you think that just the fact that you can improvise allows you to come from a different place when you’re doing something like that?

It requires a lot of courage. This show I’m doing concurrently, which you’ve seen, Stories By Heart, I’ve thrown in things which are deliberately wide-open, interactions with the audience where anything can happen and I ask them questions. People either answer or they don’t. Or they surprise me with their answer. I almost do that to throw myself off rhythm. But it takes a lot of courage to do that and a lot of familiarity with what you’re doing.

In lots of plays there will be a moment when it seems like the actor or character is saying something to the audience, but the last thing you want to happen is to have the audience answer back. But you really go back and forth with that. That’s very difficult to straddle.

This is a slightly unusual thing for me. Comedy itself is improvisatory to the extent that you’re timing everything. Anything could happen. Somebody could sneeze in the middle of the essential syllable and an entire huge gag goes completely down the drain. Or, if you see a great comedy on two consecutive nights, you’ll see different nuances in the timing. That’s the fun of it – playing off an audience.

Unquestionably there are the great nights and the not-so-great nights. It’s so chemical. I never know exactly. It’s so interesting to me that there are some nights when I’m just drooping. It’s always happened. In every show I’ve ever done, there are nights where you think, “I can’t do it tonight.” By some mystery, it will go fantastically well and you’ll wonder, “Where did that come from?” M Butterfly which I did on Broadway was an incredibly draining role, where I was onstage the entire time. There would be two-show days and it’s Saturday night and I’ve just done it three times in the last 36 hours. And I would sit onstage waiting for the curtain to go up and think “I can’t do it, I just can’t do it.” And then two and a half hours later, I’ll be bowing in front of an audience, and thinking, “I never did it better.” Who could explain that?

Talk about Sunny Side of the Street, because this is so much fun and also for children. I think it’s great that you’re doing this, your interest in bringing children into this whole musical scene.

It started a long time ago. I’ve been entertaining kids. I had a sister ten years younger than I, so I would say that it started when I was about thirteen and she was three. Then I had my own kids and entertained their classrooms and assemblies.

Oh yea, that’s where it all began. When Third Rock came along, you star in a hit series and, man, whatever you want to try, somebody will say yes. You have to be very cautious about what you want to try. Somebody approached me about doing a video of my concert for kids and I did that. And from the video came an offer from Sony to make an album and that was my first, called Singing in the Bathtub.

The idea was to go back and amass all the songs that I loved as a kid. There was always music in the household. My parents were always jazz fans and also fans of great novelty performers like Danny Kaye, Fats Waller, Cab Calloway, Flanders and Swan from England, Allan Sherman and his joke songs. So I went and collected a whole bunch of them. Sony put on a very good record producer, Jai Winding, son of great jazz trombonist Kai Winding. Jai listened to all these songs and we collected a few more. He had the idea of having a jazz orchestra to back up about five or six of them, like the Calloway song and the Shirley Temple song, “The Codfish Ball.” He got this wonderful jazz arranger and jazz orchestra conductor, Bill Elliott, to put together arrangements for these five. There were another six or seven songs, but we had a little “Anarchy Band” we called it to back them up. With this jazz orchestra, we have these wonderful big band arrangements for “Everybody Eats When They Come to My House,” “The Codfish Ball,” “Hey, You’re Adorable,” Would You Like to Swing on a Star?” All of those. The album came out simply wonderfully.

And I thought this would be a great orchestra concert for kids. So I literally called information in New York City and I asked for Carnegie Hall. I figured, let’s start at the top of the food chain. And like I said, I was starring in a sitcom and someone said yes. Six months later, there I was on the stage of Carnegie Hall with a big orchestra, singing these great songs for kids. It was a dream come true. It was jazz fantasy camp for me, because I’m not an accomplished musician. I play mediocre guitar and that’s it. I’m not an accomplished singer either. The only people I had the nerve to perform for were undiscriminating little children. They’re undiscriminating, but they’re very demanding as an audience.

I was going to say, it’s not that easy.

I had spent all those years entertaining kids with just a guitar, so I’m very good at it. I had 2,500 kids in the palm of my hand at Carnegie Hall and I realized, I am great at this. That was my first album, and I’ve made two since then. You began by asking about Sunny Side of the Street, which is my more recent one. In this case, I had this deal with Razor & Tie to create an album for kids and they urged me to consider this wonderful guy named J.C. Hopkins to do the musical direction on that. J.C. and I met. He completely got the idea. It was more or less the same concept as Sunny Side, but we began to work harder on finding great old long-lost novelty songs. I talked to all my music theater pals. I basically made it my habit there for awhile to ask everybody what nutty songs you remember from when you were kids. And everybody had at least one.

They’re so great. J.C. brought a lot to the table. He found these two great Betty Boop songs – “Be Human” and “You’ve Gotta Have Pep” which became kind of our hit single. What we did is we would take these songs and reimagine them for kids. Almost all of them were Hit Parade songs of the ’30s and ’40s when they used to sing novelty songs for adult consumption. I would slightly rejigger them. I would take liberties with Dorothy Fields. I’ll give you the best example. [sings softly a cappella] “Backpack pencil case/Lunchbox all in place/Brand new sneakers and clothing…All dressed up for First Grade/Way too shy and afraid…Mom on bended knee/Right in front of me/Looked right into my eyes/All my worry blew away/When she taught me how to say…” And you know what comes next. [“The Sunny Side of the Street”]

[continues to sing] “Grab your coat and get your hat/Leave your worry on the doorstep…” And away we go. There’s another great Dorothy Fields song called “Baby,” which is not a kids song at all. It was from an all-black revue from the ’20s: The Blackbirds of 1927. And it was a raunchy song. I heard it on the scratchy soundtrack of a documentary film and thought, “That’s a great song for kids!” Until I saw the music, which were strictly raunchy, bawdy, sexy lyrics. I swept them all aside and turned it into a conversation between a Mommy and a baby, where the baby actually speaks his thoughts. “I think my bottom’s dry, I’m gonna cry.” Just nudge it toward children. They all work beautifully.

To listen to the entire conversation with John Lithgow, along with his music for children and the music that influenced him, or to hear interviews with other notable people inspired by jazz, go to Judy Carmichael’s Jazz Inspired web site. Originally Published June 29, 2010

Depending on how he looks at it, Kenny Garrett’s latest album, Sounds from the Ancestors, has been out for an eternity or an instant. Recorded … END_OF_DOCUMENT_TOKEN_TO_BE_REPLACED

As I delved ever deeper into the 14 albums that document the Larry Goldings/Peter Bernstein/Bill Stewart trio to prepare for our January Zoom conversation, what … END_OF_DOCUMENT_TOKEN_TO_BE_REPLACED

The musical avant-garde is an area where creative people who have earned wisdom through a lifetime of experience can flourish. Wadada Leo Smith, who last … END_OF_DOCUMENT_TOKEN_TO_BE_REPLACED

Wisconsin-born and proud: For all of the avant-everything complexity Ethan Iverson has applied to his solo projects or the sounds he created in his role … END_OF_DOCUMENT_TOKEN_TO_BE_REPLACED