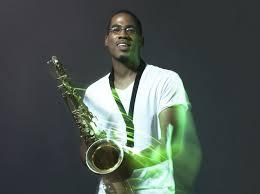 When tenor saxophonist James Brandon Lewis decided to recontextualize ’90s hip-hop in a free-jazz-leaning saxophone/electric bass/drums setting, he wanted the results to sound organic and honest. “I didn’t want to over-synthesize the music and have a bunch of backbeats and bebop vocabulary,” he says. “My biggest challenge with this record is to not be the jazz musician who has the backbeats while giving love to hip-hop.”

The finished product, entitled Days of FreeMan, is Lewis’ second release for the Sony-owned OKeh imprint. The 33-year-old Buffalo, N.Y. native talked about his journey to the golden age of hip-hop while explaining his methods of refracting that urgent sound into his own musical language.

What inspired you to make the thematic leap from spirituals on your 2014 disc, Divine travels, to hip-hop on Days of FreeMan?

It’s all a continuum. It’s all music coming from the African-American tradition, whether we’re talking about spirituals or work songs or hip-hop. It all really speaks to what was happening in our environment when it was created. In a sense, all the music involved “having a voice.”

Talk a bit about the title. From a cursory glance, it seems related to the Black Lives Matter movement.

I grew up on Freeman Street in Buffalo. But, of course, when coming up with a title, not only was I thinking about a street, I was thinking about all the other types of conversations that the title could spark. I also have a song on the disc called “Wilson.” Wilson, N.Y., is a place my parents used to take me as a kid to go fishing. But, of course, [using “Freeman” and “Wilson” today], I could also be talking about Darren Wilson [the police officer who shot and killed Michael Brown in Ferguson, Mo.].

I’m not the type of person to be in your face about discussing what’s going on in society. But I’m definitely conscious of it. I don’t exist in a place of creating art that’s separate from everyday living. Whether I want to be political or not, the world lets me know who and what I am as soon as I step out the door.

Other than childhood memory, did you dig deeper into ’90s hip-hop to give your music historical weight?

Yes. I scoured YouTube for hours, watching different documentaries like Freestyle: The Art of Rhyme, where I discovered people like [freestyle rapper and album guest] Supernatural and learned how he prepared his rap improvisations by studying the dictionary. Then I checked out KRS-One’s 40 Years of Hip-Hop, Scratch and The Art of 16 Bars. I also checked out a lot of [jazz-oriented] albums that proceeded me in doing this type of approach-stuff like Russell Gunn’s Ethnomusicology, Don Byron’s Nu Blaxploitation and Branford Marsalis’ Buckshot LeFonque.

Not only was I watching a lot of hip-hop documentaries, I listened to rappers like Common, Talib Kweli and Mos Def [now Yasiin Bey]. When listening to a lot of those classic ’90s hip-hop albums, you’ll discover that there were a lot of interludes-at least on albums by A Tribe Called Quest, Leaders of the New School and Lauryn Hill. So that inspired me to have that layered conversation with my grandmother on the disc.

How does hip-hop inform your improvisations and melodies?

When checking out the rappers, I started listening to all of their cadences. In my rehearsal sessions, I start out verbalizing my saxophone lines. So when I picked up my sax, I had the cadences inside of me to make it easier. No matter what notes I chose, I had that rhythmic flow. I know it’s a lot to ask from listeners to just isolate the rhythms on the disc, but if you listen to them closely, you’ll notice that they are all hip-hop rhythms, even in the saxophone solos. They all have a speech-like lyricism to them.

Talk about working with bassist Jamaaladeen Tacuma and drummer Rudy Royston on the disc.

I needed people who could play all genres. Rudy has played just about every kind of music; the same thing can be said about Jamaaladeen. Knowing all [the musicians] they played with collectively, by the time we got to recording “Lament for JLew,” when I said, “I need a rock joint on this record,” or “Bird of Folk Cries,” and we need that gospel shout-music feel, there weren’t any problems going there. They did an amazing job.

It was cool to have open dialogue with them about things I was trying to do on the record. And it was challenge for me to keep up with these two monsters of musicians. They brought my music to life. They made the sheet music feel real.

Depending on how he looks at it, Kenny Garrett’s latest album, Sounds from the Ancestors, has been out for an eternity or an instant. Recorded … END_OF_DOCUMENT_TOKEN_TO_BE_REPLACED

As I delved ever deeper into the 14 albums that document the Larry Goldings/Peter Bernstein/Bill Stewart trio to prepare for our January Zoom conversation, what … END_OF_DOCUMENT_TOKEN_TO_BE_REPLACED

The musical avant-garde is an area where creative people who have earned wisdom through a lifetime of experience can flourish. Wadada Leo Smith, who last … END_OF_DOCUMENT_TOKEN_TO_BE_REPLACED

Wisconsin-born and proud: For all of the avant-everything complexity Ethan Iverson has applied to his solo projects or the sounds he created in his role … END_OF_DOCUMENT_TOKEN_TO_BE_REPLACED