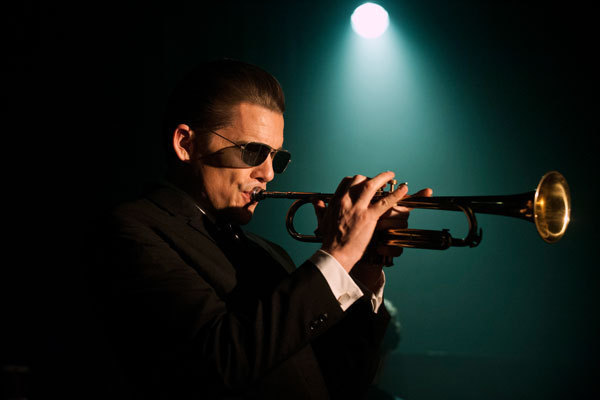 Ethan Hawke as Chet Baker in "Born to Be Blue"

Born to Be Blue, writer-director Robert Budreau’s superb pseudo-biopic on mid-career Chet Baker, has quietly become a critical hit, and for good reason. Bucking the rote chronology and reenactments that plague the biopic genre, the film both dramatizes reality and invents history to make larger points about Baker’s music, his addiction and his deep existential wounds-and about how profoundly and problematically intertwined they were. At the core of the film’s success is Ethan Hawke’s performance as Baker, a terrifically natural and understated take on a jazz anti-hero who continues to personify tragic romance, and the result of diligent research into the trumpeter as well as contemporaries like Art Pepper and Hampton Hawes. JT editor Evan Haga recently chatted with Hawke by phone. Here are some highlights.

Haga: As a jazz fan watching this film, I immediately began doing that jazz-nerd thing of trying to check facts. But from the get-go it’s obvious liberties are being taken. After the film, and especially after it’d seeped into my memory a bit, I appreciated those liberties. I think they allowed you and Budreau to get to the core of Baker’s myth.

Hawke: You’re taking words right out of our mouths. That was the idea; the idea was to explore the myth-the legend of Chet Baker. This is what [Robert] would say-and I really love this-he would [say the film’s strategy is similar to] the way jazz musicians will take a classic like “Summertime,” or any [standard], and riff on it. And in a lot of ways what we’re doing is taking the legend of Chet Baker and we’re riffing on it. We’re improvising on, “Oh, I heard he pumped gas; oh, I heard someone saw him on Sunset playing for quarters; you know he lost his teeth; you know he once almost starred in a movie about his own life.” We tried to use this legend to find the spirit of the guy. That’s what you’re talking about, right?

Yes. I think I wrote in my notebook that the film wasn’t true but it felt poetically true.

I’ve heard you talk about a Baker biopic that you began working on with [writer-director] Richard Linklater. What happened with that?

Years ago, before I was 30, Linklater and I started talking about this idea of a jazz movie centered on Chet Baker in the ’50s. We had this idea to make a movie inspired by [Robert Frank and Alfred Leslie’s] Pull My Daisy, that beat movie, and really to try and make a jazz film. And we had an awesome script by Stephen Belber, and we worked really hard to raise some money. [We] tried to make it a couple different times over the years, until finally I got too old for that script and that period [of Baker’s life].

So I left it behind, with some real sadness. I read a lot about Chet, obsessively listened to him, and really thought that I had this movie in my heart I wanted to make about him. So then this script showed up and here was Chet in his 40s, in this kind of lost haze of those years in the late ’60s. I really loved, right off the bat in the script, this idea of the movie-within-the-movie. The fact that I was being asked to play Chet Baker playing himself was very interesting. Anybody who knows anything about Chet Baker knows that didn’t happen. You’re immediately tipping your hand to the audience, [conveying] that we’re leaving the truth here, and we’re showing you that every biopic you’ve ever seen is kind of a lie. We’re going to admit it’s a lie, and now we’re going to play and try to tell a story that might get at something more true than any series of facts could be.

I liked how Robert over-styled the beginning of the film. It was like every Herman Leonard-, William Claxton-derived cliché was being used, to the point where I thought, “Oh, no-is the whole movie going to be like this?” And then he pulls the rug out from under you.

And Chet himself says [in the film], “This is so fake, man. I was 21 when I first shot up. I’m too old.” When I was reading that, that’s when I decided I wanted to make the movie. Because I thought that was such an original idea.

So it was important for the film to make the point that there are so many pitfalls, so many traps you can encounter when trying to make a “jazz” film. That idea was on Robert’s mind and on your mind?

Oh, definitely. If you love jazz, the last thing you want to do is make a terrible jazz film; it’d be so depressing. … The best biopics aren’t interesting because of the man, they’re interesting because of the story. Like Raging Bull-it’s a great film. You don’t have to care about boxing; you don’t have to know who Jake LaMotta is. Capote is a very interesting film whether you know anything about the writer or not. It’s taking a very interesting personality and hoping it speaks to a larger audience. And in Raging Bull, for example, you’re using fighting as a metaphor for life, and in this film the music becomes the metaphor.

I want to talk about your performance. You were able to capture an essence without resorting to caricature, or doing an impersonation-another consistent danger of the biopic thing.

It was a real dance for me. You want to honor the iconography so that it lets people relax and get into it, and I didn’t want to do an impersonation. I don’t find that interesting. My goal as an actor has always been to try to blur the line between character and self, try to make acting as effortless as possible, and try to make it emotional and as rooted in the story as possible. The more you get into imitation, the less success you have. I wanted to put something personal to me in the movie, the same way I would with any character.

If you really want to watch footage of Chet Baker, you can. We live in a great time: I could Google him right now and watch a performance in Norway in 1983 and enjoy the hell out of it. So the point is, it’s got to be bigger than that, and yet, at the same time, if I disrespect the iconography it won’t feel right.

What about your musical training for the film?

Well, that’s really tough. I had a vocal teacher and a trumpet teacher, and I had about four months to get ready, and I wanted a lot more time. But my trumpet teacher said I could have eight years and I still wouldn’t be ready.

So I took heart from that and I [focused on learning] about eight songs. … Some of the periods when he’s learning to play again, when he’s not supposed to sound like Chet Baker yet, you can hear me playing. We had some wonderful Canadian musicians that Robert brought in, and they were fantastic.

The singing was its own work. I didn’t anticipate the singing to be as hard as it was. One jazz critic said that Chet Baker isn’t really a singer, he’s the memory of someone singing. And I loved that, and there’s something so hollow and longing and melancholy in his singing. It’s not necessarily his voice that makes it good; you feel like he might die in every vocal performance. … It’s magical, but I also thought it was act-able, like I don’t have to sing that, I could act it. As I studied his singing, I came to respect it a lot. It’s very difficult to be that effortless. It doesn’t have any lies in it, his singing.

He always had a weak embouchure. Even before he got beat up, he was missing a tooth. He never had a lot of faith in his embouchure, so he liked to sing to give his mouth a rest. He really sings exactly like he plays-he just sings the notes. There’s almost no emotional connection to the words; it’s just a direct relationship to the notes. And it makes for a really original sound that’s very hard to do. It was different than I thought. It’s almost not act-able. It’s very musical.

Your chemistry with costar Carmen Ejogo was striking, quietly intense, and a lot of this film consists of scenes where it’s just the two of you interacting. I couldn’t help but think of the Linklater films you did with Julie Delpy, Before Sunrise, Before Sunset and Before Midnight. Did your experience in those movies inform this one?

Of course. I learned a lot through those movies about how to try to put male/female intimacy onscreen. And it’s not about kissing, or any of the superficial things. It’s about trying to get a connection, trying to put it on film. Those movies have formed me as a performer.

There’s a certain aspect of jazz to all the Linklater films, because they’re rooted in a real architecture but have a tremendous amount of freedom inside them. You take something like Boyhood, which is basically a graph: Let’s take 12 years, first through twelfth grade, but inside that ridiculously, absurdly simplistic architecture, I can do whatever I want, and we can tell any story we want. And it’s kind of like [a jazz musician approaching] “Summertime”: Here’s this song you’ve heard a million times. In this structure, if I hit these beats, we’re safe; but I [can also] play around however I want, and feel what I want to feel. And the audience still has a security.

Do you consider yourself a jazz fan?

I’ve never been as deep in my knowledge as I’ve wanted to be. … I love Chet Baker, I love Nina Simone, I love Miles Davis. I knew a few contemporary artists. I’ve always really liked Brad Mehldau; I always thought he was brilliant. I knew a few other people.

As I was reading these books on Chet, I tried to understand his influences and read about Bix and Harry James, and really understand, like, who is Charlie Parker and why is what he’s doing so special? Why does Chet talk about him like he’s a god? So I started listening more and more. … I went down the rabbit hole with it. I thought I loved [jazz] before the movie, but now I love it even more. Originally Published April 4, 2016

Depending on how he looks at it, Kenny Garrett’s latest album, Sounds from the Ancestors, has been out for an eternity or an instant. Recorded … END_OF_DOCUMENT_TOKEN_TO_BE_REPLACED

As I delved ever deeper into the 14 albums that document the Larry Goldings/Peter Bernstein/Bill Stewart trio to prepare for our January Zoom conversation, what … END_OF_DOCUMENT_TOKEN_TO_BE_REPLACED

The musical avant-garde is an area where creative people who have earned wisdom through a lifetime of experience can flourish. Wadada Leo Smith, who last … END_OF_DOCUMENT_TOKEN_TO_BE_REPLACED

Wisconsin-born and proud: For all of the avant-everything complexity Ethan Iverson has applied to his solo projects or the sounds he created in his role … END_OF_DOCUMENT_TOKEN_TO_BE_REPLACED