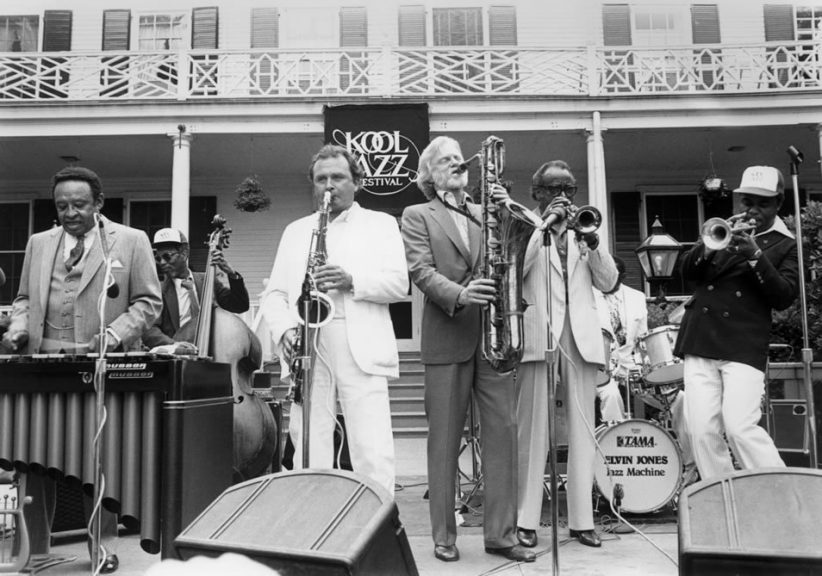 Bob Watt, writer and French horn player with the Los Angeles Philharmonic, interviewed the legendary “Harry ‘Sweets’ Edison at his home in Los Angeles in July 1997.

Bob Watt [looking at photos on living room wall]: From which universities are you receiving degrees in these photos?

Harry “Sweets” Edison: That one is from Harvard…got another one from Yale…that’s the last picture of Billie Holiday.

Yeah, Dizzy and me …

Is that you and Frank [Sinatra] on stage there?

Yeah…yea, that’s when he retired.

I see you’re wearing an afro.

Yeah…yeah, that was in line then, [in style,hip] couldn’t get no action [attention from women] then without an afro.

Well, I was born in Kentucky, my mother and father separated when I was six months old. After that my mother moved to Columbus, Ohio…so that’s home to me, Columbus, Ohio. I went back to Kentucky when I was five…on the farm and my uncle, who wasn’t really a musician…cause’ he never had any lessons or formal training but, he just liked music and he could read a little bit, ya know, so he taught me whatever he knew.

The same with me, I never took any formal lessons from a teacher who would show me the finer points of playing. Which I wish I had the opportunity to do because, bad habits are hard to break. There’s a right and wrong way but…I just got the results that I wanted and I just kept on playing the way that I wanted to play.

So Louie Armstrong was also self-taught?

Did Louie Armstrong get formal training later in life?

No, no, never, but he had everything to work with and he could read music…he was a very good reader.

Where did he learn to read music?

Well, just like me, he learned how to read in high school and after listening to Louie, I wanted to learn how to play the trumpet like he did. I went to school in Ohio where I joined the school band. But, it didn’t thrill me at all. I wanted to play jazz. I wanted to take a solo.

So, you didn’t like the music in the school band?

No, no, John Philip Sousa and all that stuff? No…

Was this how you learned to read music though?

Oh yea, but then I liked sports so I played in the band so I could see the basketball and football games. I even went out for football at one time. I got hit real hard once and I took my ass right back to the band.

I played with a band around Columbus, Ohio. The leader was Earl Hood, he had a band and the first saxophone player was living next door to my mom and he heard me practicing one day and asked me if I wanted to join Earl Hood’s band? So, first thing my mother asked was, “Is he going to make any money?” My mother was always looking out for me. She was a mother and a father to me and supported me all her life until I left home.

So when I did leave home it was with a band called Morrison’s Grenadeers out of Columbus, Ohio. I later went to Cleveland, Ohio on a job and my mother came and got me, because, I got hungry. The job ran out so I wrote my mother to send me some money to eat on. She ended up coming to Cleveland to take me back home.

So another band came through Columbus, which was a good job and we went to Cleveland. It was called Jeter Pillars. They [James Jeter and Hayes Pillars] were members of the great Alphonso Trent band out of Arkansas. He had a fantastic band one of the territorial bands. Of course in those days there was nothing but big bands. Most bands had 12 to 14 players.

When you say territorial bands what do you mean exactly?

Territorial bands were named that because of the travel they did. They traveled everywhere, the South, Southwest, everywhere. But they never went up North because then they would run into bands like: McKinney’s Cotton Pickers, Duke Ellington, Chick Webb, the bigger bands.

Did the black bands ever stay in hotels?

Aw, man no! A hotel? We didn’t know what a hotel was. There was no hotel you could stay in. In fact, the reason black bands had to travel so much was because there was no place for them to play except dance halls. There was no place on a permanent basis for the black bands to play. The hotels were all occupied by the big white bands: Glenn Miller, Tommy Dorsey, Benny Goodman…all the big white bands, they had all the jobs. They had all the staff band jobs on radio. That’s another reason why most black musicians became such innovators…originators, soloists, because after you learned how to play the scales, the only thing you could look forward to was going on the road with some band. You couldn’t study your instrument and expect to join a symphony orchestra or join a radio staff band. That was a no, no. So, black musicians had to play solos to make a living. The first thing you had to do was go into a night club, there was no music, you just played for the singers and then you would play what you wanted to play, you see.

There were some great trumpet players in those days that were capable of playing in symphony orchestras. Like, ah, this one trumpet player, who played with the Basie Band… his name was Wendell Culley. He was the most brilliant student that Schlossburg had from Boston. Wendell was from Boston and his ambition was to play in the Boston Symphony. He was capable but he couldn’t get an audition. There was a trumpet player with the Fletcher Henderson band named Russell Smith. He was the most brilliant student that, Vincent Bach, the trumpet maker had. He could do anything on the horn that Dell Stieger, or any of those trumpet players who wrote books could do, they were what you called the elite of the black trumpet players.”

So they could read anything?

…Read anything…you know but, they couldn’t get a job in any white band so, they ended up on the road with Fletcher Henderson and Noble Sissle, you know? So what was the need of studying your horn to the point that you were just so articulate on it, that you…that nothing was too hard for you to play. Those guys could just ‘read around the corner’ and they were certainly capable of being soloists with symphony orchestras, but they couldn’t get even close to an audition. So they ended up just like me… I never had a lesson, but I was with Basie all my life. So, there was no other place but these bands for black musicians to play even though they knew their instruments like these two trumpet players.

And that was the late Thirties?

The late Thirties, yeah…all through the Thirties …you had to really want to be a musician to play your horn in those days because the only thing you could live for was to be on the bus everyday with the big bands.

You didn’t travel by public transportation?

Oh no, we had a bus…an old bus. Basie rented a bus, but it was like the yellow school buses with the motor in front, not like the Greyhounds of today. These were old-time buses–our knees and legs were sore half the time because the seats were so close together, you know. The isles were so narrow. Jimmy Rushing had to walk down the isle sideways the isles were so small. Jimmy was fat, you know, Mr. Five by Five, we called him.

You did very long bus trips didn’t you?

Oh man! We’d do like 250 one-nighters a year…260…270 one-nighters a year. The only relief we had when we came off the road was to play in the Savoy for maybe two weeks or if we were playing Theaters we’d go in the Apollo for a week, on 125th street in Harlem. From there to Philadelphia, then to Baltimore, at the Royal Theater, next to Washington D.C. at the Howard theater and from Washington, your next stop was Virginia and then all through the Blue Ridge mountains.
Who drove the bus, did you have a driver?

Oh yea, we had a driver. Basie rented a bus from a company called Charlie Lerf, which was in New Jersey. They furnished a driver.

A white driver, yeah…well, there were no black bus drivers in those days. So we drove all through the South, Mississippi, Texas, we’d stay gone for about nine months. Coming back to New York, we’d play the Regal Theater and then Chicago for a week. Then we’d start playing one-nighters in Indiana, Ohio, and then back to New York. Then we were off for 3 or 4 days, enough to sleep in your own bed for a few nights, and soon you’d get a call, and you were back on the road again.

In those days we were only making $9.00 a night. I think Basie was making $15.00, but in those days, that was good money you know. I was only paying $8.50 per week for a furnished apartment in New York. Most of the time we stayed in the Woodside, you know the song, “Jumpin’ at the Woodside.” The rooms there were $1.50 a day…I think Basie was paying $5.00 a week for a suite. Yea, the Woodside 147th and 7th Avenue, a black owned hotel.

But I tell you, I wouldn’t trade those days for anything, because Basie had such a band…you looked forward to just being together and playing. We didn’t even get tired on those 271 one-nighters. Sometimes you had to sleep all day in the bus, change on the bus and then go right on the bandstand. The white bus driver had to go to the market and get us sandwiches, because as black men, we couldn’t go into the grocery stores or restaurants.

You couldn’t go into the grocery stores either?

No! We had to go around the back of the grocery store if we wanted something. We lived through that kind of thing daily.

So when we did stay in hotels, they were more like rooming houses. Black people who owned these rooming houses were set up for the black big bands, because they came through on a regular basis. Some people set up their houses for the bands. They would provide three meals a day for a $1 per day, you know…or ‘pitch til’ you win,’ where they would lay all the food out on a table and you could eat all you wanted. Most of the black people in the South, who owned those homes and rooming houses were mostly doctors and lawyers, you know.

This rare interview with pianist Hans Groiner was recorded on April 8, 2021. JazzTimes: Do you follow the latest trends in jazz? What have you … END_OF_DOCUMENT_TOKEN_TO_BE_REPLACED

The rock world takes a lot of credit for what’s known as the “indie ethos,” or “DIY.” Circumventing the corporate music industry with small labels … END_OF_DOCUMENT_TOKEN_TO_BE_REPLACED

Because I’ve been a Pat Metheny fan for decades (who hasn’t?), it came as a wonderful surprise to be asked to interview him for his … END_OF_DOCUMENT_TOKEN_TO_BE_REPLACED