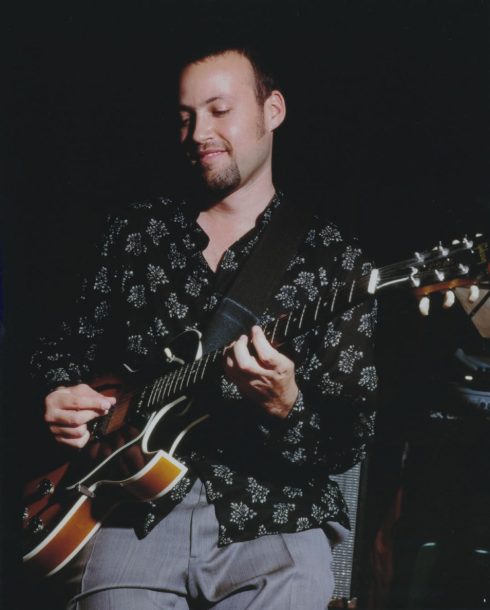 The jazz intelligentsia was out in full force on Sept. 17 at New York City’s Cornelia Street Café. The occasion was guitarist Liberty Ellman’s release show for Radiate (Pi), his fourth album as a leader but his first in nine years. In a compact first set, Ellman combined the cerebral and the visceral in a way that brought to mind a rarefied group of rhythmically savvy composer-musicians-namely Henry Threadgill, Butch Morris and Steve Coleman. The opener, “Supercell,” shook the basement club with its combination of polyphonic textures and interlocking parts. With the exception of tuba player José Davila, the album’s musicians were present, including saxophonist Steve Lehman, trumpeter Jonathan Finlayson, bassist Stephan Crump and drummer Damion Reid, all of whom were up to the task of making harmonic and polyrhythmic high theory seem conversational.

Despite the nearly decade-long gap, the 44-year-old guitarist has worked consistently. He has become known for his pivotal role as the chordal anchor of Henry Threadgill’s Zooid, but is also a member of the Joe Lovano Village Rhythms band, Myra Melford’s Snowy Egret quintet and Adam Rudolph’s Go: Organic Guitar Orchestra, and is as comfortable in acoustic settings as he is with electronics or behind the mixing console. After getting enmeshed in the Bay Area hip-hop scene, opening for Ice Cube and the Pharcyde with Midnight Voices, Ellman returned to his native New York in 1998, sharing a moving truck with longtime collaborator Vijay Iyer. We recently caught up with the guitarist at his apartment in Kensington, Brooklyn, to discuss the various compositional systems that informed the album, and the improvisational approach that defines one of the most innovative guitar voices of the contemporary avant-garde.

How did Butch Morris and his “Conduction” system influence your compositional perspective?

Butch was brilliant. His ears were just so strong and sensitive. He was so perceptive, and he developed his “Conduction” system to allow him to control any of the ensembles that he created, but the only reason that it truly worked is because his ears were so good. Butch could hear everything that was happening. He could keep it all going and never lose control. I had to learn to not look at my instrument, because when he wanted to change the instructions I needed to be ready. There was no worse feeling than when you were playing and you looked up and he was staring at you.

How does “Conduction” compare with Henry Threadgill’s intervallic system in Zooid?

That’s just really brilliant. It’s more like composing with the classical rules of counterpoint, but in this case he’s creating his own rules where the voice leading has to follow the intervallic structure. To move from one chord to another, you have to move by staying in that cluster of intervals, so there could be a minor second, a major second and a tritone. That could be one. So within that particular bar, using that system you would only move from one chord to the next using those intervals. You have to practice it, just like you were practicing scales or a diatonic piece of music, but once you get in there, the idea isn’t that you strictly just stay there, especially while there are sections with improvisation. That’s the real code of the music, and that’s where the real feel and sound are.

So there’s some indeterminacy.

He’s trusting you to do the right thing. You can’t abandon it, but you can embellish it. In the beginning, it was really hard. The very first time we got together, in the year 2000, he gave me the guitar part, and I didn’t know what I was looking at. It was like a chamber ensemble. I didn’t have the lead sheet, so I didn’t know how my part fit with the other musicians. But once I heard everything together in the first rehearsal, I got it. It was grooving so hard, but I still didn’t know how to play on it, because if I played any kind of jazz lick, it sounded really corny.

So the system safeguards against hackneyed licks.

It’s not necessarily on purpose, but Henry is very educated when it comes to contemporary classical techniques. So for him, it’s not so much that he’s telling you not to do something, unless he says “Don’t do that,” which is what he’ll say to any bass player who starts walking. “Don’t walk. Dance. Play the music.” It took time for me to absorb all that. It really helped me look at the fretboard in a different way and got me away from some of my traps.

Right. The way that a lot of people are taught to play jazz, it’s like, “Here’s this chord-scale thing and here are licks that fit over this, and here’s a ii-V-I and here’s a lick that sounds great over that.” That’s a way to learn, but it doesn’t teach you how to improvise and be in the moment. So all of these iconoclastic musicians-Steve Coleman, Butch, Henry-this is what they’ve done. They’ve come up with these systems that allow musicians in their band to explore beyond their comfort zone and create music that has a different quality than someone else’s band, and they’re doing it in such a way that it even pushes them beyond jazz vocabulary.

You have Butch Morris’ “Conduction” system, Steve Coleman and Threadgill’s intervallic system as a backdrop. How did you develop Radiate?

Those guys have cracked their own code, and they’ve been working at it for so long. I haven’t yet developed anything that I could say is purely mine in terms of a codified system. For me, it’s more about things that I’ve learned from being around these people and listening to their music. When I write music, basically I start from an idea. A lot of times it’s something rhythmic, either a groove or a bassline or a small fragment of a melody, and then I try to see where it goes, and that’s an intuitive process. Sometimes I find a melody that I feel is really strong, and I keep writing, and if I’m in the zone, 20 bars later is where I actually find the piece, and I throw away everything else.

What are some of your own compositional rules?

There has to be a melodic shape. I make sure that every line has its own melody. Every part someone plays should stand on its own. That’s one of my rules.

Is the groove on “Supercell,” off the new record, through-composed?

It’s repeated the same way every time but there are variations before the repeat. It’s very subtle. One of the variations is an extra sixteenth note.

But that’s the thing. That’s the fun. And I think it’s really fun to listen to, too. But it’s really pretty simple. I think that when a lot of people play the music, they realize that it’s deceptively simple. It’s important for me that it feels good, but I want there to be intellectual stimulation. I want people to say, “What is that?” And it enables us to have a good time because we’re also challenging ourselves. You don’t want your bandmates to be bored, because that’ll be boring for the audience, too. But then again, I always want it to feel right, even if there could be a moment where what I want someone to feel is a little agitated. That agitation can be right. That’s a valid effect of music-disruption.

Depending on how he looks at it, Kenny Garrett’s latest album, Sounds from the Ancestors, has been out for an eternity or an instant. Recorded … END_OF_DOCUMENT_TOKEN_TO_BE_REPLACED

As I delved ever deeper into the 14 albums that document the Larry Goldings/Peter Bernstein/Bill Stewart trio to prepare for our January Zoom conversation, what … END_OF_DOCUMENT_TOKEN_TO_BE_REPLACED

The musical avant-garde is an area where creative people who have earned wisdom through a lifetime of experience can flourish. Wadada Leo Smith, who last … END_OF_DOCUMENT_TOKEN_TO_BE_REPLACED

Wisconsin-born and proud: For all of the avant-everything complexity Ethan Iverson has applied to his solo projects or the sounds he created in his role … END_OF_DOCUMENT_TOKEN_TO_BE_REPLACED