Skip to content
Become a member and get exclusive access to articles, live sessions and more!
Start Your Free Trial
Home > Features > Gretchen Parlato: The Art of Inspiration 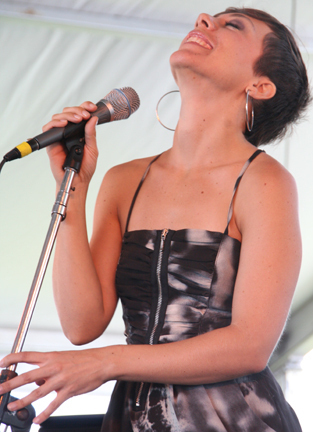 Gretchen Parlato’s career ignited after winning the Thelonious Monk Vocal Jazz Competition in 2004. This honor was a game changer in vocal jazz for honoring a singer’s musicianship and connection with the band versus a big voiced performer in front of the band. Gretchen’s touring schedule these days is one which any young or old jazz singer would be thrilled to call their own. Vocally, Gretchen possesses a sexy, breathy sound with excellent pitch. Her rhythmic precision, control and overall musicianship are obvious from the downbeat when you hear any of her recordings.

• #1 Vocal Album Critics Poll and she will perform in the upcoming Newport Festival.

This interview was posted originally on my JVOICE blog.

Roseanna Vitro: Did you always want to be a singer?

Gretchen Parlato: I have been singing my whole life. I learned to sing as I learned to speak. It has always been a part of my life, at home or in school. It wasn’t until around fifteen that I realized it was my calling. Before that, I had ideas of being an actress, or a teacher or a veterinarian.

Were you a disciplined student in school or a student who didn’t have to study to play well?

I was fortunate enough to have a great arts program in elementary school, junior high, and then continued at Los Angeles County High School for the Arts. I also come from a musical family, so the discipline of being a studied, educated and disciplined artist was engrained in me. However, I came to a realization some years ago that music is in me all the time, whether I practice long hours or barely at all. Singing itself does come very naturally and the end result is seemingly effortless. But I have and continue to work very hard at my craft.

Your father is a well-known musician in Los Angeles. Did he inspire you to be a musician?

My father, David Parlato, is a bassist. His father, Charlie was a trumpeter and singer on the Lawrence Welk Show; he was the little Italian guy! My mother is a web designer and she studied fine art and music in school. Her father was a recording engineer (he recorded Ella and Louis and the Beatles). Her mother had a radio show in the 1940s. My uncle Dennis is an actor, dancer and singer. My sister is a graphic designer. All my aunts and uncles are involved in the arts or have artistic talents. I have been surrounded by art since birth. I think art by being both in my nature and nurture has been my biggest inspiration. I grew up learning that art was just as important as any other subject or profession. So, I could say that my entire family had an influence on me as an artist. I should add that it wasn’t ever forced upon me or assumed that I’d be an artist. It just happened to be my calling and passion.

When did you start to improvise and who were your inspirations?

I began singing jazz in high school. I had grown up hearing it in my home, but never really put a label on it until I was a teenager. I was in the vocal jazz ensemble in high school and my teacher, Pat Bass asked me to sing the lead on “So What,” so I learned “Miles” solo and the vocalese lyrics by Eddie Jefferson. At the same time, I became infatuated with bossa nova and learned all the songs from the Getz/Gilberto album. I used to sing “Desafinado” and sang Stan Getz’s solo. So my first attempts at improvisation were learning and performing instrumental solos. I did grow up listening to Bobby McFerrin, Al Jarreau, Sarah Vaughan, Ella Fitzgerald, Nancy Wilson, Billie Holiday, Chet Baker. Later on, I became interested in Shirley Horn, and Betty Carter. I was also influenced instrumentally by Miles Davis, Charlie Parker, Keith Jarrett, Wayne Shorter and Herbie Hancock. My focus was learning solos, studying phrasing, realizing the affective use of space and the intent of each note, plus telling a story and having a shape in your solo.

What music schools did you attend and which classes were the most effective for you in ear training and concept?

After attending Los Angeles County High School for the Arts, I continued my education at UCLA, studying ethnomusicology, with a specialization in jazz studies, a department started by Kenny Burrell. I was fortunate enough to study theory and ear training all throughout high school and continued world music theory and jazz theory at UCLA. My most influential ensembles were the “West African percussion ensemble” taught by Leon Mobley at my high school and “The Music and Dance of Ghana” at UCLA taught by Lobla Ladzekpo.

I continued my studies at the Thelonious Monk Institute of Jazz performance and being able to study under Terence Blanchard for two years definitely influenced and opened up my ears, my private vocal study was hugely effective in my understanding of jazz. Right after I graduated high school I began to study privately with Tierney Sutton. We used to sing along with Jamey Aebersold cassettes (yes I said cassettes!) and I’d learn standards and improvise with her.

You have a very distinctive, hushed, in tune sound and you’re very musical. Who or what inspired your sound?

Thank you. A while ago, I attended a master class taught by Bobby McFerrin and he said, “I sing like I speak.” This was an enlightening moment for me. We all have our own unique and honest vocal sound. Underneath anything affected or forced is a very pure, simple, completely emotionally connected tone. It seems at a certain point, we should stop trying to sound like anyone else and just sing from our heart, from our soul, sing as we would speak.

Before I came to this realization in my own voice, I sang musical theatre, imitating my favorite character singers or singing along and imitating Julie Andrews, whom I adore! I sang in choirs learning how to have a straight toned, but somewhat operatic quality. I also grew up on pop music, belting out my favorite songs and trying to sound as much like the lead singer as possible. Then I heard singers like Bobby McFerrin and Joao Gilberto who moved me to tears and gave me goosebumps with their intimate and much more subtle approach. I feel like I may have asked myself in my head, “you can DO that?” Their approach to singing and emoting really hit me in my core. I think that is the beauty of art: the capability to have a physical and emotional reaction to it.

So after hearing them and beginning to sing jazz myself, I realized that I needed to shed any preconceived notion of what a “jazz” singer is supposed to sound like. Just sing like “me,” to tell my own story, to use my own natural sound and stop trying to sound like anyone else. If you have a naturally big resonant sound, that is wonderful. If it is rather understated and delicate, that is wonderful too.

I think the next step is to challenge yourself, to still push the dynamic range of the voice. Still dig deep and uncover the most vulnerable raw emotion connected to each word, each note. So sometimes people think my voice is really quiet and hushed and compared to many voices, it is. But if you listen closely or maybe attend a live show, you might hear me at the top of my dynamic range or realize that my voice is still resonating completely and purely, it’s not in a forced whisper. I just happen to have a natural breathiness or air surrounding my voice. I’ve been hugely influenced by singers who I may sound nothing like, but I learned from the quality, tone, vibrato of their voices. Singers like Stevie Wonder, Donny Hathaway and Kim Burrell, etc.

Do you have any advice for all of the young singers that you’re inspiring and do you practice a lot?

The voice is a very personal thing. My goal, which I continue to strive for every day, is to reveal myself as I sing, to tap into both a higher and deeper spiritual place, and to connect with other humans through art. Singing becomes almost like therapy, like meditation. Yes, I practice. I am disciplined in my art, but i also like to have a balance where there might be no sound surrounding me at all. Silence is just as effective as sound to me.

Singing becomes such a gift when you realize it can change your own life, as well as the lives around us. When we realize that we can make people feel something when we sing, be that a positive or a negative emotion, it’s a feeling, a reaction. It is so powerful. The more we can connect our own lives to every note and word that comes out of our mouth, the more content, compassionate and healed we can be and we just pass this onto others.

Do you feel lyrics are an important part of your musical presence? Do you ever improvise using your lyrics instead of scat syllables?

Absolutely! This is what separates singers from instrumentalists. We have words. We have a story to tell. I think it is amazing to improvise using the lyrics of the song and I heard this early on, with Ella, Sarah, Betty, etc. Tierney and I used to practice this together, she’d ask me to sing the melody, then scat the melody with words and then take a solo. There is a different part of your brain at work when you scat the lyrics, as we are still connected to the story of the song. I think this is how we learn the beauty of phrasing.

You won the Monk Vocal Competition a few years ago and now your career is really in flight. What are your newest goals?

In August 2011, I recorded my album The Lost and Found on the Obliqsound label. I wrote many songs on the album, both music and lyrics, so continuing to compose is a goal of mine. I’d love to collaborate with other musicians and I love being asked to sing on other projects. I am really grateful for that. I love being challenged to use my voice in more instrumental contexts, or in other genres of music. I love teaching as well and I’m always inspired by other singers.

I just want to continue on this path, with music; performing, recording, teaching, allowing the music to transform and heal me and hope to share that with the listener.

Gretchen Parlato will be performing at the Birchmere in Alexandria, Virginia on May 12. For more information on Gretchen’s schedule go to her website.

As the lights dim, a dog wags its tail as it looks up at its master, a tall, clean-cut man whose silhouette fills the doorway … END_OF_DOCUMENT_TOKEN_TO_BE_REPLACED

Depending on how he looks at it, Kenny Garrett’s latest album, Sounds from the Ancestors, has been out for an eternity or an instant. Recorded … END_OF_DOCUMENT_TOKEN_TO_BE_REPLACED