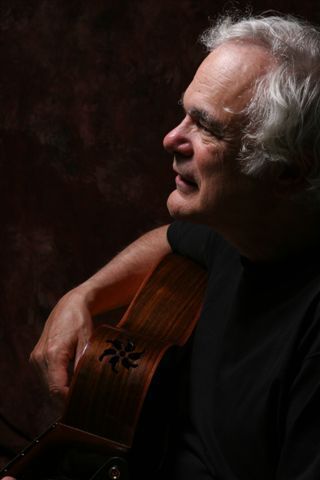 Guitarist Gene Bertoncini loves music. But just as importantly, he loves people, and feels this focus directly influences the way he plays. He also credits his early architecture studies with giving him a sense of form and proportion that contributes to his beautifully crafted arrangements and performances. Gene and I met in NYC in 2006 for the following conversation.

What follows is an excerpt from this conversation that was aired on my Judy Carmichael’s Jazz Inspired radio show in 2006.

How has your background studying architecture affected your music?

When I went to school you had to prepare a set of drawings for a client. You had to have a complete concept of a project. I think I took that whole concept into arranging for an audience. I wanted to present more than say a sketch or a jam session or something that was totally improvised to really present something that was well thought out and conceived. Each type of structure architecturally is sort of like a tune and each one has a character of its own and you can design a well-balanced conception of how to perform that, how to present that to a client, in fact which is your audience.

I think a lot of musicians have lost track of the client.

I do too. They get pretty self-indulgent up there. They lose the idea of telling a story with their design. They just think of flash. I’m not going to criticize, because it’s nice when people are impressed with that, but I prefer a well-balanced piece of music.

To talk to a jazz musician who thinks this way is really something. Do you really attribute that to studying architecture?

And to a love of people. Which goes all the way back to my family and my good upbringing. If you care about people, you want to give them something they can digest.

You want to communicate. I’d also read that your parents were very supportive of what you wanted to do.

I can tell you one story that has meant so much to me and I tell it a lot. My dad and mom struggled a lot to put me through architecture school. I went to Notre Dame University. They came out in the car for the graduation and the car broke down. They saw me get an award for architecture. My dad was real proud. Being from Italy, he always thought a college education was it. I did that and got a degree. Not too long after that I was working in a bar in the Bronx with a group with Mike Mainieri and myself, on top of a bar. My dad came down just to see me. He sat at the bar next to a hooker and somebody from the Mafia. He was there looking at his son play. I couldn’t imagine what he was thinking, because I know the struggle he had. When I got off the bandstand, I went over to talk with him. He put his arm around me and said, “Son, whatever you want to do, I’m behind you 100 percent.”

I well up every time I think of that.

Because it’s so important.

Can you imagine if that could be a guide for everybody, for every parent? To give the child a chance to explore what they want to do.

One of the things I love so much about your music is that when you’re playing with other people, you really are communicating. It’s really like puzzle-pieces coming together. We know that’s what the goal is. But with a lot of musicians, it is more about them, rather than what’s best for the group. As you talk about getting the kind of support you did from your family and your really loving people, it does make you play the way you do.

It keeps you humble, I think. That gift comes with a responsibility.

You have to keep that responsibility in mind and live by it if you can.

Talk about Michael Moore and duos in general.

I can’t explain the rapport that happened between Mike and I. It’s just an amazing thing. First of all, we agreed on what constituted good music. We both liked tunes. We liked standards. Neither one of us liked to play too many choruses. It felt like it could be said in one or two choruses. Mike was just a fantastic supportive player, as well as brilliant soloist, both pizzacato and arco. I don’t think anybody plays arco as warmly as Mike.

Explain what arco is.

Arco is when you play the bass with a bow, as opposed to plucking it with your fingers. And you create this long beautiful cello sound. Or bass-like sounds. Mike played all over the instrument and in the upper register with the sweetest warmest sound. It was great to figure out ways of accompanying him as if I was accompanying a soprano. We used to do “Danny Boy” and make everybody cry or “Ave Maria.” He just nailed it. We got along great too. We had a lot of fun together on the road. And it’s still that way.

Explain to our listeners who aren’t musicians how you arrange a song and make it sound fresh and improvisational even though you’re building a structure.

I took a lot of classical guitar lessons at some point. Having played the classical repertoire to a degree – I don’t claim any real classical chops – you see how the guitar is used almost like a little orchestra. how these things have to be worked out to perform. There are some guys who have an enormous amount of things in their arsenal. The thing I like to do is work out arrangements where I write them out. I do write them out, like this arrangement of “Body and Soul” I came up with some new harmonies on it and I worked at it so that I have this arrangement. I feel like the guitar is an orchestra or my own big band. And I’m playing Chart No. 47, and I play it the same, but there’s room in there for improvising, so that I bring both aspects of the whole creative process to my work. Working out an arrangement, in a sense it’s almost like composing, using different aspects I learned from all areas of the guitar and then having a couple of choruses where I just improvise. I do head things, off the top of my head. That’s totally spontaneous and sometimes I fall on my face. [laughs]

We all do. I know the beginning and end, so I know how I’m getting in and getting out, and in between I hope for the best.

Some restaurants get away with murder, because they have a nice little appetizer and a great dessert, but in the middle, the entree really sucks.

That’s not supposed to happen with restaurants! With jazz, we’re supposed to be on edge. Talk about George Shearing.

I was very much influenced by the original guitar player with that group, Chuck Wayne, who was my second teacher. That group was very important to me when I was first listening to the radio. I first listened to Benny Goodman. That’s another gift. Why did the son of an Italian immigrant all of a sudden go to the radio and want to be around Benny Goodman? My brother also. We used to wait for these shows to go on and hang by the radio. All of a sudden we were both playing jazz and listening to jazz. My brother was a wonderful jazz accordionist. He learned the standards before I did and taught them to me.

That’s inspiration. That somebody like Benny Goodman can reach out to these two boys and grab them and drag them over to the radio and getting them into wanting to play.

What a gift he had.

And George Shearing was on the radio as well.

He came right after that. I started to listen to this great quintet doing “September in the Rain” and “East of the Sun” and great tunes like that. I subsequently found out that the guitar player who created that warm guitar sound was Chuck Wayne. I got to meet him after I went to college. I used to go hear him play. He was the first guy I heard using the guitar completely like that.

When I was a kid, my brother and I used to do a television show called “The Children’s Hour” on Sunday morning. Occasionally we would go down there. I’d sometimes wear a cowboy outfit.

How old were you?

I was about thirteen.

We used to accompany singers sometimes. A guy named Ed Hurley was the announcer and the product was Kraft Cheeses. I used to wander around the studios. I wandered next door one day and I saw this guitarist and they were doing this mystery show. They had live music. They were playing all the cues and it was fantastic. The guitar player sounded great. He put the guitar down and then he picked up the trumpet and played that. He went over and played a little piano. I went up to him. I must have looked cute too, in my cowboy outfit.

I can picture you in that cowboy outfit. You’d still look cute in that.

I told him I played guitar. And he said, “Well play me something.” So I played him my little arrangement of “Honeysuckle Rose” which I can still play. I was studying with a little jazz teacher. He kind of liked it. I asked him if I could take a lesson with him. He said, “Next time you come over, we’ll have a lesson.” Next time I came by, he gave me a half-hour lesson. It was the great Johnny Smith. I really learned a lot about the pure technique he had and also the harmonic aspects of the instrument. He treated it like a piano. There was something about Johnny that was really special. When I was studying with him off and on for the next few years, he came out with an album with this tune called “Moonlight in Vermont.” Which was really like a benchmark guitar album, with Stan Getz on it. It really became almost like a hit record.

How do people inspire you?

It’s wonderful in life there are a few people along the way maybe say one thing to you that stays with you forever. Or they teach you something that is so valuable and you get these kicks in the butt along the way that are so important if you look back on your life.

To listen to the entire conversation with Gene Bertoncini, along with his music and the music that influenced him, or to hear interviews with other notable people inspired by jazz, go to Judy Carmichael’s Jazz Inspired web site. Originally Published July 8, 2010

Depending on how he looks at it, Kenny Garrett’s latest album, Sounds from the Ancestors, has been out for an eternity or an instant. Recorded … END_OF_DOCUMENT_TOKEN_TO_BE_REPLACED

As I delved ever deeper into the 14 albums that document the Larry Goldings/Peter Bernstein/Bill Stewart trio to prepare for our January Zoom conversation, what … END_OF_DOCUMENT_TOKEN_TO_BE_REPLACED

The musical avant-garde is an area where creative people who have earned wisdom through a lifetime of experience can flourish. Wadada Leo Smith, who last … END_OF_DOCUMENT_TOKEN_TO_BE_REPLACED

Wisconsin-born and proud: For all of the avant-everything complexity Ethan Iverson has applied to his solo projects or the sounds he created in his role … END_OF_DOCUMENT_TOKEN_TO_BE_REPLACED