Skip to content
Become a member and get exclusive access to articles, live sessions and more!
Start Your Free Trial
Home > Features > The Music of Fred Rogers’ Neighborhood

When Mister Rogers’ Neighborhood made its public-television debut on Feb. 19, 1968, its creator and host, Fred Rogers, already knew that music would play an important role in the show; he was, after all, a pianist and composer himself. But for most of the program’s 31-season run, the melodies Rogers wrote would be given a distinctive character by musical director and Pittsburgh jazz-piano great Johnny Costa. Deeply interwoven within Rogers’ kindly and compassionate approach to instructing youngsters—and addressing such weighty topics as divorce, overcoming fear or feeling angry—was some of the most colorful and creative jazz ever aired on national TV.

What Costa, who died of anemia in 1996 at age 74, brought to the show was a sense of improvisatory sophistication that exposed millions of kids to a complex music form they might not otherwise have heard, save perhaps for Vince Guaraldi’s work on A Charlie Brown Christmas. Early on, some criticized Rogers’ inclusion of jazz, saying it was too sophisticated for a children’s show. But over the years, the music that accented those 895 half-hour episodes has become one of the program’s strongest legacies, thanks to both the in-house talent and the array of guests who stopped by—including Wynton and Branford Marsalis, Yo-Yo Ma, André Watts, synthesizer pioneer Bruce Haack and Tony Bennett.

In honor of the 50th anniversary of Mister Rogers’ Neighborhood, we brought together a few of Fred Rogers’ closest collaborators and some great modern jazz musicians who were inspired by the music they heard on the show. They all spoke with obvious affection about the way this humble, heartfelt program and its gracious host made us better people, and better listeners. RON HART

Renee Rosnes: Fred Rogers had a very special intelligence and humanity. He always made it feel like he was speaking directly to you. He wrote beautiful, enlightening songs, and the sound of Johnny Costa’s piano playing added a rainbow of colors and emotions.

Roger Kellaway: The music that Costa and his trio played seemed to have that same comforting quality that Rogers had in the way he addressed his audience. How delightful for children to be in such a comfortable situation with such delightful music.

Joe Fiedler: I was born in 1965 and moved to Pittsburgh in 1969, the year after Mister Rogers debuted. So I was watching from an early age and [I was] a big fan—I remember having a Mister Rogers T-shirt with the Neighborhood Trolley on it. As the show was produced in Pittsburgh, coincidentally I grew up a short walk from his house and would sometimes see him in the actual neighborhood. As for the music, of course I loved the iconic opening theme. I loved Johnny Costa but actually became a big fan of guitarist Joe Negri (“Handyman Negri”), a recurring character on the show. He’s a Pittsburgh jazz legend and I used to see him perform often. But the main thing that has always stayed with me is the kindness of Fred’s songs coupled with the sincerity of his delivery—he was so masterful. Ironically, I became both a professional jazz musician and active in children’s television. For the past nine years I’ve been one of the music directors for Sesame Street.

Orrin Evans: I was one of those weird kids who would watch the credits of all my shows. … I was fascinated with what year each episode came from. So, sitting there watching the credits to Mister Rogers, I’d always see Johnny Costa’s name as the musical director of the show. I didn’t know the whole Pittsburgh connection at the time; I was just in love with the music of Vince Guaraldi, and digging into Johnny Costa was the next step. They made it cool for me, as a kid, to appreciate jazz.

Bob Rawsthorne, percussionist for the Johnny Costa Trio: When John Costa first took the job, he told Fred, “Look, I’m gonna do this but I’m not gonna dumb down the music to make it for children. I’m going to play the way I play.” And Fred said, “OK, good. That’s what I want.” John was a genius, really. He had this story where he was playing at a club in Pittsburgh, and Art Tatum came into the club and said to the maître d’, “Oh, you have my record on.” And they said, “No, that’s not your record—it’s our piano player.” [laughs]

Joe Negri, guitarist and actor (a.k.a. Handyman Negri): I remember talking to Joe Pass once, and he was saying, “Boy, you don’t know what pressure is until you’ve played with Oscar Peterson.” And I said to myself, “Well, you’ve never played with Johnny Costa.” [laughs] That was no day at the beach either. Johnny played really close to an Art Tatum style. He had a lot of technique and a brilliant right hand. He was an accordion player when he was a kid, and I think that’s how he developed that speed.

Uri Caine: I can’t claim to have watched a lot of Mister Rogers in my youth, but I definitely remember seeing the show, and when the music came on at the end, I immediately said, “Who was that playing?” It was so swinging, and the pianist had such incredible chops! I also loved the other music [in the show]: dreamy interludes on celeste and a lot of humorous clusters and sound effects.

Rawsthorne: John realized he’d better have something else for me to do, because the drums weren’t going to be predominant. So he started writing those vibraphone parts, and they became the sound of the show. A lot of what we did was totally improvised. The most improvised moments were when Fred would have these films—“Picture Picture,” he called it—and he’d put the tape in and you’d see how they made tennis shoes or something. John was sparse when we needed it or livelier, depending on the subject of the film.

Negri: During the taping of the regular segments, which we did a couple of times a week, Johnny would be in the studio and totally ad lib behind us. Occasionally Fred would have to say, “You don’t have to play all the time.” [laughs] I remember him distinctly saying, “You know, silence is pretty good once in a while.” Because Johnny could get very busy. He used to remind me of the pianists who played during the old silent movies, who’d look at the movie from the balcony or wherever and play to the film. That’s what Costa did; he just sat there and played along to whatever Fred was doing.

David Newell, actor (a.k.a. Mister McFeely, the “Speedy Delivery” mailman): We did a lot of symphony concerts with Fred’s music. I’d be the host and the other cast members would be there to sing, but then the last half-hour was Fred, and he’d do the puppets, sing songs, etc. Johnny would always open the concert by doing a solo-piano overture of Fred’s songs, but he’d never do it in rehearsal because he didn’t need to rehearse. And so every time we’d open the show, Johnny would come out and play, and the musicians would be dumbstruck. These were tough symphony musicians, and they would stand up and applaud for Johnny.

Craig Taborn: Every episode of Mister Rogers’ Neighborhood is a unique and focused spontaneous composition by Johnny Costa. At the end of the show, after Mister Rogers bade the audience farewell, Costa would kick into a different groove each time and improvise over the tune “It’s Such a Good Feeling”—sometimes uptempo bebop, sometimes samba, sometimes midtempo swing. At some point I’d like to get my hands on a [recording] of each of those closing statements. [The show was] probably the most documented resource of a jazz pianist improvising on the same tune and continually finding something new.

Robert Glasper: Johnny Costa was the reason I watched Mister Rogers, honestly. He was a master at making the piano the soundtrack to the flow of the show.

Rawsthorne: Near the end, John got pretty sick, but it didn’t affect his playing. And the last couple of films we did, he was really sick. I remember the bass player, Carl McVicker Jr., said, “Hey, John, what key do you think we’re gonna start in?” And John looks at him and goes, “Carl, only God knows what key we’re gonna start in.” [laughs] Then I see Carl and he’s crossing himself, and I’m like, “Carl, you’re not even Catholic!” [laughs] I really consider myself fortunate to be part of that whole deal.

Wynton Marsalis: The main thing I remember about being on the show was, from the people who picked me up from the airport to everyone around the set, how much they loved [Rogers]. I had never been in an environment where people had so much genuine love for their employer. And it wasn’t some type of programmed thing. He was actually like he was on the program. Even though it was thirtysomething years ago, I’ll never forget that.

Matthew Shipp: In every way, [Rogers] was an amazing human being. I was at an ASCAP event a couple of years ago and his widow was there, and I had a long talk with her. She was there with one of the guys who used to produce the show and claimed to know who I was. I told him how cool I thought it was, what they did with the music. Then he asked for my address and he sent me a bunch of Johnny Costa albums! [laughs]

Helen Sung: When people want to know why I switched from classical to jazz piano, [they ask] if I ever listened to jazz growing up. I say [that] probably the only jazz I heard was the music from Charlie Brown and Mister Rogers’ Neighborhood. So thank you, Mister Rogers, for planting seeds in me that would help me eventually—and most unexpectedly—find a life in jazz music.

[Sign up here for the JazzTimes enewsletter with the latest news and stories from the jazz world.] Originally Published July 19, 2018

As I delved ever deeper into the 14 albums that document the Larry Goldings/Peter Bernstein/Bill Stewart trio to prepare for our January Zoom conversation, what … END_OF_DOCUMENT_TOKEN_TO_BE_REPLACED

The musical avant-garde is an area where creative people who have earned wisdom through a lifetime of experience can flourish. Wadada Leo Smith, who last … END_OF_DOCUMENT_TOKEN_TO_BE_REPLACED

Wisconsin-born and proud: For all of the avant-everything complexity Ethan Iverson has applied to his solo projects or the sounds he created in his role … END_OF_DOCUMENT_TOKEN_TO_BE_REPLACED 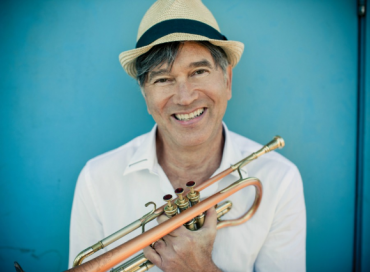 Since releasing his debut album in 1992 for Mesa/Bluemoon, Rick Braun has established himself as one of the most popular and prolific artists within the … END_OF_DOCUMENT_TOKEN_TO_BE_REPLACED