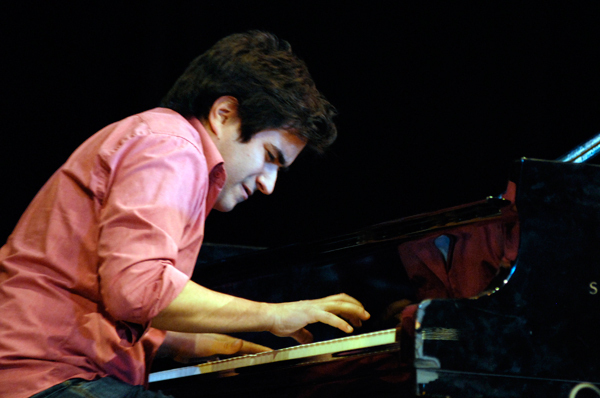 The young Cuban piano virtuoso Harold López-Nussa first came to the attention of many U.S. jazz buffs a couple of years ago via #Ninety Miles#, the cross-cultural collaborative project spearheaded by Stefon Harris, David Sánchez and Christian Scott. But López-Nussa has been gaining recognition internationally for a while now elsewhere, having won the Solo Piano Contest at the 2005 Montreux Jazz Festival, toured widely in Europe and performed twice at the Montreal Jazz Festival (where he’ll make a third appearance on July 1). Now the 29-year-old is finally embarking on his first tour of the U.S., as a duo with his drummer/vibraphonist/percussionist younger brother, Ruy Adrian López-Nussa. We caught up with the pianist as he began the east-coast leg of their five-stop trip, which concludes Friday at the Regattabar in Cambridge, Mass.

How has the tour been going thus far? Are you happy with the reception you’ve been getting in the U.S.?

I’m really very happy. It’s our first time in the United States and it’s a great experience for us because here we can see great musicians releasing great music, and we can buy some new music for us. I’m very happy because we are making San Francisco like 11 shows, and there are always people in the shows and people love it, and this is really great for my brother and I. I’m excited.

You often perform with a trio, but for this tour it’s just you and your brother. Is that an artistic decision or because of something more practical (Visa issues, travel expenses, etc.)?

Well, the first time was the producer’s decision because there’s not a lot of money for the trio or quartet maybe, but after that we have been working a lot in Havana making concerts there and I think I will have to play more in duo because it’s exciting, and I will have to play very different than I will in the trio. The duo is not that frequent so we have to try and make them more frequent, and it’s always exciting to try to make something sound good with only two people, like percussion and piano. I think just right now, after 11 shows, we are lucky because we are homesick together. I want to play more in this format, I hope.

Your two performances in California were both at concert halls. On the East Coast you’re playing nightclub dates. How might that alter things for you and the audiences? Do you prefer larger or smaller venues artistically?

I love to play clubs. It’s more intimate. The people are closer to you, they’re more free to eat, to drink, to sometimes talk. And it’s different when you play in a concert hall, but I love both. They’re different, but I think it’s going to be great for us.

Cuba has produced several outstanding jazz pianists in recent years. Is there anything about your style of playing that makes it particularly recognizable? Your classical training, for instance.

Well, I don’t know. I’m not the right person to say that. I just try to make my work. I learned from the greatest keyboard players like Chucho Valdes and my uncle who is a piano player. Also, from my friends at the school. Because in the school we only have classical training but we learn there the recordings of jazz and the concerts with the musicians and we find information from France, so it’s like that. Right now I just try and play whatever I think or I feel or I like to play. I play with a lot of Cuban style and some jazz style also.

You have a new album, New Day, coming out this fall on the Jazz Village label. Can you tell us a little about it? Will it be a duo album, a return to the trio format or something else entirely?

Yeah, it’s something really important for me because the last two albums were recorded in France and this album we recorded in Havana. And that was great, to make the recording in my country with my family and my friends there. And also I played for the first time electrical piano and my brother played a lot of percussion on the CD. And it’s different, but that brings to us new sounds and new experiences and new inspirations for playing. This whole album is only my compositions, so I’m very happy with the result.

Depending on how he looks at it, Kenny Garrett’s latest album, Sounds from the Ancestors, has been out for an eternity or an instant. Recorded … END_OF_DOCUMENT_TOKEN_TO_BE_REPLACED

As I delved ever deeper into the 14 albums that document the Larry Goldings/Peter Bernstein/Bill Stewart trio to prepare for our January Zoom conversation, what … END_OF_DOCUMENT_TOKEN_TO_BE_REPLACED

The musical avant-garde is an area where creative people who have earned wisdom through a lifetime of experience can flourish. Wadada Leo Smith, who last … END_OF_DOCUMENT_TOKEN_TO_BE_REPLACED

Wisconsin-born and proud: For all of the avant-everything complexity Ethan Iverson has applied to his solo projects or the sounds he created in his role … END_OF_DOCUMENT_TOKEN_TO_BE_REPLACED