Skip to content
Become a member and get exclusive access to articles, live sessions and more!
Start Your Free Trial
Home > Features > Everybody Digs Ralph Towner 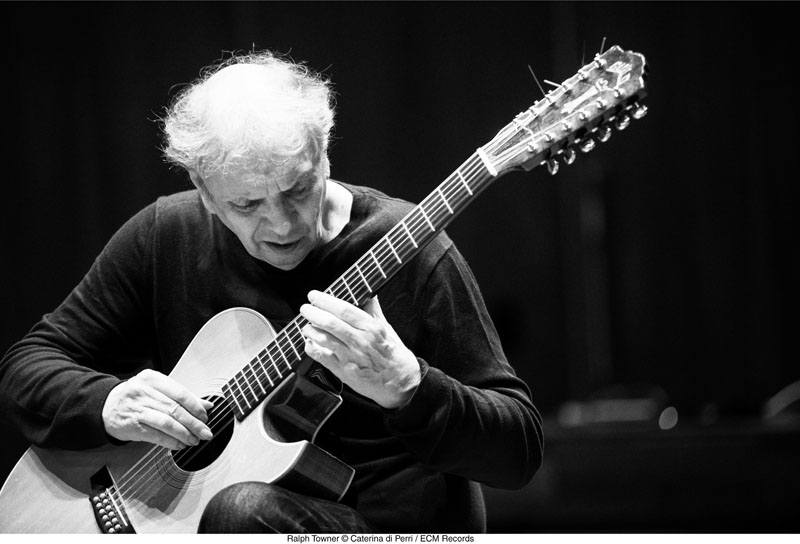 If you closed your eyes while listening to the music emanating from the stage of New York’s Jazz Standard in mid-February, you could be forgiven for thinking it was being created by more than one person. Ralph Towner’s fingerpicked guitar odysseys project an orchestral grandness at times, a pianistic wholeness. All at once, he can offer a baroque stateliness, percussive, odd-meter rhythms and eloquent melodic runs that might disappear within seconds or tell an in-depth story. There’s a lot of music pouring out of that lone guitar.

Not surprisingly, Towner learned to play piano before he ever picked up a guitar, and it’s a pianist, Bill Evans, who is the object of Towner’s adoration in the liner notes for his latest ECM album. Towner was so inspired by the classic Evans Trio’s version of the standard “My Foolish Heart”—recorded at the Village Vanguard in 1961 and released on the seminal Waltz for Debby—that he made it the album’s title track and only non-original piece.

At Jazz Standard, prior to playing the tune, Towner called the trio’s take “life-changing,” and the guitarist’s deft touch, expressiveness and measured choices in that one song spoke volumes about his own lifelong dedication to craft and communication. Currently based in Rome, Towner, 77, spoke to JT by phone a few days before the gig, chatting about the art of solo guitar, his Evans obsession and the new work by Oregon, his long-running, landmark world-fusion group.

JazzTimes: What different restrictions do you face as a collaborator and as a solo guitarist?

Ralph Towner: There’s something about having the freedom to basically direct the music yourself. Guitar is such a good solo instrument; there’s a sense of playing an ensemble kind of music, but on your own. You certainly have a different role. With others, it’s several people playing a single piece of music. In jazz, they’re all composing as they’re playing, even if there’s a pre-organized tune that you’re playing on or a completely freeform piece; it’s still composition. When you’re on your own, basically you’re the only composer.

When you’re playing solo, do you ever feel that you’re compensating for the absence of other instruments?

If you feel that what you’re playing is lacking, or that you owe something, you’re not even in the ballpark; you’re not playing music. It’s like being paid by the note—the bulk approach. As you develop as a soloist, you discover more and more that it’s really about the music and not so much about the circus of one man doing something.

You’ve been recording for ECM for 45 years. Does [producer and label founder] Manfred Eicher ever make musical suggestions or does he just record whatever you want to do?

Sometimes when you’re playing a free piece, either solo or with a group, and it looks like you’re about to end it, which is what you want to do, he’ll stand up in the control booth and wave his hands to keep playing [laughs]. But he doesn’t tell you what to play at all. We have a nice relationship, as far as recording. There’s not a lot said and you feel secure in the fact that he has control over the sound that’s being recorded.

What about the Bill Evans Trio moved you when you first heard the band?

No one hit me with quite the impact as Scott LaFaro, Bill Evans and Paul Motian. What they were doing and the way the harmony moved, the left hand voicing with the bass, how LaFaro could alter the whole sound of the music, how he played in broken time—it was amazing. Bill’s whole approach, and the way it fit together, was so profound to me. I wanted to know what it felt like to play music that way. It was a total package and very mysterious.

All the other pianists sounded like virtuosos. They wouldn’t let you forget they were playing the piano—not all, but some in particular. They made it seem too difficult. But when I heard this trio, the music just took me out. I could not believe the beauty and the reverence of it, and the way it moved. In other words, I wasn’t aware that it was a piano after a while. It’s sort of the way I felt about Miles Davis. You never said, “Miles was such a good trumpet player.” It sounds funny to say that, because he wasn’t a trumpet player; he was some kind of genie.

Two of the originals on My Foolish Heart, “Shard” and “Rewind,” are solo remakes of songs you first recorded with Oregon. I understand the group has a new album coming out on CAM Jazz ON JUNE 30.

Yes. It’s called Lantern. Left standing at this point are the two originals, [multi-instrumentalist] Paul McCandless and myself. We have a relatively new bass player, who’s been with us almost two years, Paolino Dalla Porta. The drummer [Mark Walker] has been with us longer than any other drummer, more than 16 years. We just finished a nice tour not long ago and we recorded at the end of the tour.

When you listen back to your early work, whether with Oregon or solo or with others, does it still hold up for you?

Yeah, I’m usually surprised and impressed, more than I thought I would be! [laughs] In general I’m surprised at the quality and the imagination and the breadth of everything. The way I play now is obviously a product of all that. I’m a little more comfortable with what I’m doing. I’m just dealing more with the music and the direction it goes. I have a broader perspective now. I don’t know how it sounds different, but nobody would tell me to my face, “You’re playing pretty bad.” [laughs] Usually people say something nice or they don’t say anything at all. I think the best way to have a line that goes through your whole career is not to be too conscious of it. I don’t think I can afford to stop and hear what I did and make a judgment on it. Maybe if I got stuck in a rut I would use that to jar me a little. If you keep your mind on the music itself, you can only play what interests you. Originally Published May 26, 2017

Depending on how he looks at it, Kenny Garrett’s latest album, Sounds from the Ancestors, has been out for an eternity or an instant. Recorded … END_OF_DOCUMENT_TOKEN_TO_BE_REPLACED

As I delved ever deeper into the 14 albums that document the Larry Goldings/Peter Bernstein/Bill Stewart trio to prepare for our January Zoom conversation, what … END_OF_DOCUMENT_TOKEN_TO_BE_REPLACED

The musical avant-garde is an area where creative people who have earned wisdom through a lifetime of experience can flourish. Wadada Leo Smith, who last … END_OF_DOCUMENT_TOKEN_TO_BE_REPLACED

Wisconsin-born and proud: For all of the avant-everything complexity Ethan Iverson has applied to his solo projects or the sounds he created in his role … END_OF_DOCUMENT_TOKEN_TO_BE_REPLACED