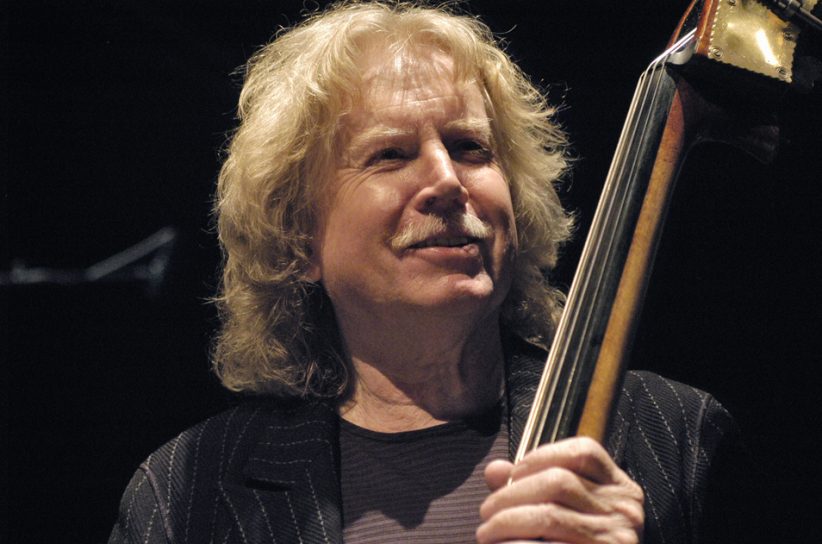 For nearly five decades, bass innovator Eberhard Weber has situated his one-of-a-kind, virtuoso electric upright bass talents within a wide variety of solo and group contexts. From 1974 to 1981, he led Colours, an acclaimed band that seamlessly meshed jazz, neo-classical and minimalist influences. The group also featured saxophonist Charlie Mariano, keyboardist Rainer Brüninghaus, and drummer Jon Christensen. Its releases are considered landmark recordings in the ECM catalog. His solo output also explores the worlds of solo bass and classical chamber music. Weber’s work as a sideman is no less diverse. He’s collaborated with the likes of Jan Garbarek, Stephane Grappelli, Ralph Towner, Joe Pass, Gary Burton, Pat Metheny, and Kate Bush. To say he’s well-versed in varied and complex musics is an understatement. In this excerpt from my book Innerviews: Music Without Borders, Weber discusses his motivation to establish Colours, his approach as a sideman, and the lessons his bass teaches him.

You’ve said your shift to the electric upright bass enabled you to discover the role of leader-something you believe few bassists experience. How did it do that?

In 1972, I got my first electric, upright bass and started playing the kind of instrument I play now. I found that the majority of musicians couldn’t bear that. They weren’t used to listening to the bass because they think it should be in the background to support them. They expect it to be quiet whenever they ask for it. During the good old jazz club times, maybe once or twice a night the bassist would play a solo, but otherwise he had to do whatever he was asked to do. I never accepted that. I can say I ruined two bands as a permanent member. [laughs] The first was the Dave Pike Quartet. The other was a band with the German guitar player Volker Kriegel. I worked with both for about two years. I was so dominating in my playing, trying so much to squeeze in my own ideas, that we couldn’t continue. As a result, I had to get my own playground which was my band Colours.

You’ve done a lot of work as a sideman. What’s your philosophy when working in that realm?

I can survive most of the jobs that are offered to me without trembling, hesitating or having too much fear. There is always a little tension when I don’t know the people or the music involved, but I have a routine that lets me survive-unless someone comes up with an insanely written-out part for bass guitar they want me to play note-for-note. Then I’m frank enough to say “Why don’t you call the same player who came up with this? Why do you want me to play it?” Here’s an example: A composer once called me from Los Angeles who said “I have an orchestra piece. Would you participate?” I replied with something very unusual: “Do you want a bass player or do you want me?” There was a silence for a little while on the phone. He said “Of course, I want you.” And that was the last time he called me. [laughs]

When you’re not recording or performing, you don’t necessarily spend a lot of time with the bass.

No, not at all. I take care of my instrument, but I don’t love it. My instrument is just a device to transport my ideas and feelings. I’m not the type of person who wants to touch his instrument every day. I can give you another example. In the good old days, when one had the chance to go to jazz clubs and there were jam sessions, some would go onstage, including myself. We would play some free improvisation or modal improvisation for a half-hour or so and it was really dynamic, wonderful and perfect for that moment. Then I would put the bass down and leave the stage. The musicians would look at me and say “What’s going on? Why are you leaving?” I said “Because we just had a nice half-hour and it was perfect. If we continue, it’s only going to be repetition.” So again, I’m not interested in playing, but having results. That’s the big difference between me and other musicians.

You’ve called the bass your “life-long occupation” as well as your “greatest adversary.” Elaborate on that.

What I mean is the bass is not my instrument. In a second life, I’d like to be a conductor, but for now, I have to stick with the bass because I know that I play the bass more unusually than most other players. I’m not speaking of quality, but difference. I play differently from anybody else. But I’m never satisfied with what I’m doing. So, in a little bit of a funny way, my bass usually beats back and I don’t like that of course. By “beats back,” I mean there are still things I haven’t discovered yet and the bass knows it better than me.

Depending on how he looks at it, Kenny Garrett’s latest album, Sounds from the Ancestors, has been out for an eternity or an instant. Recorded … END_OF_DOCUMENT_TOKEN_TO_BE_REPLACED

As I delved ever deeper into the 14 albums that document the Larry Goldings/Peter Bernstein/Bill Stewart trio to prepare for our January Zoom conversation, what … END_OF_DOCUMENT_TOKEN_TO_BE_REPLACED

The musical avant-garde is an area where creative people who have earned wisdom through a lifetime of experience can flourish. Wadada Leo Smith, who last … END_OF_DOCUMENT_TOKEN_TO_BE_REPLACED

Wisconsin-born and proud: For all of the avant-everything complexity Ethan Iverson has applied to his solo projects or the sounds he created in his role … END_OF_DOCUMENT_TOKEN_TO_BE_REPLACED