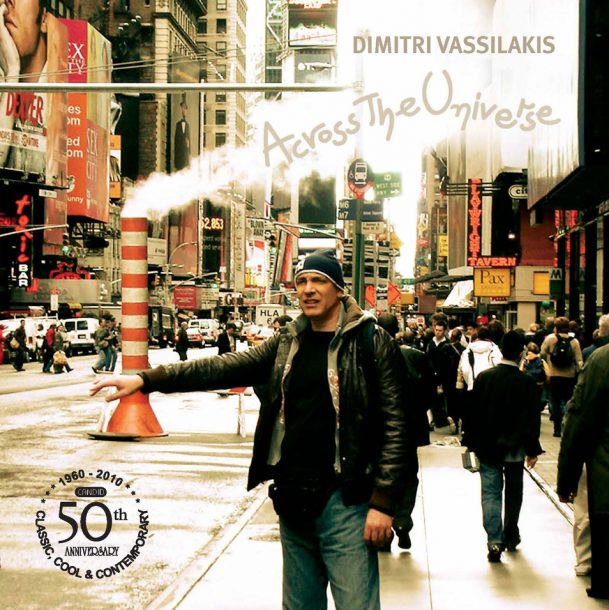 Lilian Alexakou: What is the story of your latest jazz album Across the Universe?

Dimitri Vassilakis: After losing my house and possessions due to a fire, back in 2009, I decided to record this album (my 4th on Candid Records) and unify my favorite music in a traveling mood with the feeling of lightness, not belonging anywhere in particular and not needing a lot of stuff. Recording mates is my NY quartet. Since 2007 we are very good friends being together in festivals, recordings and gigs in USA. Same thing with my guests on the album, I recorded with great cats and friends, so that I will continue to love and listen to this recording after long time…I wanted it to come out bright and positive…

Is there a notice on your vocal talent as you sing ten songs?

I chose to appear with my double face of the horn player-vocalist, something similar to Chet Baker who is one of my main vocal influences. Also it is a way to bridge my background rock influences, as I started in the 80’s – together with my brother Pantelis Vassilakis I was a bass player/vocalist/songwriter of the Greek new wave-rock band Art of Parties. After immersing me into the jazz world, singing was put aside in favor of the sax. I came back to it just after finishing the trio album with Jeff “Tain” Watts and Essiet Essiet (a jazz suite entitled “Parallel Lines”). So my repertoire got broader including almost all the standards in the book and many rock memories…

In your CD cover you are looking for a taxi in Manhattan while in its inset you are in Karitsa, a remote green village next to Lake Plastira – Central Greece. How do you combine so different landscapes?

I love both places for different reasons. New York is the world stage for jazz, there I get inspired, and I contact the scene. I develop myself as a player; I breathe and live with the best cats and beloved friends. Karitsa is a village on top of Agrafa Mountains famous for its complete autonomy, where I escape from everything. I contact with breathtaking nature and I fill spirit and body with pure energy.

Have you created an excellent cd «Jazz For Bentley» in collaboration with the new car model of Bentley Continental GT?

This album consists of selected tracks from my discography on Candid for the 50th anniversary special edition and some tracks recorded especially for Bentley. Since 2007 we collaborate with worldwide festivals and the idea was to connect this luxury brand with jazz. My favorite is «The Long And Winding Road», hope a good version for the drive…

Do you use Greek elements and myths, for example the Cretan labyrinth in cd-concepts?

In my album «Daedalus Project -Labyrinth» -which was recorded in New York and produced by David Liebman – I used quite a few Greek/Balkan elements, always under the jazz and swinging umbrella. It was presented at Birdland, Yale, Smithsonian, South Bank Centre etc. BBC voted it as 2nd jazz album of the year. My intention was to speak a universal language connecting the ancient myth with other references mainly from Joyce and Kafka. More info at my blog below, as this album has become a subject for research from Universities in the US. http://dimitrivassilakis.blogspot.gr/2010/09/labyrinth-saved-as.html

You are the author of the most popular book on saxophone in Greece which received the prestigious Alexander Onassis award. What advice do you give your students?

This book was published to help students more or less of all levels, something that was not in the market, so it is still quite successful as an educational tool in Greece. I completed it after years of teaching many students at Conservatory and University level. During the process I learned so much from my students, some of them already made a name in the scene. My advice: “Follow the path with love and devotion.”

Are you involved in an innovative project named «The Greek Gang! »?

That project is based on the platform tomorrows warriors, which is an award winning educational concept in Britain. Offers jazz education to young players from underprivileged ghetto areas of inner cities. Going back to the early jazz years when there was no formal jazz education and many jazz giants graduated from the Duke Ellington, Art Blakey, Miles Davis etc. “Universities”…

The Greek Gang! is a very active ensemble mainly in London, with some of my ex-students as basis, they grow in time as new Greek jazzers come on stage bringing new sounds and ideas.

My next appearance is a 3-day mini London tour (Ronnie Scott’s, Bulls Head, Arts Depot) for London Jazz Festival 2012, with the aim to bridge the communities through the arts.

Have you invented the Art Escape Movement?

Under the broad title Art Escape I imagine that in nowadays young artist can go out and create without waiting for the institution to pay attention…So if a venue, festival, organization etc is not booking them, then why not unite and make a project together with artists of all kinds – actor, dancer, visual, designer, painter/sculptor musician etc. Then they will present it by themselves and find their own venue, whatever that may be…a park, a friend’s house, basement or loft. Maybe knock at a neighbor’s door and ask if they would like some jazz or Shakespeare or similar with his dinner??… Art is like a Pandora box, can escape institutions and the establishment and becomes a more integral part of life. I will post more on my site soon.

You are a cyclist and marathon runner and BBC Music Magazine called you “Greek god of Jazz”. How do you describe yourself?

I love biking and running and have run the Athens Classic Marathon on its historic celebration year in 2010. Since then also participated in many other races and I keep regularly fit. This is my way to fill up with energy, come in contact with nature and clean spirit and body. Through meditation and energy therapies I find balance, project and transmit clearer.

I consider myself lucky to have been born in Greece! Our collective perception of what is Greece and how Greek people should contribute to the world has been seriously corrupted and damaged nowadays… Greece should still be one of the main sources for new ideas and not the cunning beggar.

I love nature I appreciate the history and language, often I am writing poetry, but in the end as an artist I feel a citizen of the world. Jazz gives me a purpose in life and I consider it a heart path

What are your best influences and memorable tour moments?

Touring with Isadora Duncan dancers, writing music for the ballet and performing at ancient Greek temples…Zinc/Smalls/Fat Cat breathing the New York morning air after the jam…

Are there really great differences between the musical conception of European jazz and US jazz?

Jazz in the US is based on swing and tradition, which musicians enhance and develop. US scene is always the basic source of inspiration, jazz musicians have absorbed the history and the tradition of this art form and in a sense they are a living reference of the old jazz giants. In Europe, on the other hand, we got jazz movements and styles that embrace national idioms and blend different idiomatic styles. Jazz is one of the most democratic, ecumenical and global art forms which accept no borders.

Depending on how he looks at it, Kenny Garrett’s latest album, Sounds from the Ancestors, has been out for an eternity or an instant. Recorded … END_OF_DOCUMENT_TOKEN_TO_BE_REPLACED

As I delved ever deeper into the 14 albums that document the Larry Goldings/Peter Bernstein/Bill Stewart trio to prepare for our January Zoom conversation, what … END_OF_DOCUMENT_TOKEN_TO_BE_REPLACED

The musical avant-garde is an area where creative people who have earned wisdom through a lifetime of experience can flourish. Wadada Leo Smith, who last … END_OF_DOCUMENT_TOKEN_TO_BE_REPLACED

Wisconsin-born and proud: For all of the avant-everything complexity Ethan Iverson has applied to his solo projects or the sounds he created in his role … END_OF_DOCUMENT_TOKEN_TO_BE_REPLACED