Skip to content
Become a member and get exclusive access to articles, live sessions and more!
Start Your Free Trial
Home > Features > Dena DeRose: Beauty in Subtlety and Swing 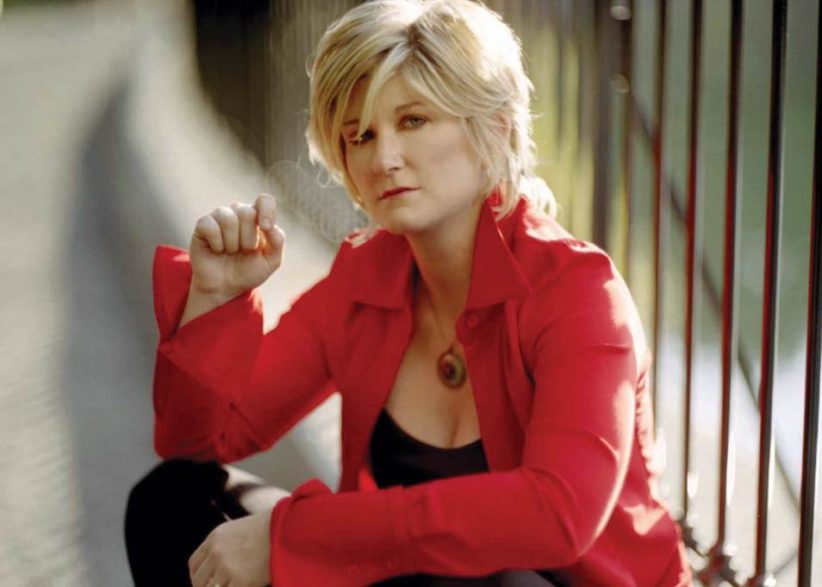 Dena DeRose is a musicians’ musician. She moved from Binghamton, New York to New York City in 1991, honing her craft and making fans everywhere she’s performed. At the age of 21, she was diagnosed with arthritis and carpal tunnel syndrome, which forced her to stop playing piano for almost two years. The good news for jazz fans is the illness pushed Dena to develop her lovely singing voice. In 2002, ’03 & ’06, Dena gained national recognition in the annual Downbeat’s Critics Poll for “Artist Deserving Wider Recognition.” She’s been performing, recording, teaching and earning accolades ever since that time. We don’t see or hear Dena often enough since her move to Graz, Austria, seven years ago. She is the vocal chair at The University of Music and Performing Arts in Graz. I was lucky to catch Dena on tour promoting her new solo album, Live in Belgium on the MaxJazz record label (www.maxjazz.com/).

On September 14 and 15, New Yorkers have an opportunity to catch Dena in action at The Kitano Hotel Jazz Room. Her group consists of a beautiful rhythm section, Mr. Steve Williams on drums and bass master Ben Wolfe. This coming weekend, September 8th & 9th, Seattle’s vocal jazz fans have an opportunity to hear Dena and I together in concert, plus a workshop on Saturday afternoon, as part of Nich Anderson’s Vocal Jazz Series.

This interview was part of JVOICE, a jazz educators series I started on Facebook in 2009 to highlight programs and the educators who are inspiring and changing today’s landscape for young jazz vocalists.

Roseanna Vitro: What is the most important quality for a singer to present in concert or on a recording?

Dena DeRose: I think the most important quality for a singer to present in concert or on a recording is a feeling of sincerity. But, I also feel that a good sense of musicality, a confident, yet, non-ego or diva aura/vibe, and a love for what he or she is doing up there on that stage. When these are achieved, there is more communication between the musicians and audience to help create a positive musical experience for all.

RV: Did you always want to be a musician?

DD: I always knew that I was meant to be a musician. There were times when I thought I should be a basketball player, but knew that I was better at music, so I made the decision in high school to make music my main priority.

RV: Were you a natural musician, playing off the top of your head or were you a studious musician?

DD: I believe I am both a natural musician and a life-long student of music. I started out playing the piano ‘by ear’ before having formal lessons at the age of 3. And, with singing, I had been doing some in pop bands in my teens, but hadn’t had any vocal training until my early 20’s

RV: I know you were a pianist first and foremost, but because of carpal tunnel syndrome and arthritis you began singing after sitting in with a group. How do you feel your experience as a pianist shaped your singing?

DD: Having played piano for many years before making singing a part of what I do, I feel it gave me the musical foundation needed in this day and age of being a jazz singer and provided me with the confidence, discipline, and vision of what it takes to be a vocal musician

RV: Many great natural singers have a difficult time with ear training and theory. As a renowned vocal jazz teacher, what disciplines have you found particularly successful in training student’s ears?

DD: Training the ear is something that I’m continually learning to develop in my teaching. The key is ‘correct repetition’ and routine practicing. Some things that have been successful for me have been:

a) Interval training by using various ‘flashcard’ games I made up, listening to a lot of music

d) listening exercises which enable a singer to recognize chord qualities and chord progressions, the singing of ‘changes’ through tunes (naming chords when singing the roots, naming note names of roots and 3rds, or roots and 7ths, guide tone lines, and arpeggios, etc.)

e) Some students have found that the online ear training websites are helpful, too, and one that I’m familiar with is Music Theory Pro….but I am not too familiar with too many of them.

RV: Do you believe singers should be required to study piano and theory before entering college or conservatory music programs?

DD: I do believe having some basic knowledge of and ability to play a little piano before entering into a university vocal program is needed if you want to get as much as you can out of what is offered. Some people are excepted into jazz programs with not much knowledge of basic theory or piano skills and end up spending their first 2 years or more catching up or trying to keep up.

RV: Do you advocate the use of solfege to learn solos?

DD: I don’t require students to use ‘solfege’ unless they know it well. In the past, I’ve had some Italian students that found it very helpful as they grew up singing with solfege from an early age.

RV: What method do you use to teach young singers how to swing and develop a solid sense of time?

DD: Learning to have a solid sense of time can come from listening to a lot, and I mean a lot, of really great music, and it also grows deeper over time with listening and playing/singing. By working with a metronome, playing with musicians that have great time, and from listening to your ‘inner metronome’, one finds their own sense of time along with having ‘good time’.

I have found that having singers listen to a certain recording like “I Hadn’t Anyone But You” by Sarah Vaughan and singing along with it note for note, nuance by nuance, and not only learning how Sarah sings it, but also learning the horn lines and ensemble figures behind her singing is a great way to work on ‘swinging’ in an ‘audible’ way. For vocalists, Basie and Ellington are also what I ask singers to listen to to work on gaining a ‘swingin’ feeling and the jazz vocabulary in general.

Another thing I’ve found helpful to singers who need to learn to swing is learning to play the drums… If only learning to ‘ride’ the cymbal and keep the hi-hat on 2 & 4. It reeeeeally gives them a sense of the time and swing feel. Once the coordination for drums allows you to also song melodies of tunes, then your learning a lot!! Actually, learning any other instrument helps, too. Some of my students in Graz have taken drums, bass, saxophone, flute, viola, and other various instruments and have learned a great deal about ‘time’ (and pitch, dynamics, rhythmic ideas, phrasing, etc, etc) to apply to their voice.

RV: Do you think that you’ll ever write a book on jazz singing?

DD: Yes, I’ve been in the process of writing a book, but it keeps changing as the years go by….but, soon, I will finish it for the last time and publish it (hopefully by next year!).

RV: Thank you Dena for taking time out to catch us up on your projects, history and teaching. Warm regards for your continued success and happiness.

The Nearness Of Two

A Night in Claremont

Live at Jazz Standard Volume I

A Walk In the Park

I Can See Clearly Now

Depending on how he looks at it, Kenny Garrett’s latest album, Sounds from the Ancestors, has been out for an eternity or an instant. Recorded … END_OF_DOCUMENT_TOKEN_TO_BE_REPLACED

As I delved ever deeper into the 14 albums that document the Larry Goldings/Peter Bernstein/Bill Stewart trio to prepare for our January Zoom conversation, what … END_OF_DOCUMENT_TOKEN_TO_BE_REPLACED

The musical avant-garde is an area where creative people who have earned wisdom through a lifetime of experience can flourish. Wadada Leo Smith, who last … END_OF_DOCUMENT_TOKEN_TO_BE_REPLACED