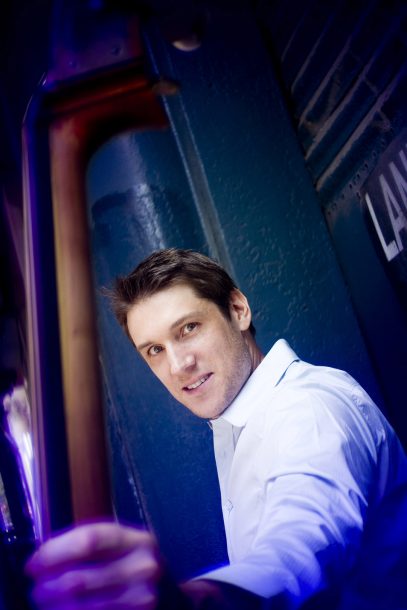 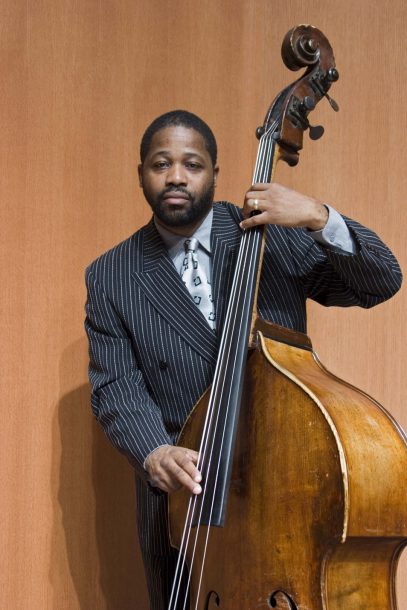 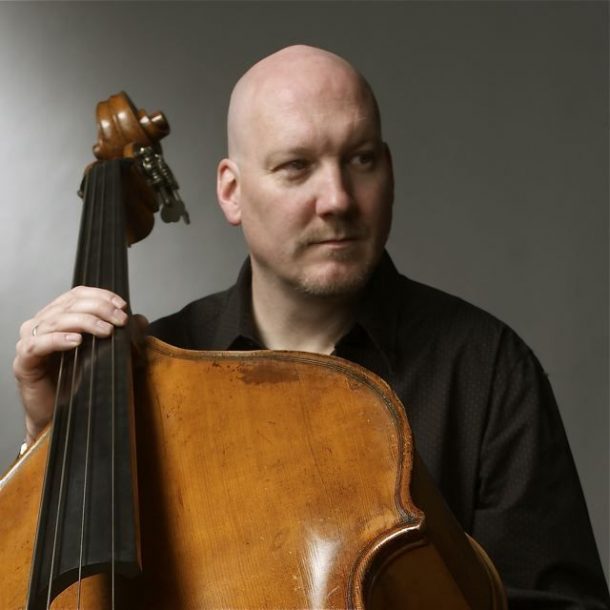 To coincide with his April issue feature on bass giant Dave Holland, Bill Milkowski asked some of jazz’s top bassists to weigh in on Holland’s influence:

Dave Holland has a very rare quality found in musicians these days (exceedingly rare for someone who has been in the business as long as he has). He truly loves what he does. This love is apparent in his music and his personality. From the first time I started touring, Dave has been nothing but gracious with his time and information. The fact that he hasn’t been one to rest on his laurels but continues to create and exact his vision is a testament to his uncompromising commitment to music. As I have entered the phase of recording and leading my own group, he is the benchmark that I aspire to.

His virtuosity on the instrument is unmistakable. Yet this virtuosity is never in the “watch me” fashion you find so prevalent in instrumentalists these days; it’s always in service of the music.

The recordings that most influenced me are:

Conference of the Birds [1972, ECM]: Classic! Enough can’t be said about this record. The melodies and the freedom in which everyone interacts are perfect. Everyone on the record is playing their ass off. The thing that struck me and influenced me most is how Dave has the uncanny ability to interject these independent melodic lines while walking, never losing the momentum. Anyone who claims that the ’70s represents a lapse in the progression of the music needs to look no further than this one.

Gnu High, Kenny Wheeler [ECM, 1975]: This was the first record that exposed me to what is now considered the typical ECM aesthetic. It is a great example of the level of musicality these men were dealing with. The songs are very melodic and deceptively complex. Dave, Jack DeJohnette and Keith Jarrett had such a hook-up. I wish they would play together now.

Dave Holland/Sam Rivers Vol. 1 [I.a.I., 1976]: For me, the benchmark of a great duo record is its ability to make you forget that there are just two people playing. This is one of the all-time great duo records. That Dave and Sam are able to maintain such a highly creative trajectory over the course of songs that are 20 minutes each is phenomenal.

Emerald Tears [ECM, 1977]: I lived with this record for months. It was the first solo bass record I had ever heard. What struck me was the vulnerability. My ultimate goal as an artist is to be as honest as possible and this record is very honest. Beautiful.

Starting with Seeds of Time [ECM, 1984] through his most recent works, I began checking out Dave in the context of his mastery of what are considered odd time signatures. His ability to take a groove (say, in 17/8) and make it feel as if you were listening to it in 4/4 is remarkable.

I have a deep appreciation for what it means to be a bassist/composer/bandleader, and Dave Holland is at the top of his game. His tunes and his playing are deeply intertwined. Each informs and shapes the other. And his ability to keep a band together-touring, recording, doing their thing year after year-is a testament to his creative energy. Lately I’ve been struck by Dave’s presence on the Web (www.daveholland.com). I love that all of his charts are easily accessible on his site. It’s an amazing body of work. I’m also impressed by how connected he is to his fans via social networking, his blog, etc. It shows the mind of a man in motion. He continues to evolve.

Dave is someone who displays integrity in all aspects of life and music, and has consistently influenced the direction of each new form of jazz that he has pursued. Conference of the Birds was the recording of Dave’s that was my first exposure to his writing. I discovered it when I was about 15, after I had been obsessed with Miles Davis’ In a Silent Way. I guess I’ve been listening to him as long as I’ve been playing the bass. But when I heard his compositions and the group’s interaction on Conference of the Birds, it was something completely new to me. Both recordings remain, to this day, two of my all-time favorites. I could go on about all the great music that Dave has made since-with Gateway and Circle and all the incarnations of his trios and quintets.

A primary facet of Dave’s musical approach that has perhaps influenced me the most is his ability to lead a band effectively and to communicate his compositional and improvisational ideas from the bass, in a way that remains open. He is able to create unique forms that draw out the strengths of every member of his ensemble, establishing a space for all the individuals to experiment. At the same time, through his compositions, his interpretation, and through his response to the ideas of the group as a whole, he brings subtle guidance in the improvisational moments. He has the ability to direct the musicians in a way that creates a coherent, unified musical direction.

Dave Holland has been and continues to be a strong influence on my playing. Early in my musical development, I couldn’t help but be impressed by his command of the instrument, the clarity and strength of his time and articulation, and the abundance of musical ideas in his improvisations. As my playing improved, my appreciation of his talents only broadened. More specifically, certain recordings had a big impact on me. Dave’s record Triplicate [ECM, 1988], with his version of Charlie Parker’s “Segment,” imparted great lessons in time playing. The groove that Dave and Jack (DeJohnette) get into on this tune showed me that jazz could “rock.” Dave’s participation on Hank Jones’ record The Oracle showed me another side of his playing. His hook-up with Hank and Billy Higgins demonstrates the traditional side of his playing that sometimes gets overlooked. Also, seeing him on trio gigs with both Joe Henderson’s band and Herbie Hancock’s band was a master class in demonstrating what the bass’ potential could be, how it could anchor the music but also take the music down unsuspected roads.

Ever since I was a teenager, I’ve admired Dave Holland’s musicianship. He’s a very fluid soloist and, of course, a solid bass player. I’ve always admired his leadership and ability to compose. The recording that caught my ear as young developing bassist was an early solo bass album.

to get away from Paul Chambers, Ray Brown and Oscar Pettiford’s style-mainly bebop. Dave was the first bassist to really play the harmonic language of the 1960s from a solo perspective; the pentatonic language of McCoy Tyner, Wayne Shorter, Freddie Hubbard, Herbie Hancock, etc.

For me, Dave Holland has been one of a number of touchstone musicians from whom I have long drawn inspiration. I became aware of Dave somewhat gradually at first, from his playing on Miles Davis’ albums Filles de Kilimanjaro, In a Silent Way and Bitches Brew. The compositions, overall conception, individual playing and group interaction on those records have deeply influenced me. I focused more directly on Dave through his work on a series of albums from the early 1970s that gave his playing more space; those albums include Chick Corea’s The Song of Singing, Paris-Concert by the cooperative quartet Circle, Anthony Braxton’s New York, Fall 1974, and particularly Dave’s own Conference of the Birds.

All of those records saw a lot of airtime around my house for years! Dave’s playing set a high bar for technical facility and flexibility (particularly in terms of speed, pitch accuracy and access to all registers on the bass) and sensitivity in interacting with everyone in the group. He has a personal language that combines melodic richness (highly chromatic lines that are well constructed and make sense) and textural freedom (check out his use of high-register flurries!) with a sense of centrality that honors the intrinsic acoustic characteristics of the instrument and the historical priorities of the bass’ functions (time, harmony, pitch, feel). Feet on the ground, head in the clouds, heart engaged.

Dave has also furnished a model of commitment to continuing one’s musical growth. From solo, duo, trio and quartet settings (with notable colleagues such as Sam Rivers, Kenny Wheeler, Kevin Eubanks, Barre Phillips and Steve Coleman) to big band-both his own and those led by others-Dave has continued exploring and developing as a player and composer to the present day. His open-minded willingness to cross genre lines with integrity is something else that I have long admired (listen to his recordings with Vassar Clements, Norman Blake, Maria Muldaur, etc.). While I am committed to cultivating my own improvisational voice, and although I play a different instrument than Dave (most of the time, that is; he has performed on acoustic bass guitar on occasion), sometimes I find myself in a situation where part of me is thinking, Hmm. … What would Dave do?

When I consider Dave Holland and his influence, what first comes to mind is his artistic integrity and commitment-not only to the bass itself but to music and personal expression in the larger sense. Obviously his groundbreaking efforts as a bandleader-Conference of the Birds and Jumpin’ In [ECM, 1984]-awakened me to the fact that leading an ensemble from the bass was a real possibility, and that the ensemble could be a seamless extension of the language one speaks on the bass. Charles Mingus is the only other bassist I can recall pursuing their band vision with such perseverance and focus. No matter how much confidence you may possess as an individual, role models are essential … and Dave has been one of mine. Originally Published March 8, 2010

Depending on how he looks at it, Kenny Garrett’s latest album, Sounds from the Ancestors, has been out for an eternity or an instant. Recorded … END_OF_DOCUMENT_TOKEN_TO_BE_REPLACED

As I delved ever deeper into the 14 albums that document the Larry Goldings/Peter Bernstein/Bill Stewart trio to prepare for our January Zoom conversation, what … END_OF_DOCUMENT_TOKEN_TO_BE_REPLACED

The musical avant-garde is an area where creative people who have earned wisdom through a lifetime of experience can flourish. Wadada Leo Smith, who last … END_OF_DOCUMENT_TOKEN_TO_BE_REPLACED