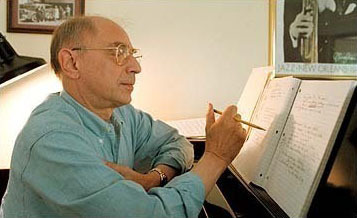 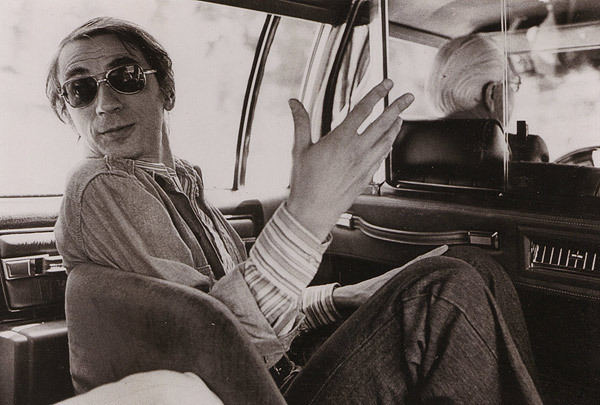 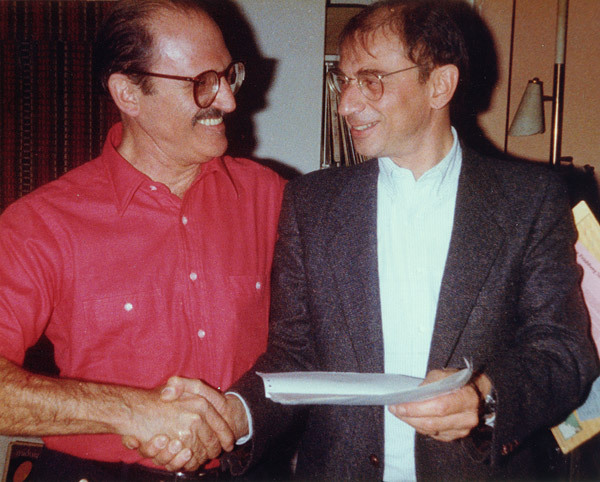 Al Cohn and Dave Frishberg celebrate royalty checks of $17.21each for their song "The Underdog" in 1984 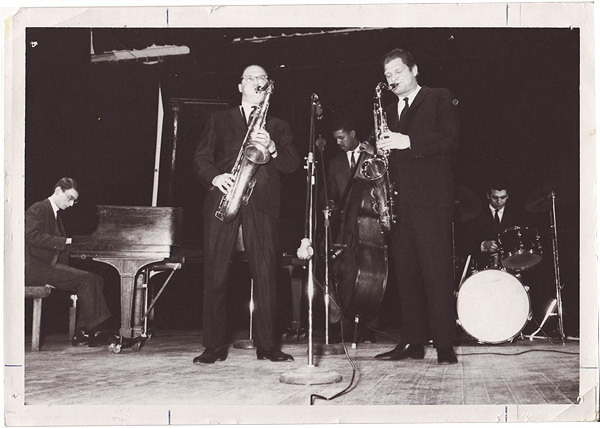 Pianist/songwriter Dave Frishberg has long been a unique voice on the jazz scene. A humorous and sensitive chronicler of our times, Dave is that rarest of talents: a literate, intelligent contemporary lyricist who reveals the human condition in all its joy and melancholy. And oh yes, he also plays great piano. I talked with Dave in his home in Portland, Oregon in 2007.

What follows is an excerpt from our conversation that was aired on my Judy Carmichael’s Jazz Inspired radio show in 2007.

Do you think of yourself first as a singer/songwriter or as a pianist?

Had you sung growing up? People ask me constantly if I sing. If you’re a pianist, especially if you’re a female pianist, they assume you sing. Before you were singing did people always ask you if you sang?

No, not really. People always ask me if I give lessons.

Well, they do ask us all the same questions. You started writing before you were singing, so you weren’t thinking of writing for yourself.

No, it was the farthest thing from my mind.

Talk about that evolution.

I just became interested in songs. Songs are one of the things that attracted me to become a pianist. I just loved the songs. I wasn’t crazy about learning to be a classical player. I never did study that realm at all. I liked songs. I liked pop songs. It came easy to me to play the piano.

I was thinking about your focus in writing songs, because you said that you always liked pop songs, but you’re talking about pop songs of another day. You’re talking about what we call standards now. Loving those songs and getting drawn into the idea of writing lyrics and songs like that. Talk about that evolution.

One thing that’s important to remember is that when I started to get into professional piano playing business, looking for jobs, the biggest credential you had to present was your repertoire. The idea was you had to know a million songs. Do you know all the songs? And the songs meant every song that ever was. That was the deal. That was always one of my goals as a beginning pianist-the learning of the material. Learn songs and then you can get gigs. That’s number one.

Number two, when I got to New York, as a professional player, most of my gigs were with singers, with appointments, rehearsing singers, preparing them for their auditions, helping them learn material, stuff like that. That got me acquainted with a lot of sheet music and also with a whole repertoire of songs that I had never considered before, because they weren’t necessarily jazz vehicles that were interesting to me in an instrumental way. I began to hear all these songs and I began to realize that some of them were better than others. Then I began to pay attention to which composers I liked and what I liked about them. And then I began to feel that I could take a crack at this. I thought I could do it. That’s how I began to get interested in writing songs. Just by virtue of navigating through my repertoire.

The actual leap to singing though is a huge one. I’ve been thinking about that lately. I think as jazz musicians we’ve seen and heard so many bad singers and good ones too, I think it makes it even more daunting for us to dive into singing.

Daunting is right. Except when I dived into singing, it was in a very confidential way. I think I dived into singing because I started writing. Instead of handing my songs to anonymous demo singers to try to get them to publishers, I would have to make the demos myself, because I knew how they were supposed to go. That’s when I began to sing my own songs. That’s when I began to take courage in the fact that my voice could do it. I never bothered to learn how. It was never my intention. But I had worked with a lot of singers. I’d been around singers. And then I sing around the house.

What have you learned from singers? What would be the biggest thing you’ve learned, in terms of your own singing, because you have such a distinctive style.

I don’t know what I’ve learned from singers as a group. I know that musician singers have always appealed to me. Like Bob Dorough, for instance. Or Nat Cole, for another example. I like the way musicians handle vocals. I guess I like the way jazz musicians handled vocals. That’s what appealed to me Fred Astaire’s voice always appealed to me. I’ve always enjoyed that conversational way of singing that musicians have. Also I like the way they handle rhythm and time. So that’s what influenced me in singing. I have no idea what I’m doing. I took a few lessons with a guy years ago and I made a tape of it. And I’ve been using that tape to warm up on for 30 years. That’s what I warm up on. Just that tape in a hotel room. I know that I’m not still singing correctly. My voice is disappearing as I grow older. I’m able to hold notes not for so long as I used to. I run out of breath quicker. There’s a huskiness and a deepness to my voice that didn’t used to be there. I haven’t really paid much attention to that. As far as singers who impressed me vocally, I’d have to say Barbara Cook. She absolutely kills me. Every time I hear her, I have to wonder who’s that?

And you’re a Peggy Lee fan.

Peggy Lee is to me the acme of pop singers. I just loved her whole attitude. It was obvious when I heard her sing that she prepared a way to do it. I loved the attitude she brought to it. It was always understated. She’s one of the very few understated jazz singers if you stop and think about it. I always enjoyed that about her. Also the economy of her posturing or her stage presence always knocked me out. She didn’t have to do anything except move her wrists. She didn’t do any rhythmic movements. It was very interesting. She seemed very very in control of what she was doing, yet lost in the material. Number two, her time. She had a wonderful jazz feeling. A great jazz feeling.

You also mentioned Bob Dorough, when I asked about your favorites.

See Bob Dorough is unique. Nothing like him has ever been seen before. He’s a big influence on my whole life, really. It’s interesting to think of the musicians who have been very influential on my life in subtle ways, Bob Dorough and Al Cohn. And I know that I’m not alone and that you will find a lot of people in our musician’s world drop the same names or will say the same type of thing I’m saying. It’s not just me who says these things. Bob was an example to me musically. He’s so musically gifted. One of the freaks I’ve met. He’s a real musically gifted freak. He’s also a very thorough musician and a conscientious musician. He doesn’t know how to write a cheap note. Or play a cheap note. Anyway, I think everything about him musically is exemplary.

I’ve always admired how industrious he is and how ingenious he is. Also, he’s a very spiritual character, outside of his music. He affects people in that way too. There’s a magic about Bob that you gotta go for. To me, he’s a guy who says yes to l ife. Speaking as a guy who says no to life, as I am, it’s something I look at with much awe and respect.

What about Al Cohn?

When I got to New York and began to meet musicians in the big leagues, people who I had been following since I was a kid reading Downbeat. I was meeting all these people. I was always curious about Al Cohn, because all the saxophone players in Downbeat when asked who their favorites were, Al Cohn’s name would always be included. I couldn’t figure it out why. Why is he such a big star? When I finally met him, and began to work with him and play with him and began to be associated with him. I was hooked too. They called him Mr. Music. That was a perfect way to express it. The music just radiated out of him. If he came into the room, even if he didn’t have his horn with him, the band played better.

Personally, he was such a great person. Such a generous and warm person. And funny. And intelligent. I was honored to even know him. To be in his company was always a pleasure. He always said the right thing and did the right thing. And he was a model to me of how an artist should conduct himself or comport himself, while drinking quite a bit of scotch each day. You couldn’t tell.

Are you working on anything in particular now?

Yea, but nothing musical. I have been working at my computer writing memoirs, I guess you’d call it. Not in any chronological way, but just writing down things that I’ve thought about or that have happened to me or about people I used to know. Mostly it’s about long ago. I’m not interested in writing about the past, I guess it’s just too painful, for many reasons, I don’t know. I don’t have much to say about it in public. But I really want my kids, for instance, to get a feeling of the world I once lived in. Back in New York and LA, back when I was in the swim of the music and jazz business. So that’s what I’ve been working on and I kind of enjoy that. And I’m a tinkerer. So I go back and edit and edit and edit, again and again and again what I’ve written. A lot of what I’m doing is going back. Like yesterday, I spent three or four hours going over stuff that I had written in 2001, going back and rewriting and editing it.

Will you publish this?

I don’t know, maybe I’ll publish it on a web page or something, if I ever get around to getting one. [He did and you can view his writing there.] I’d love to see it published just for my own vanity. But I don’t know if any publisher would be interested in that really.

You write so beautifully. Of the many things I love about your writing, there is the humor but also the poignancy and the melancholy and all of the different emotions coming together.

You’re talking about the lyric writing.

Isn’t that true? We’re so lucky.

The travel. The people we meet. We get to go into a town as a musician, not as a tourist, so immediately we connect in a different way. I’m thinking I for one as a fan would love to read your perspective on that and your musings on what your life has been to this point. Somebody who can really articulate because a lot of people can’t. They’re not good at expressing that. So I’m here to say, keep writing.

Thank you, Judy. There’s nothing I like better than talking about myself.

To listen to the entire conversation with Dave Frishberg, along with his music and the music that influenced him, or to hear interviews with other notable people inspired by jazz, go to Judy Carmichael’s Jazz Inspired web site.