Skip to content
Become a member and get exclusive access to articles, live sessions and more!
Start Your Free Trial
Home > Features > Cyrille Aimée: Voice of a New Generation in Vocal Jazz 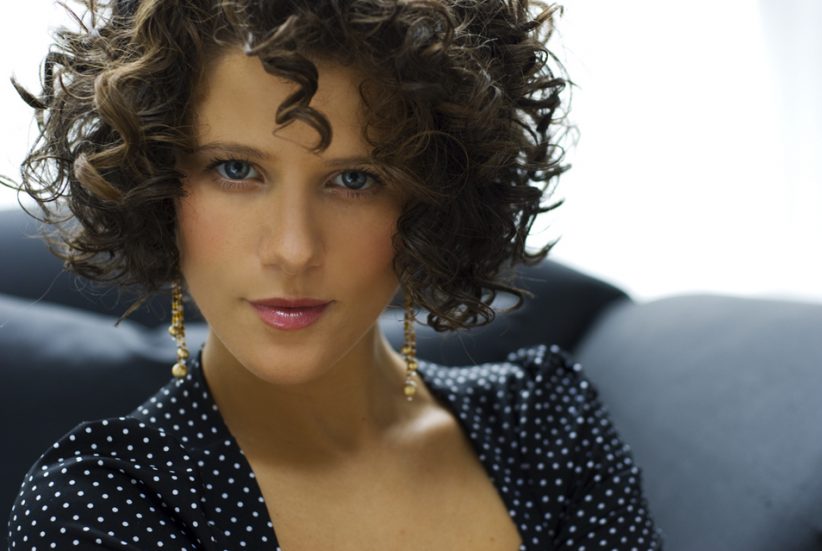 When you see Cyrille Aimée perform, you instantly fall in love with her-her voice, eyes, curls and the joyful spirit she invests in each song.

In 2010 I was asked to help select 12 singers out of 240, all budding jazz vocalists vying for honors in Thelonious Monk Vocal Competition. Allan Harris and Peter Eldridge were my fellow judges, along with producer Jeffrey Levenson. The first entry we heard rocked us, totally captured our imaginations. Unbeknownst to us at the time (it was an anonymous audition), Cyrille was the opening vocalist and she set the bar high for all subsequent entrants.

I attended the finals in Washington, DC., watching the talented finalists closely from the wings of the Kennedy Center. Cyrille charmed the judges with her warm reads and storytelling; she showed hip scat singing and a warm personality, tied together with the air of a chanteuse pixie. She did not win the Competition (Cécile McLorin Salvant did, with Charnee Wade capturing second place), but she raised eyebrows. Soon thereafter I began to see her performing in New York, making her way from Small’s Jazz Club through Dizzy’s Club Coca Colaand now enjoying a residency at Birdland.

Fast forward to 2012 and the vocal jazz world welcomed a new vocal competition conceived and facilitated by a successful union of jazz stalwarts: Larry Rosen (JAZZ ROOTS), John Schreiber (The New Jersey Performing Arts Center) (NJPAC) and WBGO radio, all teaming with Indaba Music to create a new, Sarah Vaughan International Vocal Competition. Over 900 singers world-wide entered. Once again I had the opportunity to judge a very talented group of singers. The winner of the competition was Ms. Cyrille Aimée.

My own experience teaching vocal jazz at NJPAC’s, Jazz for Teens program tells me the future of jazz vocals is in good hands. Cyrille is a perfect example of that. Recently she took the time to share her thoughts with me. I was delighted to learn more about her.

Roseanna Vitro: What are your earliest memories of music growing up as a little girl in France?

Cyrille Aimée: As a little girl, there was always music playing in the house. My father loves classical music and my mother, who is from The Dominican Republic, would play a lot of salsa for us to dance to. But what changed my life was meeting the gypsies. I grew up in the little town where Django Reinhardt used to live; Samois, in France. Every year there is a Django Festival there and gypsies from all across Europe come to honor him. I fell in love with the gypsies culture, their way of life, their freedom and especially, their music and the way they live it. One gypsy gave me a guitar and started teaching me the gypsy rhythms and in exchange I taught him how to read. Then one day his brother, who was a virtuoso guitarist, asked me to learn a song called “Sweet Sue” and sing it in front of the whole family. Ever since that day the gypsies called me “Sweet Sue”!

Did you study music in your early years in school and were there any teachers or family members who inspired you to pursue music?

I’ve lived in many different countries in my life and I’ve always tried to enroll in some music classes wherever I was. I think where I learned the most about jazz was when I came to NY and studied at SUNY Purchase College. I was the only singer there and studying with a bunch of instrumentalists was really great.

Were you a disciplined student or do you consider yourself simply a natural musician?

I am definitely not very disciplined. I don’t recall ever warming my voice up by singing scales and all that! I get bored! To me, the best way to keep growing is to sing as much as possible. I love the voice because you can take it anywhere; I think it is a very natural instrument. I guess I am more an “ear” musician. To me it is natural, it’s just a way of living.

What age did you start performing?

My first stage was at the Django festival in front of 3000 people. I was fourteen and I was terrified!!! I was invited to sing a couple tunes with a guitar teacher of mine. After the thrill I felt there, I knew I needed more!

What was your inspiration to move from France to the United States to study music at Purchase College (SUNY) The State University of New York?

Before moving to the US I was living in the Dominican Republic. I moved there to work with a piano player and learned a lot about life there. I started singing everywhere and every night. I was basically the only jazz singer on the island, so it was too easy. I wanted a challenge. I wanted to meet new jazz musicians who I could learn from. I wanted to be at the heart of it all, and that’s why I moved to NY! I chose SUNY Purchase because it was close to Manhattan, and cheaper than most schools.

I first became aware of your talent when you were a finalist for the Monk Competition in 2010. Can you describe how that experience has helped you?

That helped me in so many ways. Musically I learned a lot from it. Like I said, I love challenges, they push me to do better. Singing in front of a judge panel like that is an insane amount of pressure, and sometimes that’s really good for creation!

What advice would you give to other young and aspiring jazz vocalists? Are there any books or programs you would like to recommend?

My first advice would be that if this is what you want to do, then believe in it. This art requires all your attention and energy and you should dedicate yourself to it. The other advice I would give is to listen to as much music as possible. Every thing will inspire you and open your ears more. My last advice was given to me by Bobby McFerrin, which is to sing as much as possible, all the time! In the shower, at the grocery store… anywhere!

How did you feel winning the first Sarah Vaughan Vocal Jazz Competition at NJPAC (The New Jersey Performing Arts Center) this past year, in 2012?

It was really an incredible experience. I like rehearsing with the amazing band they had at our disposition, and meeting the other contestants. I like the vibe we’re all in, the level of concentration, and at the same time, the happiness everyone feels for being there. I was really honored to win first place in the competition as the level of musicianship amongst the other singers was very high. It was not easy!

What are your aspirations for the future?

I have put together a new band and right now I am pouring all my energy into this project. We recently performed for a week at Birdland (NYC) together and are going into the studio this month for a 2014 release. The band is really fun. I went back to my roots for this project and have a gypsy guitarist, Adrien Moignard, a jazz guitarist, Michael Valeanu and a brazilian guitarist, Guilherme Monteiro, on the record. These three guitars have very different sounds and blend together really nicely with the two australians, Sam Anning on the bass and Rajiv Jayaweera on the drums. This record will be different from my previous ones with a lot more original material.

I’d like to thank Cyrille for taking the time for our interview. For more information go to her website.

As the lights dim, a dog wags its tail as it looks up at its master, a tall, clean-cut man whose silhouette fills the doorway … END_OF_DOCUMENT_TOKEN_TO_BE_REPLACED

Depending on how he looks at it, Kenny Garrett’s latest album, Sounds from the Ancestors, has been out for an eternity or an instant. Recorded … END_OF_DOCUMENT_TOKEN_TO_BE_REPLACED