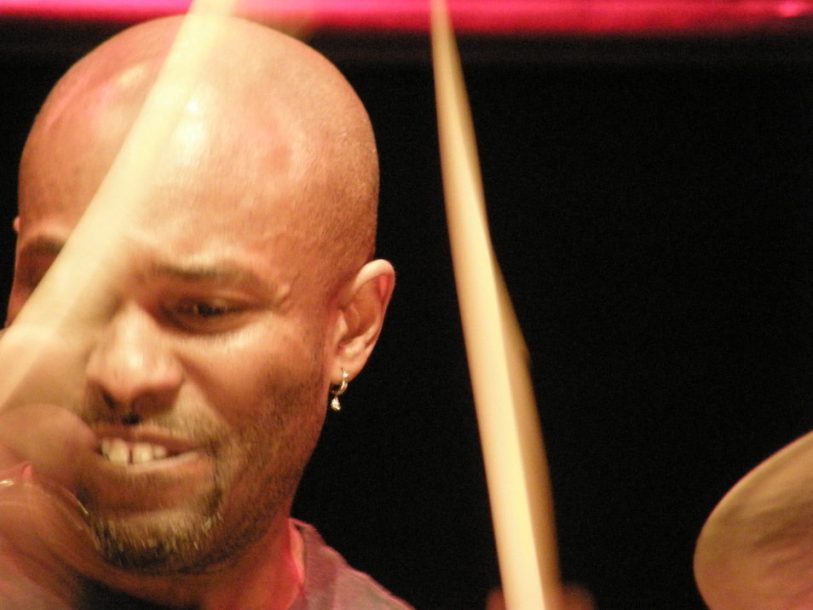 Clarence Penn talks to Grażyna Studzińska-Cavour about his music, playing in Poland and future plans, before the set of his two different concerts at Palm Jazz Festival in Gliwice 7th October 2010

GSC: Nice to meet you in Poland, Clarence, welcome to my home city.

CP: Yeah, Nice to meet you, it’s nice to be back here!

GSC: Back. So you are here frequently?

CP: I wouldn’t say “frequently” but I was here probably the last three or four years in a row. I played here last year with two Polish musicians.

GSC: Tell me something about Polish people you played with. I know about Grzywacz, about Lemańczyk, how is it that you play with Polish musicians?

CP: You mean how do I like playing or…?

GSC: How do you like and how did it happen that you started the co-operation.

CP: I think Maciek (Grzywacz) and Piotr (Lemańczyk) they heard me play on mini records and Maciek, I think when he was trying to decide what kind of project to make, he thought of me because I played so many different styles. He just didn’t want to play only one style, he wanted to be able to play different types of music. So he contacted me and sent me some recordings of him playing, and when I heard this… “wow! These guy’s a nice player!”. I didn’t know him as a person but when I came to Poland both of the guys really took care of me. They were very sympathetic, and showed very big hearts. And by the fact that we toured around Poland I got a chance to see the real inside of the country. Normally when jazz musicians come to Poland they go to Warsaw or Katowice, they go to the big cities but I was really, really in small, deep Poland.

GSC: And obviously you liked the Polish audience…

CP: I did, I did! Every audience was amazing! Everyone really looked at the band and enjoyed the music, clapped and was very energetic. That made us play better because when we play something we feel the energy from the audience. It makes us play the best we can. So I had very good experience when I was in Poland. You have good food, pierogis and borshtch… I love, I love them. I don’t like beets, and Maciek’s wife made some borshtch… I was like: “I don’t want” but they insisted “please, try” and it was really good! So I was converted.

GSC: I like asking musicians one common question: what made you a jazz musician, are you from a musical family or just something forced you to music? Maybe it was it just inside…?

CP: I think it was inside. My mother or father… no one in my family is actually a musician. A neighbor, the guy that lived very close to my house, he played drums. And that’s how I heard drums and said to myself “wow! I think I’d like to play drums!” you know. But actually before that I played trumpet for like… two days… but it really hurt, you know, it was a lot of pain (showing his cheeks). And then I heard my neighbor play drums and I asked my parents for a set.

GSC: But anyway it’s just hard, everyday training, you must train a lot…

CP: I think so, yeah, you do have to put a lot of time in it. Especially for the style that I play because I try to approach to drums from a classical foundation. Most drummers play like in rock’n’roll and…

GSC: You are very soft…

CP: Yeah, I think that the drums are beautiful and I want to show to the people that drums can be beautiful. I don’t have to play everything so loudly for you to understand.

GSC: …you played with Christian McBride and these are completely different styles, will you tell me why you take such different projects?

CP: Well, I think in general I love all kinds of music. As long as the musicians are good I’m willing to learn and to play any style. I’ve always been into it. I’m from Detroit originally so in Detroit that is a lot of jazz, a lot of R’n’B, there’s a lot of classical music, there’s a lot of rock… So I was listening to all of those different styles and I figured if I’m playing drums I shouldn’t limit myself to just one style. And all of these guys were my heroes, I wanted to play with them and I just feel that we could communicate together and I feel that also if I have different styles to chose from them, it gives me the opportunity to work with many people, you know? Different people. I play with Richard Galliano, we play the music of Piazzola of more classical base, Makoto Ozone…

GSC: You told me about your music heroes in general and what about the drumming heroes, about people who had influence on you… I don’t know… maybe Nippy Noya or Trilok Gurtu, who was here two days before…

CP: Oh, yes! Trilok is amazing percussionist and drummer! But one of my favourite drummers while growing up (when I learnt about jazz) was Philly Joe Jones. And Tony Williams. And then I discovered Elvin Jones, then I discovered Louis Hayes then I discovered Ben Riley, then I discovered… The list went on but Philly Joe Jones I think and Tony Williams and Elvin… for me that was a very unique combination of guys to try to emulate in the beginning. Philly Joe had amazing technique, a lot of showman chic, power and yet the very natural, organic quality about playing drums. And then Tony Williams just really had very modern ideas and he wasn’t afraid to try them on stage. He was so young when he was playing with Miles Davis, yet, you know, at the time Philly Joe was playing and Elvin… It’s very difficult not to want to play like them when you are young kid and Tony Williams was 16 years old playing with Miles! But he had his own style so for me that was important. He gave me the confidence to try my own style.

GSC: You also started to play as a young kid with adults as far as I know. That must have been also full of courage and individualism.

GSC: Here at Palm Jazz you are taking part in two projects which differ in style, will you tell me how different they are.

CP: Well, the first part with Fima Ephron as the bass player: he is concentrating, well… dedicating the whole show to Monk. It’s great because one of the drummers, Frankie Dunlop, for me was one of the best drummers to play with Monk. This guy really understood Monk’s music. And in Monk’s music in general there is a lot of space I love… So this drummer, Franky Dunlop, played this spacy way and he was a big influence on me also. So when Fima said “I wanna play the music of Monk I said “wow! It’s great!” because I can remember myself when I was a child being influenced by this drummer. So tonight I’ll be able to play somebody’s ideas that I remember playing. And then the second half with Adam (Rogers) is very very different. Adam writes very difficult music. But I feel that it’s my job to make it understood easier.

CP: Yes, readable and listenable because if I played it exactly like it’s written then it’s gonna sound very scientific and nothing about me is scientific. [laugh] I’m really a natural type of person. With Adam’s approach to his music I’m gonna approach it my way. But the thing about Adam that I do like or I love is that he’s influenced by a lot of classical music also so we have some things that we play like classical. He also has some Brasilian influence, I love Brasilian music. We have the modern jazz, we have some staff like Coltrane… so it’s a group which has a lot of very different styles within the group so that’s why I really like being a part of it.

GSC: You say about Brasilian influence and your CD Saomaye is full of African music so you seem to like making the ethnic background.

CP: Yeah, I do. My new CD which shall hopefully be out in next six months or so, is like continuation of Saomaye so I’m blending still the African music with flamenco music and actually I’m singing more on that record, I’m playing more percussion… I think for some reason African music you can really feel. It feels like the earth, feels like it was very groundy and I try to sneak, you know, put it in every situation that I play.

GSC: That is exactly the same what Trilok Gurtu said. He also puts a lot of African music to his projects. With Angelique Kidjo for example.

GSC: But you play with sticks with brushes and very softly, and this is… Palm Jazz… You are going to play with your palms, don’t you?

CP: I am tonight! (laugh) So watch me! Watch the concert, I’ll play for you!

CP: You know, because actually you said that, one of another heroes of mine, a guy named Papa Jo Jones, very famous drummer, he played with his hands a lot, but a lot of drummers these days don’t play with their hands so actually there is a song tonight that I play with Adam, that I put a lot of my hands to. So… (laugh).

GSC: And tell me: in five years time what do you plan to do, do you know where you will be in music and life?

CP: I don’t know where I will be but I hope to have my group working more in touring around the world and bringing my music to different audiences in the world. Also just, you know, bringing further awareness of the beauty of the drums. Cause I think there are a lot of amazing drummers that really can show the power and the complexity of the drums but not so many drummers bringing the soft elements. Naturally that’s the way I play. So in five years I want to be able to tour around and bring this music to people.

GSC: So please, make the music more popular because it is not as popular as it was in seventies.

CP: Exactly, I feel that, yes.

GSC: Thank you very much for your time.

CP: Oh, thank you. I appreciate and hope you’ll see the concerts tonight.

GSC: I will be there!

Depending on how he looks at it, Kenny Garrett’s latest album, Sounds from the Ancestors, has been out for an eternity or an instant. Recorded … END_OF_DOCUMENT_TOKEN_TO_BE_REPLACED

As I delved ever deeper into the 14 albums that document the Larry Goldings/Peter Bernstein/Bill Stewart trio to prepare for our January Zoom conversation, what … END_OF_DOCUMENT_TOKEN_TO_BE_REPLACED

The musical avant-garde is an area where creative people who have earned wisdom through a lifetime of experience can flourish. Wadada Leo Smith, who last … END_OF_DOCUMENT_TOKEN_TO_BE_REPLACED

Wisconsin-born and proud: For all of the avant-everything complexity Ethan Iverson has applied to his solo projects or the sounds he created in his role … END_OF_DOCUMENT_TOKEN_TO_BE_REPLACED