Skip to content
Become a member and get exclusive access to articles, live sessions and more!
Start Your Free Trial
Home > Features > Catching Up With Trumpeter Jorge Vistel 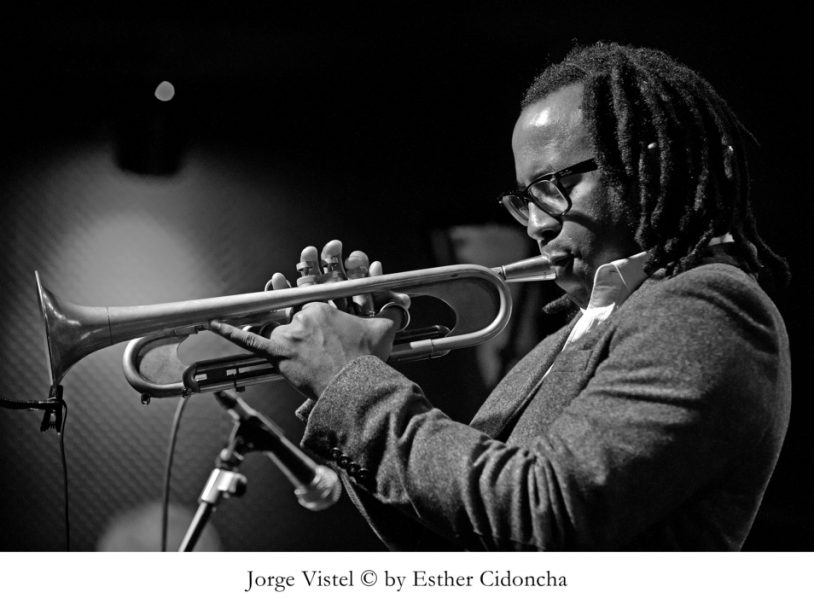 The Cuban trumpet player Jorge Vistel has distinguished himself as one of the most personal voices on the European jazz scene. His music is linked to tradition but his inquisitiveness has led to a very contemporary style. His latest album, Cimarrón (Inner Circle, 2014), was recorded in a trio format with bassist Reiner Elizarde and drummer Michael Olivera.

Currently living in Madrid, Vistel has had a prolific career as a leader but has also established himself as an in-demand sideman for great musicians during their European tours, including Roy Hargrove, David Murray, Benny Golson, Henry Cole and Marcus Printup, among others.

What is the story behind the music on Cimarrón?

As its name implies, Cimarrón is a slave who escaped and fought to follow his goal: reaching freedom. This album was created with this spirit, having a personal goal as my artistic evolution. |

Does the concept shape the writing of the music?

Of course, they complement each other. Music is shaped by the ideas that give rise to the compositions I’ll develop afterwards.

What influences shape your style?

I think style is fundamental. It is really important having a personal playing style. Mine is shaped by traditional influences, combined with my Afro-Cuban roots and inspired by the avant-garde jazz stream.

There is a lack of harmony in this music. Why?

It’s not necessary. In this case, the album is based on the Yoruba religion, in which the singing was accompanied by three drums. These drums are reflected in each musician of the trio. While creating polyrhythm the harmony is not essential.

Each musician follows a different rhythm line that combined together results in a whole. A clear example would be the fourth tune of the album, “Rancheador.”

How did you come to record for the Inner Circle Music label?

This opportunity came through Greg Osby, who I met in Poland while touring with David Murray. As a label director, Greg offered me to be part of his catalog, which was really attractive to me. It is really valuable that someone who has already travelled this path gives support to the new generations, which are bringing new fresh ideas to the music panorama. Greg, besides being one of the most innovative and prestigious musicians of the contemporary jazz scene, is helping many young talented musicians, something that no doubt honors him.

You are working on a new album. Will you continue with the same idea or will it represent a change?

I’ll keep going along the same line, based on the Afro-Cuban culture. The difference will be the approach to the music, as this time it will include a harmonic instrument, a piano. But both of them will share spirituality and rhythm.

Have you already planned the recording?

It is planned for this year. It will be recorded in Madrid and it launched by Fresh Sound Records. I am still setting up the band, as it will be an international quartet-trumpet, piano, bass and drums-so we need to match their agendas in order to confirm they can be in it.

What do you think Cuban musicians represent in the jazz world?

Cuban musicians have played a really important role since the beginning of jazz because of the proximity between Cuba and the U.S., among other things. The Cuban traditional music has much to do with jazz; we just need to pay attention to how many boleros have become jazz standards. Mario Bauzá, Chico O´Farrill, Chano Pozo and Machito are just few names that have made history by launching Latin-jazz music.

Which are your objectives for this year?

To continue with Cimarrón presentations, launching my next album in a quartet format and also to keep developing my playing.

Depending on how he looks at it, Kenny Garrett’s latest album, Sounds from the Ancestors, has been out for an eternity or an instant. Recorded … END_OF_DOCUMENT_TOKEN_TO_BE_REPLACED

As I delved ever deeper into the 14 albums that document the Larry Goldings/Peter Bernstein/Bill Stewart trio to prepare for our January Zoom conversation, what … END_OF_DOCUMENT_TOKEN_TO_BE_REPLACED

The musical avant-garde is an area where creative people who have earned wisdom through a lifetime of experience can flourish. Wadada Leo Smith, who last … END_OF_DOCUMENT_TOKEN_TO_BE_REPLACED

Wisconsin-born and proud: For all of the avant-everything complexity Ethan Iverson has applied to his solo projects or the sounds he created in his role … END_OF_DOCUMENT_TOKEN_TO_BE_REPLACED