Skip to content
Become a member and get exclusive access to articles, live sessions and more!
Start Your Free Trial
Home > Features > Carol Duboc: Passionate About the Music 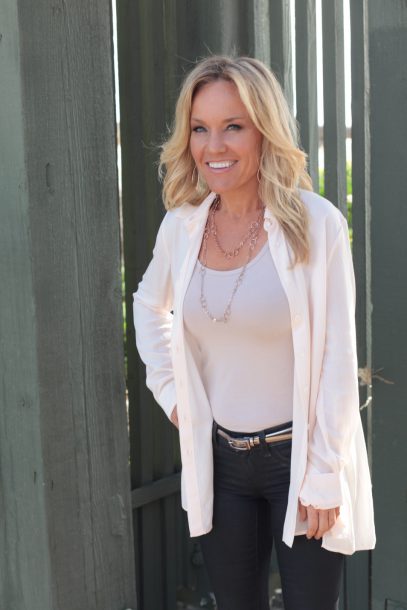 The sultry singer and songwriter Carol Dubuc has a lot to offer on her latest release, Smile, on her sixth Gold Note Recording, which features contemporary jazz greats, Jeff Lorber and Hubert Laws. Duboc’s strong, creative writing talent has propelled her as a songwriter for top pop/R&B artists such as Patti Labelle, Chante Moore, Stephanie Mills and Jade.

Recently, I had a wonderful conversation with the singer to discuss her career and hot new release, Smile, which is a “must hear!” It is everything you’ll want in an album.

Carol Duboc: Well my dad… not by profession was a drummer and piano player, and my mom was a concert pianist and taught piano. My grandfather on the other side was an opera singer and his wife was a prima ballerina of the Chicago Opera Company, back in the…I don’t know when it was, maybe the ’20’s or ’30’s or something…but we had a musical family, all different styles. My dad loves jazz, he used to listen to Lionel Hampton records and he still has a set of vibes in his home…just a lot of music growing up.

Gigi: That explains a lot about you and your background, very impressive. When did you discover that your voice was your best instrument?

Carol: Well, it just kind of evolved; I used to do musicals as a young kid and I ended up going to USC as an opera major, but it was really because I liked singing and not so much opera…that’s what they were offering at the time; they didn’t have a jazz program. So, I always did musicals and always sang in a band in high school. Actually, I played bass in my band in high school. In order to be a musician, it’s a different mind-set in that you have to be very, very disciplined. I apply myself and work very hard, but being detailed and disciplined is what musicians do. I am good musician, but the best musicians can repeat and repeat and repeat until their fingers get comfortable; I didn’t have that kind of discipline, but I do write for all of the instruments.

Gigi: I read that you wrote and arranged for your musicians. I just want to say that…and you know this…arrangements in music have everything to do with how the music will and sound and how it will come across to the listener.

Gigi: To me arrangements make or break a song, they can either destroy it or make the song beautiful. You have done a lot of work with artists such as Patti LaBelle, Jade and so many other people. What makes you such a great writer and arranger?

Carol: I think writing is something you naturally do and on this particular album with Jeff Lorber, he did a lot of the musical arrangements; just by the nature of how we write together, often he has a lot of it done. On the other songs you’re talking about with Chante Moore, I kind of hear how I want things to go and how I think they should go together and I guess…if someone else can do it as well or better, then I’m happy to have them do it. [laughs]

Carol: In the case of Jeff, we hear so much alike that it’s just really great. He does stuff the way I would want to do and the way I would want to do it; so I didn’t have to do as much on the album. In other cases it is a part of what I like to do, I like arranging the horns, I haven’t done it in a while, but I really do vocals and strings. Back in college, I did minor in composition, because I liked writing for various instruments and I think it’s just kind of in my head.

Gigi: I’m going back a little bit, at least to the vocal part of your music. Which female vocalist did you learn from in order to create the sound of Carol Duboc?

Carol: You know…. females…I don’t know if I pulled from her or not, but I really like Ella Fitzgerald, because I like the tone of her voice; improvisation. I don’t do exactly what she did and I’ll never be that great, I like her a lot. Al Jarreau has probably been more influential than anybody…

Carol: Yes, because he does R&B, pop and jazz all mixed together and improvises…I don’t sound like him, but that’s just kind of the approach I like to take. Also, Deniece Williams, when I was very young I was introduced to the head of MCA and that’s how I got my start. I guess that’s how I ended up writing for Chante Moore. Anyway when I was singing, people noticed that my vocal timbre was like Deniece’s, so I did a cover of “Free”. I got exposed to…I mean I’ve always loved Earth, Wind & Fire, but I got exposed to what Maurice did with Deniece, which would be a dream to be able to do that kind of album…what she did on This Is Niecy; she’s singing like a horn and I’m sure a lot of that was influenced by Maurice White.

I think song writing is a big part of what motivates me… composition. I really think more like a composer than a singer, I think.

Gigi: Before we talk about your new release, Smile, I want to make mention of your acting role as the character “Pumkin” in the 2005 major motion picture Be Cool, with John Travolta, Uma Thurman, Danny DeVito, The Rock and so many other great actors. How did you get an offer to play a role in the movie?

Carol: It was really funny. The girl that works with me at my company is also in casting and her close friend was casting that movie and they apparently were looking for this exact person, who was kind of soulful and whatever…a certain size and dimension. They went through something like 3,000 people and my friend thought ‘I wonder if Carol would like to try out for this’. I said “Sure! Why not?” [laughs]. I went there and sang “Lady Marmalade,” which was interesting, because I had already worked with Patti LaBelle anyway and so I guess it was the right thing. It was really fun! Apparently, I don’t do a lot of movies, that’s not been my focus, but it was a really fun experience. They treated us great…it was a small part, but I had Vince Vaughn’s arm around me for twelve hours, because it takes a long time to shoot those little scenes. John Travolta was there until four in the morning; he’s a really nice person. The Rock is a super nice guy.

Gigi: Do you think you will ever do anything like that again?

Carol: Sure! If it drops in my lap like that again, I certainly would, play a jazz singer or something. We tossed around the idea of people I could play, but it’s just a whole different world and it certainly is fun.

Gigi: I wanted to acknowledge your performance. It is not often that a jazz singer has the opportunity to appear in a movie. I can count on my hands how many jazz musicians have appeared in movies.

I want to talk about your new release, Smile and your work with Jeff Lorber; tell me about the chemistry between the two of you and why it is that you work so well together.

Carol: Well, I was thinking about it the other night when we were doing a show, when I first started writing music I started writing jazz fusion type stuff, I didn’t know why I was doing it; I was really young. I would write for all of the instruments, all of the parts down, before I knew all of these great musicians where you don’t have to write all of their parts down. People described the songs I was writing as Chick Corea meets Beethoven, so I think originally that’s the kind of music I’m influenced by. As a singer I love Marvin Gaye; and who doesn’t love Stevie Wonder? So, I think it’s just that our influences are similar and that I really am passionate about that kind of music and he does it. It’s such a blessing!

Gigi: Jeff Lorber is on keyboards on this album, you also have Tim Carmon on piano; Vinnie Colaiuta, drums; Michael Thompson, guitar; Brian Bromberg, upright bass; Jimmy Haslip, electric bass; Luis Conte, percussion; and the legendary flautist, Hubert Laws. What a collaboration of musicians! This isn’t the first time Hubert Laws has appeared on your recordings; tell me about that your work with him.

Carol: No. It’s interesting because I used to use sax for a long time, Gerald Albright, I’ve known him for a long time and the flute really goes with my voice. I just wanted flute on one song, but after hearing Hubert play I wanted flute on everything! He’s just so great! I am so fortunate that he did it for me and he’s shown up on every album so far.

Gigi: Well, I must say your voice works well with the flute. You fall in sync with Hubert when you are singing with his playing. It is a beautiful sound to hear.

What made you entitle the album Smile?

Carol: Well the whole album started during a difficult time in my life…my relationship and it took about a year and a half to write, we really didn’t even know we were writing an album in the beginning. Once I wrote Smile, it was the last song that I wrote. Jeff and I both wrote and I think he had something started; and then I wrote the melody, but I didn’t have the words. So I went home to my studio and my daughter was sitting there playing and I looked at her thinking this is so difficult, because I think she’s going to have to go through something very hard…and whatever I can do…all that really matters to me is that she’s happy. I started writing that song, I was crying and I thought this album’s done, this is the one I needed, because it ties the whole story together…whatever you are going through, as long as the people you love are happy everything’s going to be o.k.

Gigi: I just want to say that Smile is a beautifully written, composed work that should be heard by all.

Depending on how he looks at it, Kenny Garrett’s latest album, Sounds from the Ancestors, has been out for an eternity or an instant. Recorded … END_OF_DOCUMENT_TOKEN_TO_BE_REPLACED

As I delved ever deeper into the 14 albums that document the Larry Goldings/Peter Bernstein/Bill Stewart trio to prepare for our January Zoom conversation, what … END_OF_DOCUMENT_TOKEN_TO_BE_REPLACED

The musical avant-garde is an area where creative people who have earned wisdom through a lifetime of experience can flourish. Wadada Leo Smith, who last … END_OF_DOCUMENT_TOKEN_TO_BE_REPLACED

Wisconsin-born and proud: For all of the avant-everything complexity Ethan Iverson has applied to his solo projects or the sounds he created in his role … END_OF_DOCUMENT_TOKEN_TO_BE_REPLACED