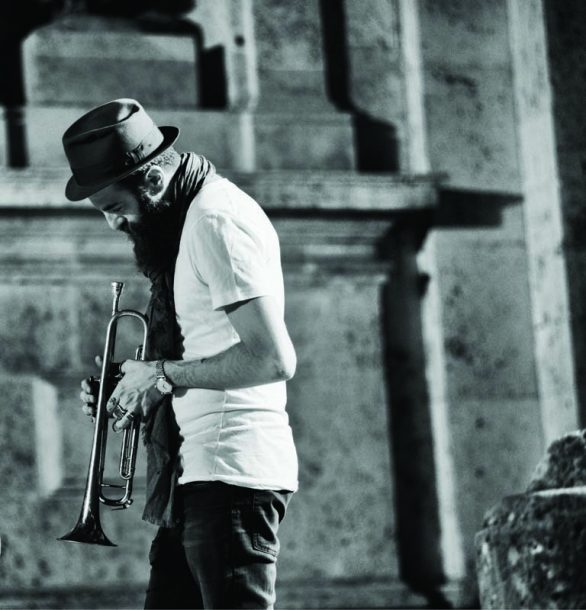 Early this year during the 2016 Jazz Cruise, JT publisher Lee Mergner sat down with the Israeli trumpeter-composer, 38, whose latest album and ECM debut, Into the Silence, is a meditative musical reconciliation of his father’s recent death. He’d just come from a long sojourn with his family to India, which served as a spiritual and creative retreat.

In a lengthy and freewheeling interview, Cohen talked about his journey from Israel to Berklee to NYC, and about his evolution as a trumpeter. Cohen was performing on the cruise with his talented siblings-clarinetist/saxophonist Anat and saxophonist Yuval-billed as the 3 Cohens and well received. The trumpeter, whose placid demeanor belies a great emotional sensitivity, demonstrated a wry sense of humor-a contemplative yin to sister Anat’s exuberant yang. Here are some highlights, edited for space and clarity.

Did you have any connection with the ECM legacy, or with ECM trumpeters like Enrico Rava and Kenny Wheeler?

No, not with the trumpeters. What I love about ECM is that when I came to record this music, I knew that [ECM founder and producer] Manfred [Eicher has] heard everything. He’s not going to get scared by anything I bring. The first track we recorded was “Dream Like a Child,” this 15-minute thing. Manfred is not the kind of guy who will tell you, “Hey, let’s do a four-minute version for radio.” It’s really pure and it’s really free.

The inspiration for the album was dealing with the death of your father.

In that period after [his death], every time I came to the piano I had this one sound that kept coming in, which is the beginning chord of the title track. When I was about to record, I knew I wanted to keep all the music very current and not bring anything from the past-not even if I had some good tune that could be part of [the album]. No, it had to be representative of this period, those emotions.

The album seems to embrace a sense of melancholy, but with a certain beauty.

That’s very right, because every time when I was mourning I was thinking, “I’m so sad that I’m missing him so much, but I’m so glad that I have all those things to miss about him.”

Do you think your trumpet sound has evolved over the years?

I hope so. It’s still evolving. It’s not like I can get a sound and then, that’s it, that’s my sound. I think my sound is a mix of all my masters and teachers that I learned from-from Dizzy to Clifford to Lee Morgan to Miles to Thad Jones to Clark Terry to Chet Baker.

Did you really study all of them?

Yes, I spent hours and hours getting those sounds. Coming from Israel, you don’t have them there; you couldn’t see any of them live. All we had were tapes. I don’t know what my sound is, but I know it’s that mixture of all my experiences and influences.

You’re playing here on the Jazz Cruise with Anat and Yuval. It’s a great band, and you have such an organic blend as horn players. Did you play a lot together when you were younger?

We really became a band after Berklee, even though we recorded a couple of tracks for the Berklee label. It was so obvious and such a natural thing to play together that we didn’t think it would be anything special. We knew we’d blend. We were each focused on our own things. At that point at Berklee I was still focused on playing the horn. Until 10 years ago, that was all I was focused on: how to last a whole gig without busting my chops.

We always shared a love of different kinds of music as well: Anat with her Brazilian thing, Latin and classical; and I always loved funk, rock and reggae, and Latin music. After a while we toured Poland, because Yuval was invited and he said, “Why don’t I bring my brother and sister as guests?” Only there in Poland, about 15 years ago, when we saw the reaction to the three of us playing, that’s when we realized we had something special.

As close as you are, you’re also very different.

Oh, yes. Very different. The truth is that we do get along very well. We never fight. Well, we fight, but nothing serious. There’s never a period where we’re not talking. We appreciate the fact that we’re so close. Also, we’re three siblings that share the same passion. We have the same job and we get to work together. And we have to work together to make it work. As we were rehearsing today in the dressing room, we laughed and made fun of each other in a very friendly way. These are my favorite people in the world. They’re my best friends.

Depending on how he looks at it, Kenny Garrett’s latest album, Sounds from the Ancestors, has been out for an eternity or an instant. Recorded … END_OF_DOCUMENT_TOKEN_TO_BE_REPLACED

As I delved ever deeper into the 14 albums that document the Larry Goldings/Peter Bernstein/Bill Stewart trio to prepare for our January Zoom conversation, what … END_OF_DOCUMENT_TOKEN_TO_BE_REPLACED

The musical avant-garde is an area where creative people who have earned wisdom through a lifetime of experience can flourish. Wadada Leo Smith, who last … END_OF_DOCUMENT_TOKEN_TO_BE_REPLACED

Wisconsin-born and proud: For all of the avant-everything complexity Ethan Iverson has applied to his solo projects or the sounds he created in his role … END_OF_DOCUMENT_TOKEN_TO_BE_REPLACED