Skip to content
Become a member and get exclusive access to articles, live sessions and more!
Start Your Free Trial
Home > Features > A Conversation with Vocalist ABIAH 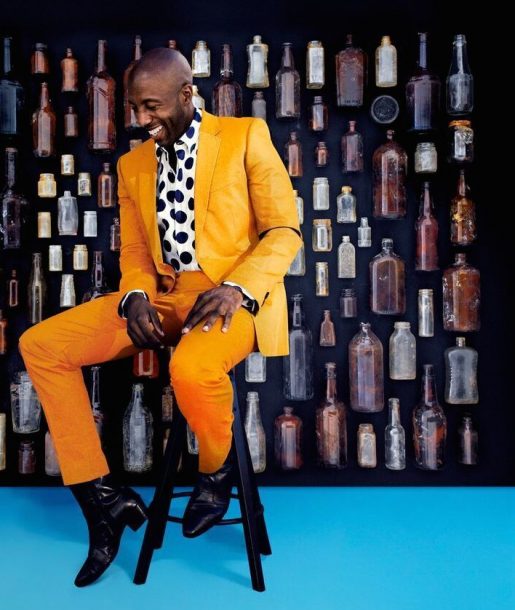 Every now and then the music industry is blessed with a true, untainted, pure voice. Ghanaian singer ABIAH (Ah-be-ah) possesses a voice that has captured and mesmerized millions around the world.

I was fortunate to interview him for this magazine in 2012 (here), during the release of his debut album, Life as a Ballad, which included such personnel as Robert Glasper and many others.

Recently we sat down to discuss Abiah’s third release, Bottles, on his label Madoh Music Group. In September 2015, ABIAH performed selections from Bottles Gigi Brooks: This is not the first time I’ve had the opportunity to interview you. I have been following your career and really enjoyed your performance of your new release, Bottles, at the Blue Note in New York City, which was mind-blowing! It is a mix of symphonic, jazzy, sultry, beautiful music. What inspired this project for you?

ABIAH: Bottles actually came out in July 2015 in Asia, because my first album, Life as a Ballad, became a big success in Japan. I basically have worked over the last four years touring and performing at some of the big festivals in Asia, since that’s where my fans are really into what my sound is, so I spent 2014 creating the Bottles album. My label partner in Japan put it out in July 2015. Then in December 2015, my Taiwanese label put it out, and now here in the States we released it in March, so it’s been a long time coming, I would say.

GB: The release includes originals and covers, one of which is “Crazy,” by Beyoncé. I have to say I could not have imagined such a beautiful, classic interpretation of this song in my lifetime.

ABIAH I think people are really into the way that I re-imagine music, and I learned that skill from Nina Simone; she is one of my biggest influences. I would hear a song that Nina Simone did that I never knew was actually someone else’s song. Then I would hear it again and say, “Wait a minute. I heard Nina Simone sing that.” Then I discovered that it was someone else’s song and not hers. That really formed the way that I would recreate music and I really learned that skill from Nina Simone, but then it took on its own life.

ABIAH: I believe that’s what my real gift is when it comes to doing covers. I think a lot of people do covers, but then it kinda sounds like karaoke. I think that the beauty of doing a cover is to make the song your own. It’s something that comes organically to me at this point in my life. I have my own sound. If you’re going to cover something, you have to bring it into your world. I think I have my own world to share with people and with every album I try to find someone else’s song to re-imagine. What I mean by re-imagine is I take a portion of the person’s lyrics and a portion of their melody enough where it’s recognizable, and I make a whole new landscape for that music. As you hear from “Crazy In Love,” my version calling it “Crazy,” I took the music and I kind of borrowed a little bit from Beethoven, and a little bit from Chopin, and created the accompaniment of it. Afterward, I just built a world around the music to frame the lyrics, and made a song that has obviously a really heavy beat, an up-tempo song, and slow it down so that people could experience the lyrics in a new way to where they could now hear the words and feel my voice and experience that “Crazy In Love” experience all over again.

GB: I was stunned when I heard the music and your voice on that track.

ABIAH: Thank you so much. The album title came from a time when I was doing the music video for my last album, Life as a Ballad. I was on a beach, actually a land field in the deep part of Brooklyn called Dead Horse Bay. While I was on that beach as the water came to shore, you could hear this chiming sound … “bleedle, bleedle, bleedle, blee”… It was the sound of shards of glass that are embedded in the sand of the beach. When I heard that, something instantaneously popped in my head: “Bottles!” I knew that was going to be the title of my next album and I lived with it for two years, not knowing what it really meant. I just knew that the album would be called Bottles. I had the same experience with my album before that; I knew the title years before the album came into fruition. In 2014, as I was making the album, I went online and started looking for inspiration for images of bottles to kind of create the cover of my album. I came across this picture of all these bottles; they were all different shapes, they looked worn like they had been through something. It struck me so intensely, I felt an immediate connection to these bottles. I Googled the picture to find out who it belonged to, and went to the guy’s website; his name is Barry Rosenthal. I saw that picture and I read the description of this bottle picture and it said collected … guess where?

GB: Not where I think you’re going to tell me …

ABIAH: Yes! It was where I was filming my video and where I got the title, at the beach in Brooklyn! I literally started weeping, because I felt that I’m in sync with something here and I felt like I was obedient in sharing this title and then to actually discover this artist’s picture, it really put two and two together. So, I went to his website and I wrote him a long letter telling him how much these bottles meant to me, and he wrote back to me telling me he was so moved; he had never had anyone reach out to him in this way. I asked permission to use this picture for my album cover and I basically framed everything else around these bottles, because I needed to honor that moment. Then it goes a little bit further, because I asked myself what does Bottles really mean? I have the picture, I have the title, I don’t know what this “Bottles” really means! Then I heard God say to me, “Are you content with your content?” And I thought, wow! Content and content look the same. What does that mean? Then I started to recognize what you put in is what comes out. If you fill yourself with hate, hate will come out of you. If you fill yourself with love, love will come out of you. I started framing the album around these concepts of love, perseverance and joy. Like the song “Sorry” I’ve been married for a few years and one of the things I have experienced is my inability or my lack of saying sorry and how much it has affected my wife, because I’m not one to say sorry very easily. I wrote this song in about 15 minutes. You learn to say sorry no matter who’s right or wrong. When you say sorry, it’s the word sorry that rights the wrong. It’s so poetic, but it’s so poignant and so true. So, that’s the story of Bottles and how it came along, with my famed musician team of people. Robert Glasper is not on this new album, but I do have my famed musician team, who I’ve been touring with for about 10 years.

GB: You are really teaching people to love through your music. Let’s touch a little bit on your vocal coaching. You have coached some of the greatest vocalists today. What advice do you have for those who can’t get to you for vocal coaching? What should they do?

ABIAH: That’s a good question. I think if someone’s really interested in really improving their instrument, they should seek out a second pair of ears. Every professional artist I know has a second pair of ears, someone who professionally mentors them in some capacity vocally or artistically, so they can keep growing and evolving. Being one-on-one allows me to tap into what is great about their artistry and what’s not so great, and what needs to be corrected, and then bring it to the next level. So, that’s what I’m working on in that capacity.

GB: You’ve also been doing some work in L.A. for film and television. How is that going for you?

ABIAH: That’s right. I have other projects for film and television that I’m writing. For example, I had the opportunity to write a theme song for a Nickelodeon film called Little Ballers, about a basketball team based out of New York. I also did some vocal production on the Nina Simone film, the Netflix movie,What Happened, Miss Simone? I had an opportunity to do the vocal production, which Robert Glasper called me in to do. So, I’ve been keeping my hands in many different pots and they all lead to a certain place.

Depending on how he looks at it, Kenny Garrett’s latest album, Sounds from the Ancestors, has been out for an eternity or an instant. Recorded … END_OF_DOCUMENT_TOKEN_TO_BE_REPLACED

As I delved ever deeper into the 14 albums that document the Larry Goldings/Peter Bernstein/Bill Stewart trio to prepare for our January Zoom conversation, what … END_OF_DOCUMENT_TOKEN_TO_BE_REPLACED

The musical avant-garde is an area where creative people who have earned wisdom through a lifetime of experience can flourish. Wadada Leo Smith, who last … END_OF_DOCUMENT_TOKEN_TO_BE_REPLACED

Wisconsin-born and proud: For all of the avant-everything complexity Ethan Iverson has applied to his solo projects or the sounds he created in his role … END_OF_DOCUMENT_TOKEN_TO_BE_REPLACED