Skip to content
Become a member and get exclusive access to articles, live sessions and more!
Start Your Free Trial
Home > Features > A Conversation With Theo Croker 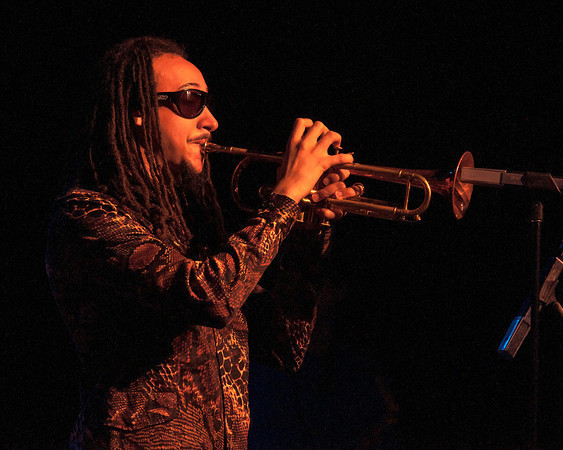 A frightening presidential election; surging racial tension in the U.S. and abroad; a scary new era of worldwide terrorism: It’s only natural to crave escapism in 2016, and to hope for the best for humanity. If you’re a fan of modern jazz-funk, Theo Croker’s latest disc, Escape Velocity (OKeh), will fill your needs.

To paraphrase George Clinton, the 31-year-old trumpeter, composer and arranger brings forth the good times, with such uplifting tunes as “This Could Be (For the Traveling Soul),” which thumps to a rugged samba-meets-R&B groove; the shimmering “In Orbit,” where Croker blows his trumpet inside an alternately serrating and serene ambiance; and a glowing contemporary treatment of Norman Connors’ 1973 classic “Love From the Sun,” featuring Croker’s mentor Dee Dee Bridgewater channeling her earlier jazz-funk roots.

Croker, who was raised in Florida and educated at Oberlin, states his m.o. clearly on the thunderous opener, “Raise Your Vibrations.” There, he intones, “Do not fear the end/Life continues on a higher realm/Focus on our mission and fulfill our present/Transcend to the future,” amid sustained reverb, tumbling drumming and electronics-enhanced trumpet flurries.

Fresh from a European tour, Croker elaborated on the disc’s purposes via Skype. He also talked about his seven-year stint in Shanghai, and how he continues to pay homage to his legendary late grandfather, trumpeter Doc Cheatham.

Talk a bit about the philosophy behind Escape Velocity.

It’s an escape from all the stuff in the world that doesn’t serve our higher selves-for instance, [it’s about] getting away from overconsumption. It’s also about getting away from low vibrations like anger and racism. Escape Velocity is a spiritual journey through trying to realize our highest potential as conscious beings.

In some ways, Escape Velocity is a logical follow-up to your previous funk-informed release from 2014, Afro Physicist. What did you hope to do or say differently with the new disc?

On the new record, I wanted to really exercise some of my skills as a producer. My drummer, Kassa Overall, was the co-producer. I wanted to find a nice blend of sound between electric instruments like keyboards, guitars and synthesizers and our acoustic sound.

How did you achieve that sonic balance?

In doing that, we didn’t want to lose the spontaneous aspect of the music. So if there was a song in which we were adding percussion, when we got to that part after we had done a take, the percussion player would get only one take [to overdub], so [he could] actually react to what he was hearing right away. Basically, it kept the live aspect of the music.

With Doc Cheatham being your grandfather, do you feel pressure to carry his torch in some fashion?

No, because I incorporate [him into] my lineage. I’m not walking away from it. When I play, write or record, I’m standing on that lineage and adding to it.

What do you remember most about your grandfather?

Before he died, I was around him a lot during some of his shows. His whole persona was very patient, dignified and sophisticated, and that translated directly into his playing. He was also very free on the trumpet. He could play anything he wanted, but he didn’t come off sounding like this virtuosic “I can play anything I want.” Instead, it came off beautifully, and was accessible to people.

But when you transcribe it and try to play what he did, you realize how difficult his music was. He was always playing melodies, even when he was improvising. The older I get, the more I listen to his music because there’s so many layers of beauty that come out of it.

How did the experience of living in Shanghai between 2006 and 2013 shape your approach to music?

China was the place where I was able to get involved with a lot of other different types of music that wasn’t straight-ahead jazz but was for the same audiences. I was playing with a lot of African musicians from Mauritius. They have their own groove called sega. So getting into that, then applying jazz harmonic knowledge and improvisation [over something other than] a swing beat was fantastic. I was in a rock-fusion band that played these long, 45-minute opera-type compositions with all these solos over 9/8 reggae beats. I was also in a salsa band, which is murderous on trumpet players. Living in Shanghai taught me how to revert to just playing music. The more that you can take all of that information and apply it, the more you can have your own unique sound.

Depending on how he looks at it, Kenny Garrett’s latest album, Sounds from the Ancestors, has been out for an eternity or an instant. Recorded … END_OF_DOCUMENT_TOKEN_TO_BE_REPLACED

As I delved ever deeper into the 14 albums that document the Larry Goldings/Peter Bernstein/Bill Stewart trio to prepare for our January Zoom conversation, what … END_OF_DOCUMENT_TOKEN_TO_BE_REPLACED

The musical avant-garde is an area where creative people who have earned wisdom through a lifetime of experience can flourish. Wadada Leo Smith, who last … END_OF_DOCUMENT_TOKEN_TO_BE_REPLACED

Wisconsin-born and proud: For all of the avant-everything complexity Ethan Iverson has applied to his solo projects or the sounds he created in his role … END_OF_DOCUMENT_TOKEN_TO_BE_REPLACED