Skip to content
Become a member and get exclusive access to articles, live sessions and more!
Start Your Free Trial
Home > Features > Wycliffe Gordon: A Man of Many Talents 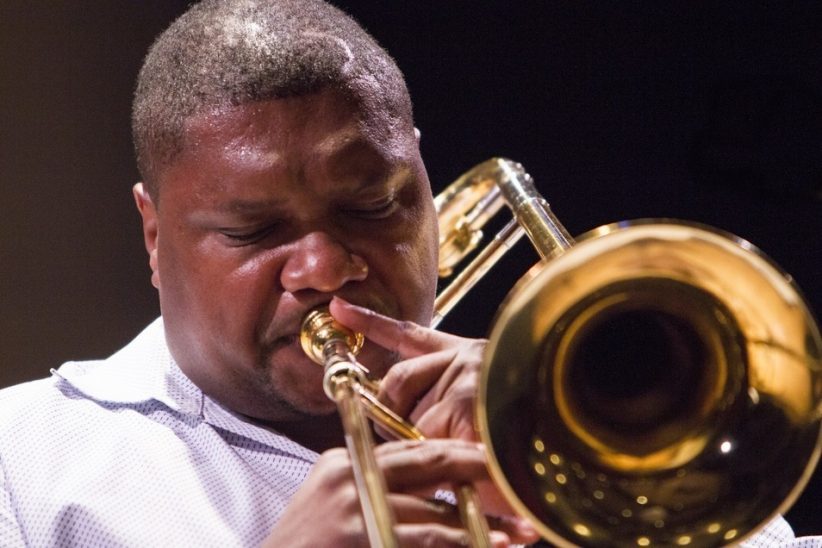 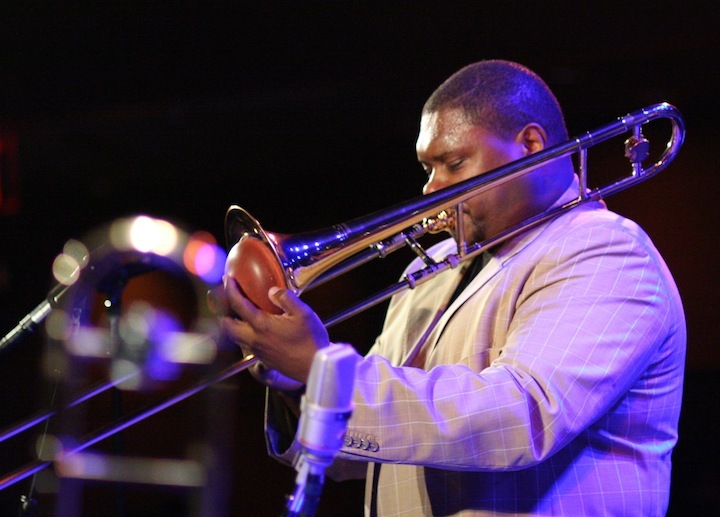 Well, unless you climbed into a time machine and traveled to 1922 Chicago to dig Louis Armstrong blowing second cornet at the Lincoln Gardens with King Oliver’s Creole Jazz Band, I bet my August 1 beat yours, for I was standing next to George Avakian—creator of the LP, producer of Duke and Pops, and a true gentleman—listening to Wycliffe Gordon and his band play one of the most exaltedly exciting sets of jazz I’ve ever heard.

The Satchmo Summerfest, held the first weekend of August in New Orleans, is easily one of the greatest jazz festivals in the world. With musicians such as Tim Laughlin, Allen Toussaint, Ellis Marsalis, Kermit Ruffins, Leroy Jones and too many others to mention (not to mention every type of New Orleans food you can dream about, plus Pops’ music wafting out over the heavy NOLA air in between acts, plus various speakers such as Dan Morgenstern, George Avakian, Michael Cogswell and Ricky Riccardi, plus a jazz mass held in Sidney Bechet’s church followed by a wild second line parade), the festival gave tens of thousands of folks four perfect days. This year Wycliffe Gordon held court, not only blowing one of the finest trombones ever, but also a deeply swinging, soulful trumpet combined with some mighty spicy singing. The set was exciting, stinging, and spiritually moving. Mr. Avakian agreed.

Thoroughly gobsmacked by Gordon and his band, I asked him, Was this a special gig, or are you always this magnificent? He replied, “I can’t say that I am always that magnificent (chuckling), but I most certainly try to be. This gig (at the Satchmo Summerfest) was very special because it was about celebrating one of my greatest heroes as well as the greatest humanitarian ever: Louis Armstrong! To do this in New Orleans and to do it my way meant the world to me. Celebrating Pops makes me a better person.”

Speaking of celebrating Pops, order Wycliffe’s terrific album Hello, Pops (Blues Back Records) as soon as possible. A warning, though: You’ll be humming/whistling/singing the title song for the next four months! Along with What You Dealin’ With, United Soul Experience, In the Cross and Dig This! (all on Criss Cross), it’s one of my favorite Gordon albums.

Born in Waynesboro, Georgia in 1967, Wycliffe was bequeathed a five-album jazz anthology by a beloved great aunt. As he told Nat Hentoff, “I heard slave chants, ragtime, Jelly Roll Morton, all the way up to Duke Ellington.” But it was Louis Armstrong’s 1927 recording of “Keyhole Blues” that sealed the deal: “It was Pops’ silvery, singing sound,” he told Hentoff, “and the feeling he put into his music.”

As the late, great cornet player Ruby Braff told me one rainy afternoon in a Cape Cod deli, “Once you’ve been bitten by Pops, you’re never the same. You see and hear the world differently. You’re a better person.”

Or as Wycliffe puts it, Armstrong is “the greatest musical ambassador of all time! Everyone loved Louis, even those who claimed to not like him. How can you hate someone who loved everyone?”

We non-musicians can also be affected by Pops. Armstrong’s example of how to live on this planet so inspired me that I spent two years writing a novel, Travels With Louis (Leapfrog Press), with the great man himself as a major character. Knowing Wycliffe’s love and knowledge of Pops, I was a bit apprehensive about his reaction. I needn’t have been. “Your book brought tears to my eyes. Travels With Louis should be required reading for grade schools throughout this nation. Then it should be translated into various languages so that the world at large can benefit from the legacy and influence of Louis Armstrong’s life example. And the book is as great for adults as it is for teens.” To hear words like these from a musician one has admired for many years is as sweet as one would imagine.

In mid-September, Wycliffe spent four days in Rostov, Russia. How receptive are today’s Russians to jazz? “The audience was very receptive and unexpectedly hip. I say that because I did not expect to see an audience so hip to jazz in such a remote place. What sold me on the whole trip was hearing a youth group, ages 13 to 16, perform this music at such a high level. I was floored when those ‘kids’ began to play and sounded like grown folks. Musical grownups are what they were. Unreal! The command of their instruments and the jazz language (spoken) by those youngsters was unbelievable.”

Wycliffe, naturally, was once such a youngster himself. Born into a musical family, he picked up the trombone at 12. A member of the esteemed McDonald’s All-American High School Marching Band, Gordon attended Florida A&M University where in 1987 he met visiting lecturer Wynton Marsalis. Did he have any clue how important this meeting would be to his future? “Not at all. Wynton was a nice guy—a regular dude—like all of us in college, and that’s what I liked about him. He had on sweatpants and he talked to us and shared his experiences as if he were saying, subliminally, that we could all do the same things he had done. Down to Earth is what I remember about him most and what I liked most about meeting him.”

Two years later, in 1989, Gordon joined Marsalis’ Septet. Moving to Manhattan must have been quite the eye-opening experience for a young man from a small Georgia town. “For me,” recalls Gordon, “it was unreal. I’d been to NYC once before in high school with the McDonald’s All-American High School Marching Band for the Macy’s Thanksgiving Day Parade in 1984. The people in the city and the pace of it all were a bit of a culture shock, but I was somewhat sheltered in that band. Coming [to New York] as a professional musician was even more of a shock. Being from a small town in Georgia to entering the busiest city in the world was amazing.”

In New Orleans I was amazed myself at Wycliffe’s warm, soulful skill on trumpet. As he explained to the audience at Satchmo Summerfest: “Hey, I always play with trumpet players, so I don’t get to play trumpet myself.”

When asked if it’s difficult to switch from one instrument to the other, he replies, “Not difficult at all. I play 23 instruments, but most people wouldn’t know that and I certainly wouldn’t be caught traveling with them all.” In a way, it’s rather unfair: One of jazz’s most gifted trombonists also turns out to be a world-class trumpeter and singer. (And that still leaves 21 more instruments that he can play!)

So what’s up ahead for Wycliffe Gordon? “I am in the process of recording a big band project that will be used mainly to publish all of the charts I’ve written and arranged over the years. I am also recording and publishing the concert and gospel choir music; brass quintet music; trombone ensemble music (classical and jazz); concert band music; and funk music (that he’s written over the years). I am going to record and publish everything that I’ve ever written and the things I am still composing and make them available to the public.”

If Wycliffe and his ultra-fine band roll into your town, drop everything and drive down to see them. To quote Art Blakey, they produce a stirringly beautiful music that “washes away the dust of everyday life.”

And in the meantime, order yourself a copy of Hello, Pops (available at wycliffegordon.com), and prepare to sing that title song! Originally Published October 16, 2013

In spring 1963, when Coleman Hawkins was 58 and making some of the most astonishing music of his career, he gave a short but revealing … END_OF_DOCUMENT_TOKEN_TO_BE_REPLACED

Forgive me if I’ve mentioned this before (perhaps repeatedly), but I’ve been playing guitar now for more than 40 years. So when the time comes … END_OF_DOCUMENT_TOKEN_TO_BE_REPLACED

Organ trios and quartets were ubiquitous by the mid-1960s. In African American neighborhood bars and clubs up and down the East Coast, throughout the Rust … END_OF_DOCUMENT_TOKEN_TO_BE_REPLACED

Terence Blanchard looked around the restaurant table and launched into a gentle sermon about jazz education in Detroit that was part homily, part pep talk, … END_OF_DOCUMENT_TOKEN_TO_BE_REPLACED