Skip to content
Become a member and get exclusive access to articles, live sessions and more!
Start Your Free Trial
Home > Features > Two Pianos & a Zappa at the Montreal Jazz Fest 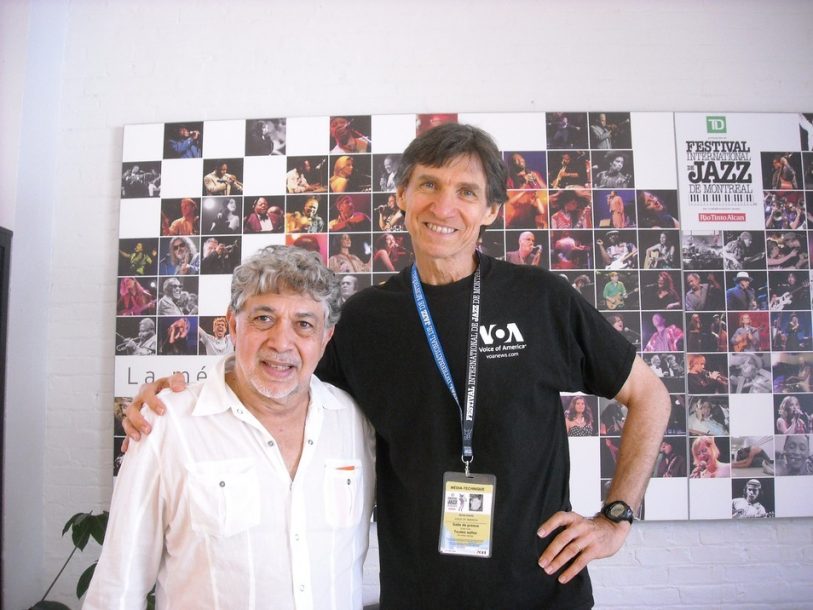 Monty Alexander and Russ Davis at the Montreal Jazz Festival

If you consider yourself a lover of great jazz piano then you would have been in heaven and in the grips of a delightful dilemma on the seventh day of the 35th Montreal Jazz Festival. There were more great pianists than you could possibly see and hear on this day, along with guitarists, singers, saxophonists…you get the idea. But the keyboardists were certainly in the spotlight as Brad Mehldau did double duty with two shows, one in a duo with Tigran Hamasyan and the other with his latest recording project with drummer Mark Guiliana as Mehliana. Then there was the legendary Randy Weston and local favorite, young Mr. John Roney, whom we discovered at last year’s festival, and the versatile pianist and vocalist Laila Biali who thrilled the crowd in front of the large outdoor stage in the plaza of the Place des Arts. But I chose to seek out a young Cuban pianist I’d never seen and a legendary Jamaican I’d seen but never spoken to. I’m talking about Rafael Zaldivar and Monty Alexander. Oh yeah, I thought I’d throw a little Zappa into the mix just for variety!

After my daily trek up to the top of the peak that gives this beautiful city its name, Mount Royal, I made my way to the Maison du Festival, the building that houses the press and media center as well as the offices and archives of this marvelous festival, to spend some time in conversation with the brilliant pianist from Kingston, Jamaica’s national jazz treasure Monty Alexander. I’d seen and briefly met Monty at a performance at Dizzy’s, the club in New York’s Jazz @ Lincoln Center complex that’s become an important location for some of his latest and greatest performances and recordings, but I’d never had a chance for a conversation on the record. I knew Monty to be a warm and animated person and he was all of that and more in our half hour chat.

Mr. Alexander had just turned 70 on June 6 and he looks and appears to be many years younger. A life in the arts can keep one young it seems and it’s certainly the case with Monty. I learned of his beginnings in music and the encouragement of his father who put him in front a piano at a very early age. One touch of the instrument and he was hooked. He was surrounded by many styles of music and interestingly never divided the things he heard into categories. It was all simply music to him so from the beginning it wasn’t bebop or reggae or classical or rock…it was just music. From the department of “first cut is the deepest” comes the reason for his facility to blend various styles so easily. I’d witness that fact in his performance at the Gesu later in the day.

After a delightful 30 minute interview with Monty Alexander, which I will be sharing with my audience on Voice of America and MOJA Radio soon, I was off to the intimate club on the street level of the Maison du Festival, Club L’Astral, to hear a young Cuban-born pianist, Rafael Zaldivar, who has made quite a name for himself in the Montreal jazz scene since coming North a few years ago. It didn’t take long for Canadians to notice his considerable talent and he has two recordings and numerous awards under his belt to prove that fact. He led a tightly knit quartet of Cuban and Quebecois musicians through an energetic hour of music under the title Afro Cuban Revival. There is plenty of African and Cuban influence in his music that features powerful and rhythmic grooves accentuated by his percussive piano playing in connection with his forceful drummer and conga player, but there is no denying a decidedly classical influence too. In my earlier conversation with Monty Alexander we had spoken of the various influences in the “jazz music” that emanates from the islands of the Caribbean and he made a point of stating that there was a serious classical influence in Cuban music that stems from their culture of music education and the emphasis on classical study there. Certainly young Mr. Zaldivar had done his homework. He’s a talent to be watched for years to come.

I’d return later to my piano appreciation tour on this day in Montreal but it was now time for a detour into the world of rock and jazz with the performance by Dweezil Zappa and his outrageous sextet Zappa Plays Zappa at the cavernous venue Metropolis. Frank may not have done his children any favors with the names Moon Unit and Dweezil, but he certainly gave his son some great genetic gifts when it comes to music and specifically guitar playing. Just as his father was, Dweezil is a guitar monster, squeezing overwhelming sound out of various electric guitars with an ease that only a master can. The packed house was filled with an air of electric anticipation and excitement. The hall was populated with old hippies in Zappa t-shirts and tie-dye as well as youngsters who have probably followed Dweezil and his band over the years, seeing some of his shows in Montreal. Since 2006 when he began this project of keeping his dad’s music alive he’s done over 500 shows all over the world, so the Canadian crowd is well acquainted with his work.

I’d seen the band a few years ago in Austin, Texas when they led on for Return To Forever IV and a highlight of the performance was a jam with Jean-Luc Ponty on the classic “King Kong,” but that was a short set for a crowd that had come to hear Chick, Stanley, Lenny and company. This was a two set evening with Zappa music and nothing but Zappa music so the intent was to give the people what they came for. Before the live performance began there was a 10-12 minute jazz-rock instrumental to warm up the crowd. As soon as the lights came up and Dweezil and company took the stage to a thunderous roar the game was on as rock married jazz with the Zappa classic “Zombie Woof” highlighted not only by those humorous lyrics but by trumpet and saxophone.

Dweezil is a man of few words compared to his father’s famous satirical banter between songs. He lets the music do the talking for the most part, but he let the crowd know that since this was a festival and a special occasion he wanted to give them lots of the most popular and familiar of Zappa classics. As the set progressed it appeared the performance might be more of a comedy-rock act, albeit with superior musicianship sans jazz, but when Dweezil and his saxophonist Shelia Gonzalez traded licks in a lengthy exchange I knew jazz was never far from the mind of young Mr. Zappa as he presented the brilliantly entertaining music of his famous and much-missed father. I got what I came for and I dare say so did the rest of this packed house of Zappa freaks.

Out into the steamy Montreal night I went for my last stop of the day and one more taste of piano jazz with a world-music flavor. Inside the intimate setting of what is probably my favorite venue in Montreal, the Gesu Centre De Creativite, a mature crowd of music lovers gathered to hear masterful piano playing and to soak up some Jamaican rhythm at the same time. They would not be disappointed. Monty Alexander’s Harlem-Kingston Express is a versatile sextet that features two drummers and two bassists as well as an electric guitarist and his acoustic piano. As Mr. Alexander had explained in our conversation earlier in the day he grew up musically loving both bebop piano and the music of his heritage. He has one foot in Jamaica with a nod to Africa and the other in Harlem where he played the famous club Minton’s early on in his jazz career. He’s played with Dizzy Gillespie as well as his countryman Ernest Ranglin so variety is indeed the spice of his life and his music.

From the beginning of his set Monty employed both his acoustic and electric bassists along with the drummers and electric guitarist to bring on the Jamaican side of things. In the middle of the piece the electric instruments dropped out to let the acoustic, swinging side emerge for a while until he was ready to turn on the electricity again to bring that Kingston rhythm back. As we had both agreed during our interview in the afternoon, if that reggae rhythm doesn’t make you move you had better have someone check your pulse as you may have moved on to the next phase! Monty Alexander’s ebullient spirit and engaging music made for a wonderful set of music and a fitting end to another marvelous day at the 35th Montreal Jazz Festival!

Organ trios and quartets were ubiquitous by the mid-1960s. In African American neighborhood bars and clubs up and down the East Coast, throughout the Rust … END_OF_DOCUMENT_TOKEN_TO_BE_REPLACED

Terence Blanchard looked around the restaurant table and launched into a gentle sermon about jazz education in Detroit that was part homily, part pep talk, … END_OF_DOCUMENT_TOKEN_TO_BE_REPLACED

Creating a program of solo piano music is the ultimate challenge for any improvising pianist. The music on my latest album, Ways of Disappearing (Sunnyside), … END_OF_DOCUMENT_TOKEN_TO_BE_REPLACED

First the good news: As you can see in our annual Festival Guide, there are plenty of jazz festivals scheduled to happen around the world … END_OF_DOCUMENT_TOKEN_TO_BE_REPLACED