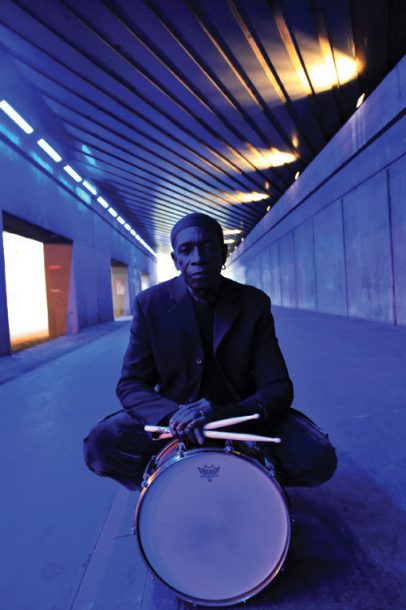 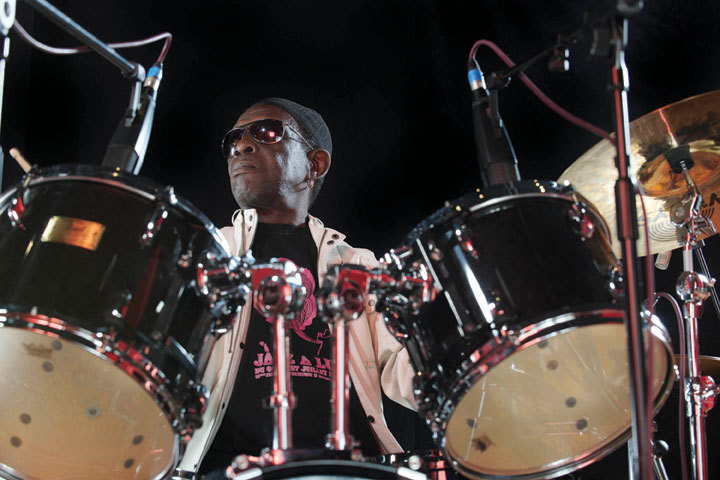 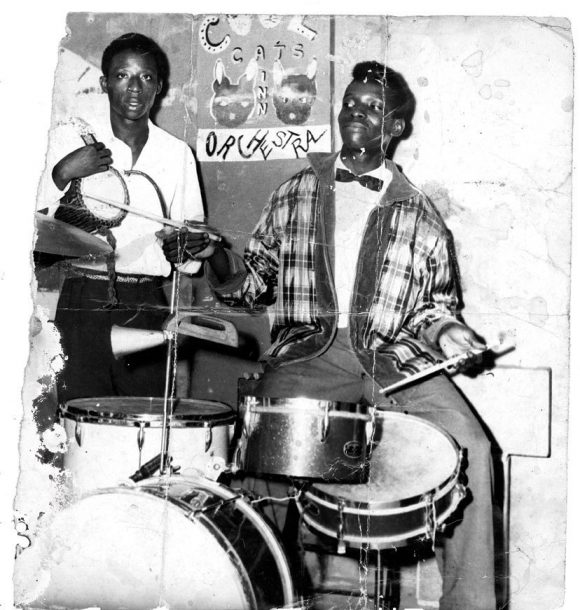 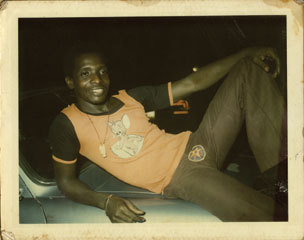 Tony Allen at home in 1975 (Photo courtesy of Tony Allen)

Playing in all those highlife bands and coming up under all of those tough bandleaders was good training for me because I learned how to demand respect for myself. But in my heart at that time, it was really jazz that I was aiming for. I have always listened to the great jazz drummers whenever I could. Listening to those guys made me understand the way the drum set should be played. In the beginning I was listening to Gene Krupa and I thought he was the greatest drummer in the world. But later when I started to hear others, like Philly Joe Jones, Elvin Jones, Art Blakey and Max Roach, it was like magic to me. “Ahh,” I said to myself. “Fucking hell.” This was serious. I wanted to play like all of them. All of these African-American guys, I felt as if they were stomping on my face with their drumming, because they were so great. The way they were drumming, it had all the spirituality and all the celebration in it. It wasn’t English. It wasn’t Western. It wasn’t what Gene Krupa was doing. It was a whole different language. We should have been playing the drum set like that in Nigeria. After all, it originally came from here. They took it, went there to the Americas, polished it, and sent it back to us in Africa.

I realized that the Gene Krupa style of playing had too much rolling for me. He was coming from more of a military style, and it was good-we all studied to get that and I wanted to get that myself. But people like Max Roach didn’t solo with lots of continuous rolling. Guys like Max and Elvin and Blakey and Philly Joe, they were telling a story on the drums. Krupa wasn’t doing that. These guys were telling a story by playing different rhythms, and they were doing it with independent coordination. That’s the way the drums should be played, man. That’s why jazz was a big discovery for me, a discovery that made me much better. And it was Fela Ransome-Kuti that gave me the opportunity to really play this music. After I met him, the whole game changed.

At this point it was 1963, and Fela had just arrived back from London and was working at the Nigerian Broadcasting Company (NBC). His job was presenter of jazz programs. He was playing jazz for 30 minutes on Friday nights, playing mainly Blue Note records. Fela spins nicely, man. Those 30 minutes, you were really going to enjoy them.

Fela was strictly a jazz man at that time. He was playing trumpet and a little piano, too. And he eventually decided that, since he was a musician, why should he be promoting other people’s music? So he decided to form a band called the Fela Ransome-Kuti Quartet with some musicians from the radio station and some outside help. But the NBC was mainly full of classical musicians. There was Fela Sowande, who was the boss, the composer and the biggest of them all. He ran the whole NBC, all the radio stations in the country-North, South, East, West. He was the master. And then there was Tunde Oyesiku, who also played classical compositions at NBC. Fela himself had been studying classical music in London and had just come back to Lagos after receiving his diploma. But there were no musicians who really thought anything of him at that time, because he was just working as a deejay at the NBC. He wasn’t really playing anything with anybody outside, or rubbing shoulders with the musicians around Lagos. And that’s why, to do the jazz thing, he had to make use of the musicians they had there at the NBC. There was one staff member at the NBC named Kingsley Etuk who was a very good jazz pianist. Then they brought in Ngomalio, the bassist from my first band with Sivor Lawson.

Excerpted with permission from Tony Allen: An Autobiography of the Master Drummer of Afrobeat by Tony Allen with Michael E. Veal. Duke University Press, 2013.

Organ trios and quartets were ubiquitous by the mid-1960s. In African American neighborhood bars and clubs up and down the East Coast, throughout the Rust … END_OF_DOCUMENT_TOKEN_TO_BE_REPLACED

Terence Blanchard looked around the restaurant table and launched into a gentle sermon about jazz education in Detroit that was part homily, part pep talk, … END_OF_DOCUMENT_TOKEN_TO_BE_REPLACED

Creating a program of solo piano music is the ultimate challenge for any improvising pianist. The music on my latest album, Ways of Disappearing (Sunnyside), … END_OF_DOCUMENT_TOKEN_TO_BE_REPLACED

First the good news: As you can see in our annual Festival Guide, there are plenty of jazz festivals scheduled to happen around the world … END_OF_DOCUMENT_TOKEN_TO_BE_REPLACED