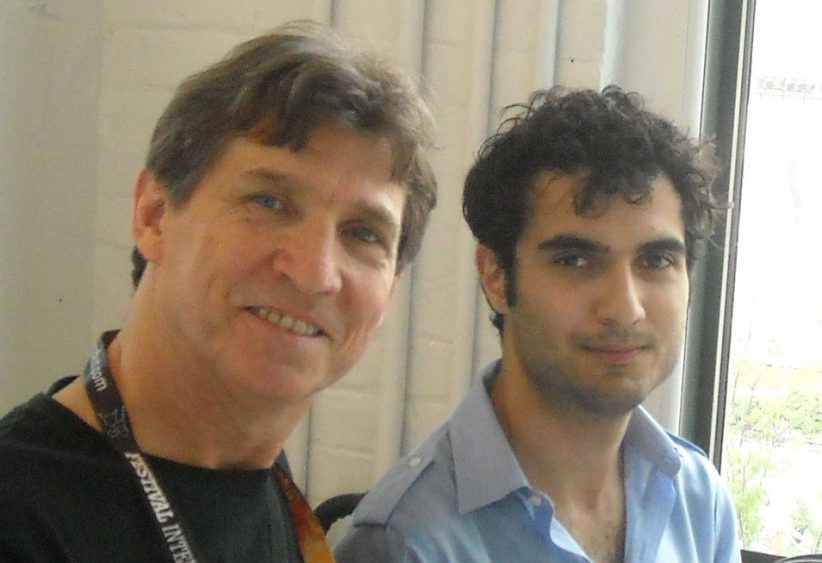 Tigran Hamasyan and Russ Davis at the Montreal Jazz Festival

Question: How does one travel to Denmark, Armenia, Zimbabwe and New Orleans in one day and never go farther than one square mile? The answer is by attending the Montreal Jazz Festival on July 3, 2014 and have your handy festival guide in hand and your walking shoes on! On this, my third full day at the festival, I set out to get a taste of some of the international offerings at the 35th Montreal Jazz Fest, always one of my primary intentions when attending this event, and I began with a visit with three funky dudes from Denmark known as Ibrahim Electric.

Guitarist Niclas Knudsen, drummer Stefan Pasborg and organist Jeppe Tuxen have been at it for a decade now making a name for themselves in Europe for the most part. But news of their eclectic mix of funk, jazz, rock and world music has most certainly reached these shores. I had somehow found a copy of their 2006 release Absinthe a few years ago and wondered what else these guys were up to. Well, after hearing one of their two sets at the festival, their first appearance here, I now know. These guys are not just a fun-time, grooving, party band, though they certainly had heads bopping, feet tapping and booties shaking during their show, they have a wealth of styles that blend in such an inventive way there is simply no way to pigeonhole them.

The set began with a groove that would have pleased Jimmy Smith, Jack McDuff, Robert Walter or John Medeski. Just when I thought I might have them figured out the next song began with a Middle Eastern tinge that morphed into something that seemed like a theme to an imaginary spy movie. Songs followed that incorporated a bit of this and that and exhibited how many different sounds one can squeeze from a Telecaster guitar, a set of drums and a Hammond B3 organ. Can you say “inventive?” I know these guys can. I spoke with guitarist Nicklas Knudsen and got some information on the group, plus three more of their albums I’ll be sharing with you soon. Nicklas told me that they play a lot in Scandinavia but have been to North America a bit and that their main source of inspiration comes from American music from the ’60s & ’70s though he has been to Africa, is heavily influenced by the music from the continent, and also feels connected to the Euro-jazz scene by playing electric, improvised music but also dabbling in electronic music too. You’ll hear more from these guys if I have anything to say about it…and I DO…so stay tuned.

I left Niclas and Ibrahim Electric to their own devices and made my way to The Gesu Theatre for another trip to another part of the world to hear the young Armenian-born piano master Tigran Hamasyan who now goes simply by the single name Tigran. After winning the Thelonious Monk Piano Competition a few years ago he’s made such a name for himself that the Montreal Jazz Festival gave him three spot-light shows this year. He set up shop in the Gesu to play duet shows with Ambrose Akinmusire, then Brad Mehldau and on this night with his own quintet to perform the music of his latest work titled Shadow Theater. I’d spoken to Tigran at the 2011 Montreal Jazz Fest and found that his musical vision comes from a few varied sources including classic rock as well as classic jazz, the traditional music of his homeland, Armenia, which includes folk and classical traditions.

He mentioned that jazz was not a foreign sound or style to him growing up as there was a true jazz tradition in Armenia from the 1930’s and beyond. You learn something every time you talk to an artist and this was certainly something I never imagined. Tigran is creating his own tradition and exhibited this in his performance as he took the stage alone to play some solo piano with some electronic embellishments. As the piece continued he was joined by his quintet and the music developed nicely to present Tigran’s complete stylistic intent. Instead of continuous improvisation by himself and his band mates Tigran primarily established rhythmic patterns to convey the musical message in this performance. There is a modern jazz-rock timbre to the sound and it’s decidedly electro-acoustic as well. I heard a lot of classical influence too with an operatic tone that came from the vocal work of Tigran and the female member of his band. There were Eastern overtones too that obviously come from Armenian folk. Tigran is an artist that is sure to develop wonderfully and that I’m sure to follow.

I was on my way to my next stop, the beautiful Theatre Maisonneuve to hear Terence Blanchard, a great side trip would be to Africa, Zimbabwe to be specific, to hear the energetic sextet Mokoomba. These guys were playing the second of two free shows outdoors and by all accounts had become one of the sensations of the festivals many free offerings. Their blend of world-jazz coming from the Tonga rhythms of their homeland, modern hip hop, rock and blues was a pleasing mix for the festival audience who couldn’t stop moving to the groove. Their latest album, Rising Tide, was recorded in Belgium and features not only their great vocalizing and the band’s fine percussion, keyboard and guitar work but a large horn section too. If you wonder what might have inspired Hip Hop look no further than a place like Zimbabwe and a group like this one. I always seem to discover a unique African band or artist when I come to Montreal and this year it was Mokoomba.

Off to Maisonneuve I went to settle in for two sets featuring the trumpet master from New Orleans, Terence Blanchard to close out the day. Terence would perform first with his own quintet and then with L’Orchestre National de Jazz de Montreal led by their local musical treasure composer, bandleader and saxophonist Christine Jensen. Christine would be directing the Orchestra on this evening in the second set, but to begin the evening Andre Menard, the esteemed co-founder and director of the Montreal Jazz Festival for these 35 grand years took the stage to present Mr. Blanchard with the 21st Miles Davis Award. It was a touching and entertaining presentation as Terence told a personal story of how Miles had complemented him for his work and been a friend since the early 1980’s when Terence was only a young gun coming into his own. That being done, it was time for the music.

Terence and his quintet played a set primarily from his latest release Magnetic. If you came to the hall on this evening to hear “When The Saints Go Marching In” or a salute to Louis Armstrong you were in the wrong place. No traditional New Orleans music and not much straight swing would be coming in this set. There was plenty of high-level improvisation from Mr. Blanchard and most especially saxophonist Brice Winston and young Cuban-born piano discovery Fabian Almazan, but the music came from a free and dreamy place and stayed there for the most part. Terence has spent a lot of his time writing soundtracks and arranging music for large ensembles so the craft is strong for him and it seems that even with a small group the orchestration and composition is a major focus. Combine that with his awesome ability to emote via his instrument and you’ve got a real treat.

After a short break the quintet took the stage again along with the members of Montreal’s Jazz Orchestra with Ms. Jensen directing. Terence made a major point in the beginning of stating that when he began composing for film, and that was back in 1992 with the soundtrack for Malcolm X, he was sometimes told in meetings that jazz didn’t work in film soundtracks. He begged to differ and in his career, as well as on this night, went about the business of proving them wrong. He reached back into his 1999 release Jazz In Film to bring on the theme from “Taxi Driver” and other pieces. He then gave the spotlight to Christine Jensen and her large aggregation. This is indeed an Orchestra, not a jazz big band, so there was not much hint of swing to be found in the next four tunes, all written and arranged by Ms. Jensen. There was a dreamy, jazzy spirit conjured by most of the music as if the soundtrack for the film titled July 3rd at the Montreal Jazz Fest was being performed. The show ended with one last piece of evidence being presented my Mr. Blanchard to prove his case of the fact that jazz and films DO match. The performance of Duke Ellington’s “Anatomy of a Murder” was a perfectly, sweetly swinging end to the set and to a night of “jazz as high art” and to my third day at the 2014 Montreal Jazz Festival!

Organ trios and quartets were ubiquitous by the mid-1960s. In African American neighborhood bars and clubs up and down the East Coast, throughout the Rust … END_OF_DOCUMENT_TOKEN_TO_BE_REPLACED

Terence Blanchard looked around the restaurant table and launched into a gentle sermon about jazz education in Detroit that was part homily, part pep talk, … END_OF_DOCUMENT_TOKEN_TO_BE_REPLACED

Creating a program of solo piano music is the ultimate challenge for any improvising pianist. The music on my latest album, Ways of Disappearing (Sunnyside), … END_OF_DOCUMENT_TOKEN_TO_BE_REPLACED

First the good news: As you can see in our annual Festival Guide, there are plenty of jazz festivals scheduled to happen around the world … END_OF_DOCUMENT_TOKEN_TO_BE_REPLACED