Skip to content
Become a member and get exclusive access to articles, live sessions and more!
Start Your Free Trial
Home > Features > The NYC-Based Justice for Jazz Artists Campaign 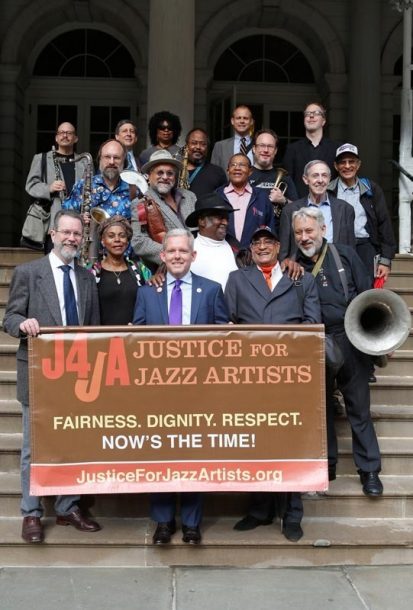 New York City Council members, musicians and Local 802 staff and officers in front of City Hall in Manhattan in October 2014

It’s not every day that the New York City Council issues a formal declaration in support of financial relief for jazz musicians. Shepherded through by Majority Leader Jimmy Van Bramer and several other council members, Resolution 207 passed on Oct. 7. It affirmed the body’s official support for Justice for Jazz Artists (J4JA), a campaign by Local 802 of the American Federation of Musicians (AFM) to convince the major New York jazz clubs to begin contributing to a union-run pension fund. (The sole “no” votes were two Staten Island Republicans.) Though it has no legal force, Resolution 207 could signal the beginning of a change in how jazz musicians, union and non-union, think about their long-term economic prospects.

Back in the mid-’00s the union was actively negotiating a pension arrangement with the clubs. That communication has ended. J4JA’s current targets-the Blue Note, Village Vanguard, Jazz Standard, Birdland, Iridium and Dizzy’s Club Coca-Cola-are by and large refusing to engage the union (and the media, for that matter) in the face of occasional curbside demonstrations and other confrontational tactics. Meanwhile, the list of high-profile J4JA endorsers keeps growing. It might be the only area of agreement ever between Stanley Crouch and the late Amiri Baraka.

How did this breakdown occur? The original approach, amenable to both sides, was to lobby New York State to have sales tax on club admission charges redirected to the pension fund. But George Pataki, New York’s governor at the time, shot down that part of the law. Instead, in 2007, admission sales tax was rescinded by the state altogether (except in cases where cover charges and food and drink are billed together). According to Todd Bryant Weeks, Local 802’s Principal Business Representative for Jazz, this “left it to the clubs and the union to work out the details.”

Things promptly went awry. J4JA advocates, including trumpet great Jimmy Owens, argue that the club owners reneged on a promise to work out those details. Some accused the clubs of reaping a windfall from the tax repeal. A New York Times article in 2011 quoted renowned drummer Bernard Purdie: “[The clubs] are collecting that money, and they are using it for whatever reason they feel like.”

Weeks clarified and backed off this claim somewhat. “We’re not currently claiming that a club like the Blue Note is making money off the tax forgiveness,” he told me on Oct. 31. “They’re not collecting the tax and they’re not paying it to the state. … They benefited only in the sense that their customers were no longer paying the tax, but they didn’t directly financially benefit. But the Village Vanguard, for example, basically rolled that tax into the overall cover charge and still do, and they never lowered their prices. The tax was forgiven but they no longer had to pay that tax to the state. So we believe that they have benefited to the tune of somewhere in the neighborhood of $300,000 over the last seven or eight years.”

Regardless, it would seem that the sales tax repeal choked off the very revenue sought for the pension, and thus the most obvious mechanism to administer it. It’s unsurprising that the clubs, not seeing a clear way forward, walked away.

Bill Dennison, Recording Vice President of Local 802 at the time of the original push, was voted out in 2010 and replaced by John O’Connor, who “comes from a background of more conventional collective, street-based organizing,” Weeks says. “The former administration was looking at it in terms of trying to find a legislative fix. The current administration has abandoned that effort because they felt it was too complicated. Right now we’re not pushing the tax repeal as the solution, because the feeling here is that getting involved with the Department of Labor to force a determination on who is an employee is a very difficult process.”

With the sales tax battle at a dead end, Weeks says, “What we’ve been doing is going out and meeting with musicians night after night, garnering support, writing letters, seeking the support of people like Cornel West and Harry Belafonte, trying to create broader public perception about the need for this type of reform.”

But might the more in-your-face approach of recent years be impeding a workable solution? “I don’t understand the tactics that [the union] uses,” says Ron Sturm, owner of the Iridium. “They had my ear for a little while. At this point they really don’t have my ear. They have an email campaign; it’s nuisance emails from John Q. Public to the club owners.” (“I urge you to help stop the exploitation of jazz musicians,” one email begins.) “It’s a form email; they don’t know what they’re talking about. If anything, that made me bristle at the whole concept.”

In the early ’40s, when the AFM wielded far greater power, it effectively boycotted the recording industry. The scenario was similar, in a way: Columbia, RCA Victor and Decca were cutting into demand for live performance, so the AFM sought compensatory payments from these record labels in the form of a musicians’ unemployment fund. The strategy worked because the union had “density”-i.e., most working musicians were union members. “We don’t live in that world any longer,” says John O’Connor, referring to the ’40s, when “it was pretty much a homogenous kind of scene [and] everybody played the same kind of music,” and union membership was a requirement for most club work. The difference today couldn’t be starker. When I cover the AFM “recording ban” every semester in my jazz-history class at Queens College, I ask my graduate students-many of them working musicians-if they’re currently union members. I have yet to see a single hand go up.

Part of the problem, says Weeks, is that the union ceased advocating for jazz “until probably the early ’80s, when there was a reform movement within the local…” The jazz effort coalesced in the late ’90s when Jimmy Owens, Bob Cranshaw, Jamil Nasser, Benny Powell and others formed a jazz advisory committee and succeeded in organizing part-time faculty at the New School for Jazz and Contemporary Music. Other wins have followed, including union contracts with the Jazz at Lincoln Center Orchestra and the Vanguard Jazz Orchestra. Given this, an eventual agreement with New York clubs doesn’t seem outlandish.

Shane Gasteyer, the Local 802 organizer who brokered a deal in 2011 with Winter Jazzfest to set minimum payments for all musicians taking part, is forthright about the union’s larger goals. “One of the reasons it’s significant,” he says, “is that most musicians who play Winter Jazzfest have had little to no contact with the union in the past. This is an effort from 802 to do positive things and be relevant to musicians who beforehand didn’t really have any experience with how the union works or how it could be used to further their own needs and goals. We’re looking for more places to do that.”

Needless to say, most jazz musicians are not playing the Blue Note and the Vanguard, and even among those who are, the pension dollars being proposed are far from huge. “We’ve never claimed that anyone would be able to retire off of the pension contributions they received from the six major jazz clubs,” Weeks says. “That’s unrealistic. But it is a foot in the door and it is a change in perception. … It would be a way of getting union benefits and workplace protections for anywhere between 3,500-5,000 musicians who work annually at these clubs, and it would be a step in the right direction.” It could also serve as a model for efforts in other cities. O’Connor and others always make clear that musicians do not have be union members to become vested in the pension fund.

What would an agreement with the clubs look like? “What we would propose,” O’Connor states, “is a minimum scale wage … and on that wage a percentage would be applied that would equal the amount going to the pension fund. … So, as an example, if the minimum scale wage were $200 and the percentage were 10 percent, then there would be a $20 contribution.” For everyone in the band? “Yes.”

Club owners usually counter that they pay bandleaders, not sidemen, and it’s the leaders who are responsible for fair payment down the line. “We’re not proposing that that change necessarily,” O’Connor adds, “but we think there are ways to have the contribution made on the scale wages, and there could be some sort of contract between the club and the bandleader that just says, ‘I promise to pay the musicians whatever the scale wage is.'”

Weeks describes an agreement “whereby they would just simply collect the names and social security numbers of each musician that works at their club every night and make a nominal contribution to the pension fund that would be tied to a negotiated minimum scale wage.” Though he wasn’t commenting on the minimum-scale-wage issue per se, Iridium’s Ron Sturm had this to offer: “I might listen to a proposal like that. Yeah, that’s an interesting proposition. I think it’s not such a crazy demand.”

Organ trios and quartets were ubiquitous by the mid-1960s. In African American neighborhood bars and clubs up and down the East Coast, throughout the Rust … END_OF_DOCUMENT_TOKEN_TO_BE_REPLACED

Terence Blanchard looked around the restaurant table and launched into a gentle sermon about jazz education in Detroit that was part homily, part pep talk, … END_OF_DOCUMENT_TOKEN_TO_BE_REPLACED

Creating a program of solo piano music is the ultimate challenge for any improvising pianist. The music on my latest album, Ways of Disappearing (Sunnyside), … END_OF_DOCUMENT_TOKEN_TO_BE_REPLACED

First the good news: As you can see in our annual Festival Guide, there are plenty of jazz festivals scheduled to happen around the world … END_OF_DOCUMENT_TOKEN_TO_BE_REPLACED