Skip to content
Become a member and get exclusive access to articles, live sessions and more!
Start Your Free Trial
Home > Features > The Heather on the Air 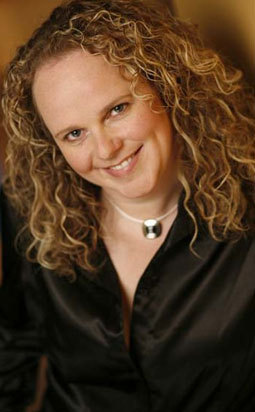 If you’re a fan of John Pizzarelli and Jessica Molaskey’s Radio Deluxe and Judy Carmichael’s Jazz Inspired, then there’s another wonderfully eclectic program featuring a multitalented jazz vocalist that you need to add to your regular radio schedule. It is called simply Sunday Afternoon Jazz, hosted by Newfoundland-born chanteuse Heather Bambrick, airing Sundays from noon to four (EST) on Toronto-based JAZZ-FM (and globally accessible online at www.jazz.fm).

Blessed with a bubbly personality comprised of equal parts sunshine and sass, the on-air Bambrick is as quick-witted as she is charming. But she is no lightweight. Her knowledge of jazz is as intense as her respect for its practitioners. The focus of her show is primarily, though not exclusively, vocalists. Her all-embracing playlist will, on any given Sunday, extend from Ella and Sarah to Robin McKelle and Raul Midón, with plenty of elbowroom for the occasional Metheny, Mehldau or Motian track.

A natural-born storyteller, Bambrick weaves engaging tales of her own domestic and professional adventures, including plenty of lively, down-home yarns, with stories of her jazz community pals (particularly her good chum, fellow Canadian vocalist Emilie-Claire Barlow) and insightful tidbits about the music and musicians to stitch together a vibrant, four-hour jazz crazy quilt.

A graduate of the University of Toronto’s Jazz Studies program (where she now serves as an instructor), Bambrick was lead soloist for the university’s Vocal Jazz Ensemble. The ensemble recorded a widely acclaimed album in 1997 and was, that same year, named Outstanding College Vocal Group by Downbeat. After graduation, she became a founding member of the jazz-pop Beehive Singers, touring the world with the group for several years, performing alongside the likes of Carol Welsman and New York Voices’ Damon Meader and playing a central role in their eponymous debut album in 1999. Concurrent with her work with the Beehive Singers, Bambrick began her radio career as a regularly featured performer on the CBC’s ever-popular Vinyl Café. She can also be heard on various film and TV soundtracks, and remains in constant demand as a voice actor for commercial work.

Perhaps it’s her Canadian humility at play, but Bambrick rarely includes cuts from her own albums on Sunday Afternoon Jazz. Which is a shame. Over the past few years, she has recorded two excellent solo discs and a third with actor/vocalist Rudy Webb. 2003’s It’s About Time offers a diverse assortment of tunes, showcasing the various facets of Bambrick’s musical personality to excellent advantage. She opens with a “(Sing) Joyspring” as explosively colorful as fireworks, handles such wide-ranging standards as “Love for Sale,” “I’m Going to Sit Right Down and Write Myself a Letter” and “That’s All” with the easy assurance of Nancy Wilson, and examines both heartache and glee with kindred intensity on the back-to-back originals “How Come U Don’t Call Me Anymore?” and “Aren’t I Cute?” Then, at album’s end, the lass whose heart will forever remain in St. John’s embraces the quiet, natural magnificence of her native land with the lullaby-tender “Let Me Fish Off Cape St. Mary’s.”

2006’s Those Were the Days is a like-minded mélange, with a heavier dose of standards. The title track, rarely sung in full, is the Charles Strouse/Lee Adams theme from All In the Family, accented with one clever lyrical change from Bambrick, who substitutes “Keely Smith” for “Kate Smith.” It makes absolute sense, of course, that she opts to include Lerner and Loewe’s hazy “The Heather on the Hill,” and it serves as an ideal companion to her dreamy reading of “Oh, What a Beautiful Mornin’.” But the standout track is a lilting rendition of Noel Coward’s “A Room with View,” warm and inviting as a Jamaican breeze.

On last year’s This Is Love with Webb, only two of the dozen tracks are Bambrick solos, including a cunningly buoyant “Always” and a shimmering “Don’t Look Now.” Which leaves plenty of room for her and Webb to demonstrate their delightful, honey ‘n’ thistle compatibility. They unite on a petal-soft, molasses-slow “They Say It’s Wonderful” and a “Someone” that progresses from murky shadows to blue-skied brightness, but the collision of Webb’s sandpaper and Bambrick’s sunshine reaches its enticing peak on a sexy, swirling “Change Partners.” She can also be heard on vocalist Ori Dagan latest, S’Cat Got My Tongue, teaming with Dagan for a percolating “Swing’s the Thing.”

Nor, is Bambrick’s the only notable program on JAZZ-FM. Station President and CEO Ross Porter has, over the years, honed a seven-day schedule chockablock with superb hosts and shows. Porter’s own “Music to Listen to Jazz By” (Saturday mornings, 9am-noon EST) provides a cornucopia of new, classic and rare material. A walking encyclopedia of jazz, the personable Porter is also author of the bestselling The Essential Jazz Recordings: 101 CDs. Porter’s second-in-command, cognac-voiced Brad Barker, ushers in weeknight evenings (6-9pm EST) with his impeccably elegant “Dinner Jazz.” Latin jazz is the Saturday afternoon (4-6pm EST) focus of vocalist/songwriter Laura Fernandez’s “Café Latino, and the blues get their due later on Saturdays (8pm-midnight EST) on Danny Marks’ “BLUZ-FM.” Other weekend highlights: Dani Elwell’s cozy “The Morning” (Saturdays and Sundays, 6-9am EST); David Basskin’s “Stolen Moments” (Fridays 10pm-1am EST), veering out of the mainstream to focus on obscure recordings and emerging artists; bandleader and raconteur Jaymz Bee’s effervescent “Jazz In the City” (Saturdays 6-8pm EST); and the granddaddy of all JAZZ-FM programs, Sunday night’s five-hour (5-10pm) “Big Band Show” hosted for more than three decades by the incomparably knowledgeable Glen Woodcock, who draws extensively from his vast private library of band recordings.

Justly lauded as one of the world’s great radio stations by Business Week, JAZZ-FM’s programming is accessible 24/7 via the website (again, www.jazz.fm). It is also, in and of itself, a terrific site, loaded with jazz news, podcasts, artist interviews, details about new CD releases, a Toronto-and-area event and concert calendar and an extensive Canadian Jazz Archive.

It’s also worth noting that JAZZ-FM subsides solely on a limited amount of advertising revenue and listener donations (solicited primarily via twice-annual membership drives). No government funding; no corporate handouts. And, working within so circumscribed a budget, Porter not only delivers exemplary programming, but also finances extensive jazz outreach and education programs.

If you’d like to share your comments about Heather Bambrick or JAZZ-FM or have ideas for future installments of Hearing Voices, you can reach me at [email protected]

Terence Blanchard looked around the restaurant table and launched into a gentle sermon about jazz education in Detroit that was part homily, part pep talk, … END_OF_DOCUMENT_TOKEN_TO_BE_REPLACED

Creating a program of solo piano music is the ultimate challenge for any improvising pianist. The music on my latest album, Ways of Disappearing (Sunnyside), … END_OF_DOCUMENT_TOKEN_TO_BE_REPLACED

First the good news: As you can see in our annual Festival Guide, there are plenty of jazz festivals scheduled to happen around the world … END_OF_DOCUMENT_TOKEN_TO_BE_REPLACED

Steve Lacy was once a brilliant bebop player. Yet conventional wisdom says the opposite. Many have long argued that a key to the innovative soprano … END_OF_DOCUMENT_TOKEN_TO_BE_REPLACED