Skip to content
Become a member and get exclusive access to articles, live sessions and more!
Start Your Free Trial
Home > Features > The Gig: The Timeless Tony Bennett, Then As Now 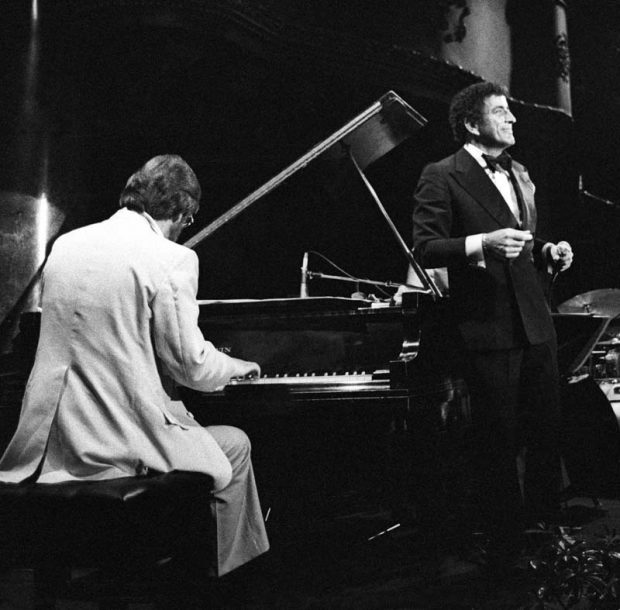 Tony Bennett sings the title track of his new album, The Silver Lining: The Songs of Jerome Kern (RPM/Columbia), as a literal valediction, a parting word to the faithful. He’s accompanied on piano by both Bill Charlap, with whom he shares an artist credit for the album, and Renee Rosnes, Charlap’s partner by marriage. “Look for the Silver Lining” is the full name of the song, which they negotiate in an oratorical cadence, with softly glowing chords and a chromatic key change about halfway through. There’s a delicate improvised piano interlude but the focus remains fixed on Bennett, who takes evident care in his enunciation of the lyrics, as if to lift them from idiomatic cliché into a realm of moral authority, or maybe just accumulated wisdom.

Bennett is now 89. He’s been a popular singer since the early 1950s, with some ups and downs, and a force in jazz for just as long. Over the last two decades, following a turn on MTV Unplugged that brought him back into mainstream circulation, he has been the perfect embodiment of an ongoing dialogue between jazz and classic pop: the grand old gent of the Great American Songbook, agreeably single-minded in purpose. His albums in this century have generally involved complex logistics and synergistic outreach, to fellow vocalists ranging from k.d. lang to B.B. King. With Duets II, released in 2011, Bennett became the oldest living artist ever to top the Billboard album chart-surprisingly, his first time at No. 1. Last year he did it again with Cheek to Cheek, his marquee collaboration with Lady Gaga, which led to a barnstorming world tour.

I saw the first public performance by Bennett and Gaga, the same glittery concert later edited for broadcast on PBS. We can debate the relative merits of Gaga’s jazz singing, as they say, some other time. What struck me in the moment was the gulf between her frantic showbiz heat and his courtly brand of cool. In other words, these two powerful singers were working across more than a 60-year age gap; they were expressing two ideals of performance almost diametrically opposed. That the allegiance mostly worked was testament to their unforced mutual regard, and to the sturdiness of the songbook itself. Still, watching the old romantic stoic beside the young volcanic trouper left a faintly discordant impression, and it seems telling that Lady Gaga’s next move wasn’t an album of any sort but rather a starring role in the surreally kinky FX series American Horror Story: Hotel.

By happy contrast, The Silver Lining represents both business-as-usual for Bennett and, poignantly, a reflection on his own musical past. It’s a low-muss, no-fuss production that could easily have been conceived as an antidote to recent spectacle, or at very least a recalibration. Bennett is far too circumspect a fellow to put it that way himself, but you can read between the lines of “I Won’t Dance.” As performed with Gaga, especially onstage, that tune was a boffo set piece, a charade of coy demurral. In the company of Charlap and his trio, with Peter Washington on bass and Kenny Washington (no relation) on drums, it glides along in waltz time, with a vocal delivery neat as a pocket square. This, Bennett seems to be implying, is how we roll.

The album is a bouquet of songs he has been finessing throughout his career, like “The Way You Look Tonight.” (He first recorded that in 1958 for his album Long Ago and Far Away, whose title track turns up here, too.) More significant, this year marks the 40th anniversary of The Tony Bennett/Bill Evans Album, one of the most cherished titles in Bennett’s vast discography. So there’s resonance in his move toward a voice-and-piano format, despite the occasional assist from Rosnes or the rhythm section. Charlap even ventures what I presume is a deeply self-conscious emulation of Evans’ pianism, starting with the opening track, “All the Things You Are.” (Ed. Note: For more on the Bennett-Charlap axis, read the pianist’s guest Chops column on playing for singers in this issue.)

The Complete Tony Bennett/Bill Evans Recordings, issued by Concord as a double CD in 2009 and a four-LP box set last spring, is a vibrant reminder of how rare and sterling that partnership was. Comprising the first Bennett-Evans session in 1975 as well as a reunion the following year, which yielded the album Together Again, it’s a gemlike study in ballad singing and empathic accompaniment, with exceptional sound quality and a trove of alternate takes. Evans was a more florid stylist than Ralph Sharon, Bennett’s longtime pianist, but he adapted beautifully to the format. And it’s fascinating to consider the range of their repertoire, which ran from exalted fare to lesser fluff, with a few songs (notably Evans’ “Waltz for Debby”) becoming jazz-vocal standards only later, as a direct result.

That Bennett chose to focus his new album on a single composer is understandable-and hardly a restriction, given the quantity and quality of Kern’s output. What’s truly striking is the dauntless bounce in his phrasing, among the other ways he still sparkles as a vocalist. Age has constricted his range and brought a light rasp to his tone, but he has also made it a crucial facet of his artistry. To hear him sing “The Last Time I Saw Paris” or “Long Ago (and Far Away)” here is to consider the pain nestled deep within nostalgia. And this version of “Yesterdays” has the quietly riveting pathos of a monologue for the stage. Elsewhere Bennett devises workarounds: He’ll deliver one line with a chuckle, and another in a barker’s pitch, like Jimmy Durante. When he declares his love, on a song like “They Didn’t Believe Me,” there’s no room for doubt. Like his old pal Frank Sinatra, Bennett makes his delivery feel like something other than a performance.

As I recently noted here, we’re living in a year of centennial tribute to Sinatra and Billie Holiday, whose vocal trademark may be the secret key to understanding Bennett’s. (He made an album called Tony Bennett on Holiday in 1997, but the best evidence I can offer is a track with Evans: “We’ll Be Together Again,” especially during the bridge.) It’s mind-boggling to consider that Bennett, a near-contemporary of both Holiday and Sinatra, is still making music that’s not only acceptable but compelling and vital. To that end, it’s fitting that the album wasn’t named “I’m Old Fashioned,” even if that track is a sauntering highlight, and its sentiment rings true. “Remember, somewhere the sun is shining,” Bennett sings on “Look for the Silver Lining,” and his willful optimism, in the face of whatever darkness, feels as much like a behest as a gift.

Organ trios and quartets were ubiquitous by the mid-1960s. In African American neighborhood bars and clubs up and down the East Coast, throughout the Rust … END_OF_DOCUMENT_TOKEN_TO_BE_REPLACED

Terence Blanchard looked around the restaurant table and launched into a gentle sermon about jazz education in Detroit that was part homily, part pep talk, … END_OF_DOCUMENT_TOKEN_TO_BE_REPLACED

Creating a program of solo piano music is the ultimate challenge for any improvising pianist. The music on my latest album, Ways of Disappearing (Sunnyside), … END_OF_DOCUMENT_TOKEN_TO_BE_REPLACED

First the good news: As you can see in our annual Festival Guide, there are plenty of jazz festivals scheduled to happen around the world … END_OF_DOCUMENT_TOKEN_TO_BE_REPLACED