Skip to content
Become a member and get exclusive access to articles, live sessions and more!
Start Your Free Trial
Home > Features > The Gig: Mostly Other People Do the Killing’s Controversial Miles Remake 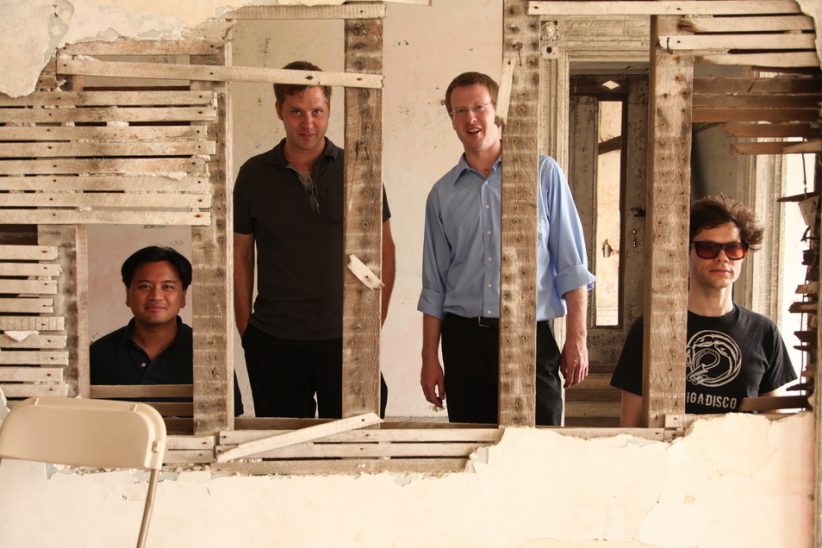 Mostly Other People Do the Killing, backstage at 2011 Newport Jazz Festival 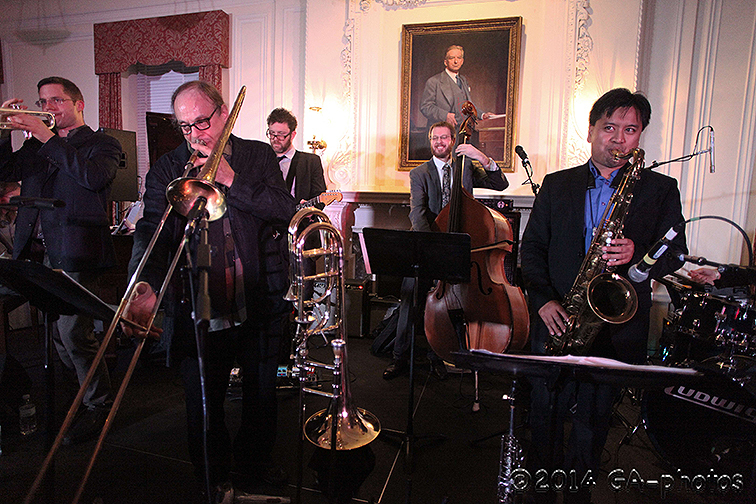 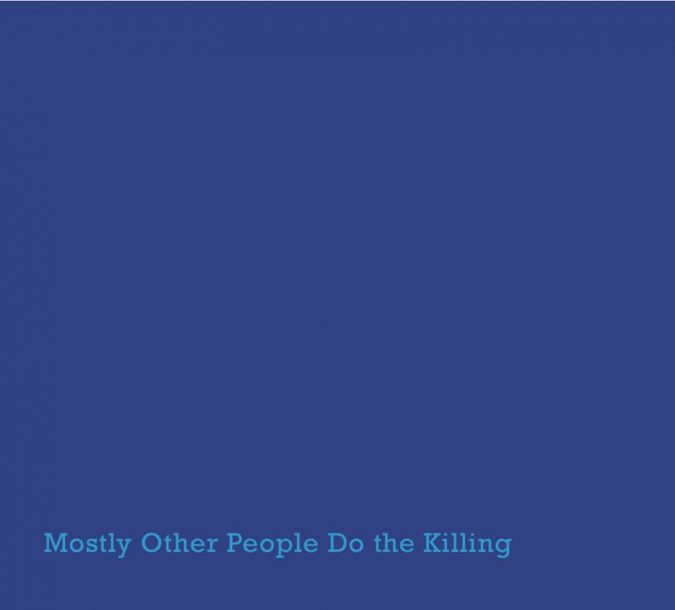 Mostly Other People Do the Killing's "Blue" album 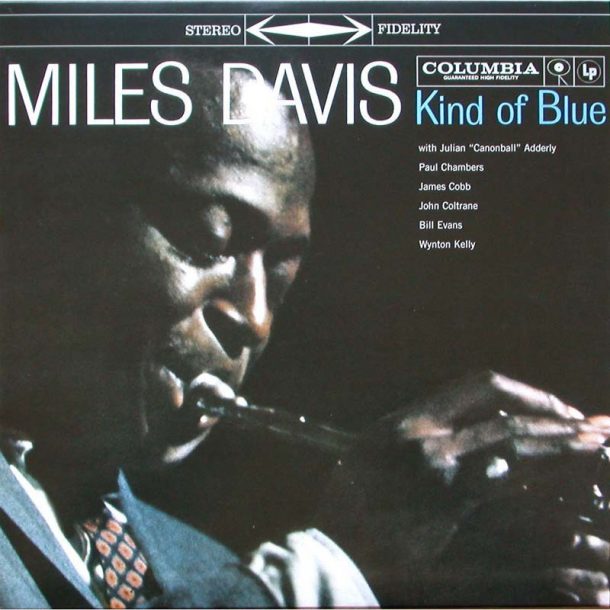 There is a Japanese visual art in which the artist is forced to be spontaneous. He must paint on a thin stretched parchment with a special brush and black water paint in such a way that an unnatural or interrupted stroke will destroy the line or break through the parchment. Erasures or changes are impossible. These artists must practice a particular discipline, that of allowing the idea to express itself in communication with their hands in such a direct way that deliberation cannot interfere.

You’re probably aware, astute reader, that the above text constitutes the first paragraph of Bill Evans’ liner notes to Kind of Blue, the immortal Miles Davis album from 1959. Reprinting it like so, without quotation marks or preamble, seemed the only fitting way to open this column, devoted as it is to Blue, an ingenious and preposterous new album by Mostly Other People Do the Killing. The latest in a series of sharply antic releases on bassist Moppa Elliott’s Hot Cup Records, it’s a painstakingly realized, note-for-note recreation of Kind of Blue. Close enough to the original article to hoodwink even a seasoned listener (go ahead, try it at home), the album is about as far from Evans’ articulated ideal of spontaneous mastery as a Buick Regal is from a bonsai tree.

For anyone familiar with the roughly decade-long trajectory of Mostly Other People Do the Killing-at its core a quartet with Elliott on bass, Peter Evans on trumpet, Jon Irabagon on saxophones and Kevin Shea on drums-this latest provocation should seem true to form. MOPDtK has made a habit of smartly hijacking jazz conventions. Whatever your gut feeling about their act-those deadpan nods to iconic album covers, that gleefully curdled air of lunatics running the asylum-it was always clear that they had a point to make about received wisdom in jazz culture. It was also apparent that they backed up their bluster with a hardcore musical command.

All of which brings us back around to Blue and the most interesting question around it, which is “Why?” The band leaves a puckish clue in the form of a CD booklet-not a reprint of Evans’ Asiatic rumination, but a 1939 short story by the intellectually frisky Argentine writer Jorge Luis Borges. First published in English in ’62, with the title “Pierre Menard, Author of the Quixote,” it’s a bedrock text of postmodern literary theory, an examination of the very essence of authorship and meaning. In brief, it concerns a fictional writer who has, for complicated reasons, set out to compose whole sections of Miguel de Cervantes’ Don Quixote as if they were his own. “I have assumed the mysterious obligation to reconstruct, word for word, the novel that for him was spontaneous,” Menard is said to have declared.

Borges’ narrator, appraising this (ahem, cough) quixotic endeavor as “a task of infinite complexity, a task futile from the outset,” nevertheless hails it as a visionary act, partly because of its intentionality and partly because of Menard’s place in time. Recreating Don Quixote, a 17th-century canonical text, meant not only a conscious affectation of its antiquated style but also a challenge to his own historical view of the world, not to mention his context for the work itself: “The Quixote, Menard remarked, was first and foremost a pleasant book; it is now an occasion for patriotic toasts, grammatical arrogance, obscene deluxe editions. Fame is a form-perhaps the worst form-of incomprehension.”

At this point, we should all be able to draw the connection to Kind of Blue, a consensus masterpiece of recorded jazz, so valorized that it’s almost impossible to see clearly. Among its obscene deluxe editions, to borrow Borges’ wonderfully tart line, is a 50th anniversary box set on Columbia/Legacy, consisting of two CDs, a DVD and a 180-gram LP on blue vinyl, along with a glossy booklet, poster and mock-memorabilia (e.g., a reproduction of Evans’ liner notes, hand-scrawled in tidy blue cursive).

Embracing the irony, I recently put that blue LP on my turntable and Blue in the CD carousel, and simultaneously cued up both versions of “All Blues,” toggling between them every five seconds or so. The verisimilitude was stunning. At one point during the alto saxophone solo, I lost track: Was that Irabagon or Cannonball Adderley? I had some analogous moments with Evans’ poignantly Milesian intonation and with Shea’s drumming, which seemed to capture Jimmy Cobb down to the last grace note. As in the Borges story, what inspired my awe was the immaculate retracing of something that had originally been conjured whole.

Given that the improvisations on Kind of Blue have become, through a convergence of reputation and repetition, as familiar as many a well-known composition, it’s a clever trick to treat them as such. Still, nailing a transcription is one thing; Blue belongs to another order of accomplishment. We’ve heard endless tributes to Davis’ epochal album, but never one that so skillfully captures its aura, and flips the whole notion of tribute on its head. Listen carefully and you’ll catch the imperfections-say, how pianist Ron Stabinsky, who does a strikingly real Bill Evans, sounds shakier doing Wynton Kelly. But that’s beside the point.

What is the point, really? For me, it’s that an album so singular in the jazz imagination can in fact be credibly remade by musicians a world apart from Davis and his crew. Maybe that sounds cold and demystifying, but I found it strangely comforting. We in the jazz world often fret about whether young musicians are truly absorbing the language. Here’s your proof. In some appreciable way, they even helped me hear the old album anew. Returning to the metaphor of a line drawn on parchment, I’ll let Borges write my kicker: “I have reflected that it is legitimate to see the ‘final’ Quixote as a kind of palimpsest, in which the traces-faint but not undecipherable-of our friend’s ‘previous’ text must shine through.”

Organ trios and quartets were ubiquitous by the mid-1960s. In African American neighborhood bars and clubs up and down the East Coast, throughout the Rust … END_OF_DOCUMENT_TOKEN_TO_BE_REPLACED

Terence Blanchard looked around the restaurant table and launched into a gentle sermon about jazz education in Detroit that was part homily, part pep talk, … END_OF_DOCUMENT_TOKEN_TO_BE_REPLACED

Creating a program of solo piano music is the ultimate challenge for any improvising pianist. The music on my latest album, Ways of Disappearing (Sunnyside), … END_OF_DOCUMENT_TOKEN_TO_BE_REPLACED

First the good news: As you can see in our annual Festival Guide, there are plenty of jazz festivals scheduled to happen around the world … END_OF_DOCUMENT_TOKEN_TO_BE_REPLACED