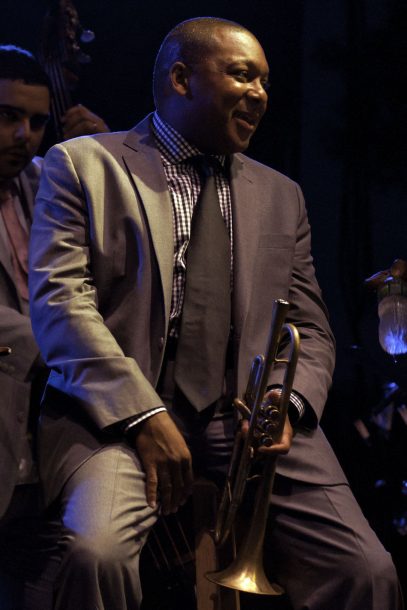 One afternoon some years back, I found myself looking over a printout of events presented by Jazz at Lincoln Center. This would have been just a routine bit of research, except for the fact that I was standing in the elegant Manhattan apartment of the organization’s artistic director, Wynton Marsalis, who’d brandished the document to prove a point. “Every year, I hear about a departure,” he said with a long-suffering air, responding to my suggestion that Jazz at Lincoln Center’s 2006-07 season, which was set to include one concert by Joe Zawinul and another featuring Cecil Taylor and John Zorn-rule-defying artists, no doubt-implied a widening of programmatic scope.

“That’s two gigs,” Marsalis pointed out. “We’ve produced 900 original concerts in the New York area. If you produced all that and someone told you, ‘Man, these two gigs are a departure,’ what would you think about that? Honestly? It would seem almost insulting or something.” He stabbed the printout with an index finger. “These 900 concerts, I see all kinds of names. None of them count? This never happened?”

I thought back to that exchange recently, after the announcement of Jazz at Lincoln Center’s 2013-14 season. Beginning in mid-September with a spotlight engagement by the magisterial pianist Ahmad Jamal, the season contains a good deal of stuff that any veteran observer would recognize as classic Jazz at Lincoln Center: neatly refurbished Ellingtonia; spiffy American songbook cabaret; repertory nods to Dave Brubeck (in memoriam) and Hugh Masekela (at 75); ambitious works from the Marsalis canon, and by in-house talent like saxophonist and clarinetist Victor Goines. Not many jazz outfits on the planet can sustain even a sliver of this activity in one season, which is why the world looks to Marsalis and his institution as a lodestar, some folks raising a glass and others shaking a fist.

If you know anything at all about Jazz at Lincoln Center, you probably know its harshest critique, which is that the organization combines the traits of a mausoleum and a citadel, fetishizing jazz’s history and freezing out its current reality (barring the occasional Wyntonian exception). Put simply, this is the perception of conservative bias, with all the baggage such a charge entails. Marsalis, for one, won’t hear any of it: He’s been steadfast in his rejection of the premise. His detractors have shown a similar stubbornness of conviction, damning the institution to starchy irrelevance even in the face of certain countervailing facts. So where does the answer truly lie? My own position has long been that critics of Jazz at Lincoln Center don’t give it enough credit in this regard, and that Wynton takes too much.

Some recent developments led me to revisit this position. In January, I attended the grand opening of the SFJAZZ Center, a sleek $64-million facility that can be understood, in reductive terms, as a West Coast answer to Jazz at Lincoln Center’s Frederick P. Rose Hall. During my visit I met with Randall Kline, that organization’s executive artistic director, whose programming philosophy has long suggested a more permissive notion of jazz than the one proselytized by Marsalis. SFJAZZ’s current season has featured jazz legends like vibraphonist Bobby Hutcherson, but also emissaries like Mariza, the Portuguese fado singer, and sub-series curated by five resident artistic directors, including pianist Jason Moran and guitarist Bill Frisell.

So here’s where things get interesting. Jazz at Lincoln Center’s upcoming season has its own global crossover fare: a breakout unit from Pakistan (Sachal Jazz Ensemble), and colaboradores con clave from Spain (Tomatito) and Cuba (Orquesta Buena Vista Social Club). It has marquee concerts by the likes of drummer Jack DeJohnette, saxophonist Joshua Redman, pianist Vijay Iyer and composer Maria Schneider. It has a handful of other contemporary pacesetters like guitarist Kurt Rosenwinkel, taking the Jazz at Lincoln Center Orchestra for a spin. It even has a three-concert series organized by Frisell, including one celebration of pre-Tin Pan Alley song that will feature Moran. “It definitely seems like they’re opening wider and wider the view of American music and jazz in general,” Frisell said, after disclaiming that musical labels always made him nervous. “I’m really thrilled that they asked me to do it. Twenty years ago it would have been much more unusual for something like this to happen there, I think.”

If you were seeking to identify an agent of change at Jazz at Lincoln Center, the leading candidate would be Jason Olaine, who became its director of programming last summer, after a stint with the Newport Jazz Festival. “We’re hoping to be able to explore some of the areas of jazz that we haven’t delved into deeply in the past,” Olaine told me recently. Higher up the chain is Greg Scholl, who became the organization’s executive director last June. Scholl, who has history in digital media, prioritized the development of JALC webcasts, opening access to viewers worldwide. (During a six-month pilot program, there were 42,000 visitors from 144 countries.)

If it’s fair to peg these developments as an overture to a younger base-the audience that hasn’t typically flocked to Jazz at Lincoln Center productions, but will be essential to the organization’s future-only time and ticket sales will gauge their success. In any case, it’s hard not to detect a touch of defensiveness in the new season’s slogan, “All jazz is modern.”

How easy, on the other hand, to picture those words uttered by Marsalis. “It isn’t that I don’t believe in innovation,” he told me that afternoon, half a dozen years ago. “But I don’t believe that going away from who you are is an innovation. I believe that it’s a mistake.” Swing, he said, was the organization’s “bread and butter.” I’d suggest that it still is, and to good effect, even if there’s a lot of other stuff now on the table.

Organ trios and quartets were ubiquitous by the mid-1960s. In African American neighborhood bars and clubs up and down the East Coast, throughout the Rust … END_OF_DOCUMENT_TOKEN_TO_BE_REPLACED

Terence Blanchard looked around the restaurant table and launched into a gentle sermon about jazz education in Detroit that was part homily, part pep talk, … END_OF_DOCUMENT_TOKEN_TO_BE_REPLACED

Creating a program of solo piano music is the ultimate challenge for any improvising pianist. The music on my latest album, Ways of Disappearing (Sunnyside), … END_OF_DOCUMENT_TOKEN_TO_BE_REPLACED

First the good news: As you can see in our annual Festival Guide, there are plenty of jazz festivals scheduled to happen around the world … END_OF_DOCUMENT_TOKEN_TO_BE_REPLACED