Skip to content
Become a member and get exclusive access to articles, live sessions and more!
Start Your Free Trial
Home > Features > The Gig: Lee Konitz at Newport 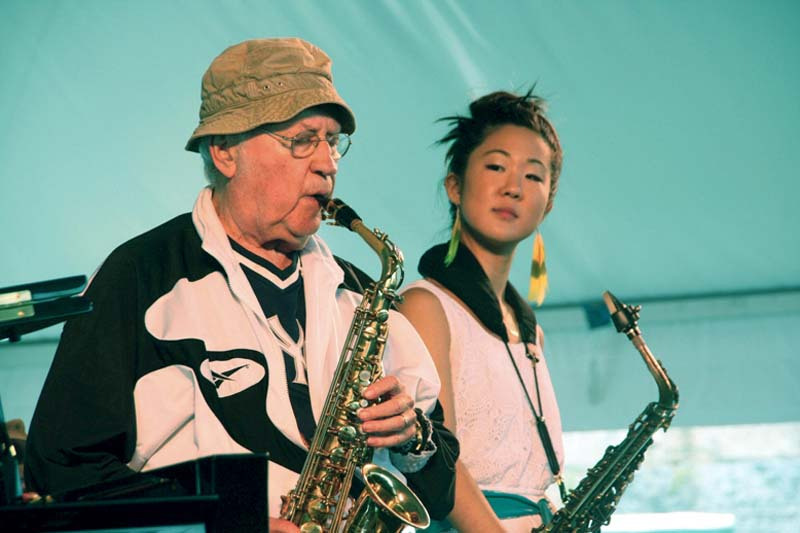 “I chose to play some correct notes in that solo, and some incorrect ones, so I hope you’ll forgive me,” Lee Konitz said onstage at the Newport Jazz Festival in August, wry and unassuming in his rumpled warm-up jacket and khaki bucket hat. “It’s all in the spirit of improvisation.” His audience, gathered around the smallest of three stages at Fort Adams State Park, answered with an appreciative mix of laughter and applause. Then Konitz, armed with his alto saxophone and his rhythm section, was on to the next tune.

As you may have heard, the Newport Jazz Festival marked its 60th anniversary with due ceremony, and more than a few remarkable performances. But in the festival’s immediate afterglow, the set I keep thinking about was in many ways an unremarkable performance. I believe that says something about Konitz, his steadfast career as a jazz modernist, and the high standard to which he so routinely aspires.

Konitz, 86, played the first Newport Jazz Festival, in a quartet led by pianist Lennie Tristano. He’s pretty close to the only working musician left who can claim that distinction. Not much was made of this fact during Konitz’s midday Sunday set, with a superbly sensitive quartet featuring Dan Tepfer on piano, Jeremy Stratton on bass and George Schuller on drums-and, after several leisurely tunes, the addition of a guest, the celebrated young alto saxophonist Grace Kelly.

But it’s worth considering a few loose parallels between Konitz and the festival at Newport, each of which hit its stride in the ’50s; responded with a stubborn poise to big changes in the culture; and maintained a clear identity through affiliations old and new. Having worked on the autobiography of George Wein, founder and producer of the festival, I know that he booked Konitz often at his Boston nightclub, Storyville. Lacking any documentation of the Tristano-Konitz appearance at Newport in ’54, I’ve long turned to Jazz at Storyville, an excellent Konitz album recorded earlier that year, and released on Wein’s boutique Storyville Records. (The pianist on that date was Ronnie Ball, an acolyte of the Tristano School. Good enough.)

Konitz was a known entity in progressive circles by then, having worked with the Claude Thornhill Orchestra as well as a Miles Davis nonet later immortalized on the Capitol album Birth of the Cool, and the edition of the Stan Kenton Orchestra that released, also on Capitol, the stentorian statement New Concepts of Artistry in Rhythm. But of course it was Konitz’s close association with Tristano, a figure of cult admiration even then, that defined his path through the 1950s. Though aligned with bebop, and Charlie Parker in particular, when it came to harmonically advanced annotation of standard themes, Tristano was more emphatic about the purer principles of improvisation—no rote phraseology, no clichés—and less concerned with rhythmic dynamism. Konitz took these ideas and absorbed them into his own style, congruent with the Tristano School but ultimately not beholden to it. His turn at Newport this year bore out the point.

Not to imply that there wasn’t a touch of Tristano: Kelly, ever the eager pupil, had asked Konitz whether they could play one of the master’s tunes. So they opened her portion of the set with “317 East 32nd Street,” named after the address of the rehearsal studio, above an auto shop, where Tristano had his headquarters in the ’50s. Based on the changes for “Out of Nowhere,” the tune begins with an obliquely slippery melody for two saxophones, originally Konitz and his tenor counterpart, Warne Marsh. Kelly had no trouble fitting into this matrix, carefully blending her tone with Konitz’s for a unison line that occasionally splintered off into crystalline harmony.

But with all due respect to Kelly and her punctilious execution, I was drawn more to Konitz’s first few guestless tunes: “Stella by Starlight,” “All the Things You Are” and “Body and Soul,” each a mainstay in his playbook. I’ve heard some folks carp about the lack of variety in Konitz’s repertoire, but I see it as an emblem of self-challenge-a strict poetic form against which he squares his creative license. I’ve heard Konitz play “Stella by Starlight” in person at least a dozen times, but not like he did at Newport, with his phrases wheeling slowly toward resolution. At one point he took the saxophone mouthpiece out of his mouth but continued his improvisation, with an off-mic scat vocal just barely audible to those at the back of the tent.

If you’ve followed Konitz on record in recent years, you know he does a little scatting on Costumes Are Mandatory, a recent HighNote release with pianist Ethan Iverson, bassist Larry Grenadier and drummer Jorge Rossy. But the reappearance of “ooh-ba-dee ba-dee” syllabics in “All the Things” signaled that Konitz wasn’t goofing; he was using his voice as a small disruptive strategy, a spur to sharper listening. His band supported him with an extravagant level of attention, led by Tepfer, who comped as well as any pianist I’ve heard behind him, furnishing the silence between phrases with subtly shaded chordal filigree.

I took in the set from one side of the tent, standing on the periphery. At one point a guy seated in front of me took out an iPad and pulled up the Lee Konitz entry on Wikipedia, shaking his head as he scrolled down the discography section for what seemed like an eternity. This was in keeping with the spirit of the set, a kind of magical mundane.

“I saw a lovely yacht going by in the middle of that tune,” Konitz said just after “Stella,” adding, “It was distracting a little bit, but beautiful.” He went on to say something that could probably apply to most of the gigs on his ledger in the last 60 years: “We’re going to play about a half-dozen tunes, and then roll on someplace else.”

Organ trios and quartets were ubiquitous by the mid-1960s. In African American neighborhood bars and clubs up and down the East Coast, throughout the Rust … END_OF_DOCUMENT_TOKEN_TO_BE_REPLACED

Terence Blanchard looked around the restaurant table and launched into a gentle sermon about jazz education in Detroit that was part homily, part pep talk, … END_OF_DOCUMENT_TOKEN_TO_BE_REPLACED

Creating a program of solo piano music is the ultimate challenge for any improvising pianist. The music on my latest album, Ways of Disappearing (Sunnyside), … END_OF_DOCUMENT_TOKEN_TO_BE_REPLACED

First the good news: As you can see in our annual Festival Guide, there are plenty of jazz festivals scheduled to happen around the world … END_OF_DOCUMENT_TOKEN_TO_BE_REPLACED