Skip to content
Become a member and get exclusive access to articles, live sessions and more!
Start Your Free Trial
Home > Features > The Gig: Laurie Frink 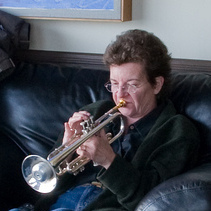 Some jazz musicians wield a significance far greater than the conventional benchmarks of achievement-solo discographies, headline engagements, awards and honors-would seem to suggest. Laurie Frink, who died on July 13 at 61, after a long struggle with cancer, was emphatically one of these.

A trumpeter who found her place in the music as a crackerjack section player, she never released an album under her own name. But she was an essential fixture in the Maria Schneider Orchestra and several other state-of-the-art big bands, notably the John Hollenbeck Large Ensemble and Darcy James Argue’s Secret Society. And for more than one generation of trumpeters who sought her counsel, she fell somewhere between a sideline coach and a mountaintop guru, with maybe a wry touch of the stand-up comic. It’s for her contribution as a mentor and instructor that Frink will probably be best remembered, but there’s no category for that in the critics’ polls.

“I take very seriously my role as someone who is, just by age, old enough to be an adult figure to young men and women of college age,” Frink told me a couple of years ago, when I was writing a profile of Ambrose Akinmusire, one of her former students at the Manhattan School of Music. “They need someone besides teachers they don’t know very well, or their parents. I teach in my studio that’s in my home, and it’s one on one for an hour a week, 14 lessons each semester. That’s a lot of time, so I keep an eye on my kids.” The term they often used to describe her, she added, was “trumpet mom.”

As it happens, I had indirect exposure to Frink’s cultivation about a dozen years ago, when my roommate in Lower Manhattan, Jesse Neuman, was one of her dedicated students. As an inveterate liner-note scrutinizer, I was familiar with Frink’s name but not much more than that. Before long I got to know a lot about her methods-including a daily ritual of etudes and exercises that she typically assigned, complete with a monotonous foot-tapping cadence. (Even in a prewar apartment, the walls are thin.)

Frink had an impressive career as a trumpeter long before she got into teaching, and clearly she made some sacrifices along the way. Born in Pender, Nebraska-a town of barely more than 1,000 people, then as now-she grew up in circumstances that those close to her describe as difficult. The first truly supportive adult she seems to have encountered was Dennis Schneider, the principal trumpeter with the Lincoln Symphony Orchestra, with whom she studied at the University of Nebraska. Later, after she moved to New York, she met Carmine Caruso, who was revered among brass players for his pragmatically intuitive way of dealing with embouchure. They were romantically involved for 14 years, and after his death in 1987 she became the main exponent of his teaching method, which she gradually modified into her own.

During that time, Frink was also building her professional reputation, working on Broadway and with the Benny Goodman Orchestra, among others. (Her recording credits from the late ’80s include albums by Bob Mintzer, David Bowie and Talking Heads.) “She was one of the best trumpet players that has ever been,” said John McNeil. “We all knew it at the time. You want something difficult played well, call Laurie.”

McNeil, who played alongside Frink in the trumpet section of Gerry Mulligan’s Concert Jazz Band, later became one of her success stories as a technical guru. “She rebuilt my playing twice, and basically saved my career,” he said, referring to a neuromuscular disease that threatened to unravel his ability to play the horn. Frink studied his problems and devised exercises to help address them. At some point, seeing dramatic results, McNeil urged her to start writing down her notes. Bit by bit, their collaboration added up to a method book, Flexus: Trumpet Calisthenics for the Modern Improviser, which has become a standard text for trumpet players since its publication a decade ago.

Among elite professional brass players, Frink became known as a fixer, someone who could quickly diagnose a problem and prescribe a no-bullshit solution. Dave Douglas, who had studied with Caruso before he met Frink, credits her with saving his embouchure on more than one occasion. “You’d go in thinking, ‘This is a disaster, I’ll never be able to play the horn again,'” he said of her lessons, “and go out thinking, ‘I’m a champion, everything is going to be great.’ She had a way of putting things in perspective.”

When I heard about Frink’s death, Jesse was the first person I called. Over the next couple of days, gathering information for an obituary, I spoke with a handful of others, including Lois Martin, the classical violist who had been Frink’s partner for 25 years. And what I heard over and over again, from Martin and everyone, was a testament to her selfless dedication: to her students, to the craft of trumpet playing, to the music. Last year, when Douglas planned a tribute to Frink as part of the Festival of New Trumpet Music, she balked at the idea but grudgingly gave in. “She called me the day after and said, ‘I was afraid I wasn’t going to receive these honors,'” Douglas recalled.

“People like Laurie don’t get written about enough” was how Maria Schneider put it when we spoke. “They’re the kind of people that don’t jump for the limelight. But all those people who are in the limelight are being held up by the Laurie Frinks of the world.”

Organ trios and quartets were ubiquitous by the mid-1960s. In African American neighborhood bars and clubs up and down the East Coast, throughout the Rust … END_OF_DOCUMENT_TOKEN_TO_BE_REPLACED

Terence Blanchard looked around the restaurant table and launched into a gentle sermon about jazz education in Detroit that was part homily, part pep talk, … END_OF_DOCUMENT_TOKEN_TO_BE_REPLACED

Creating a program of solo piano music is the ultimate challenge for any improvising pianist. The music on my latest album, Ways of Disappearing (Sunnyside), … END_OF_DOCUMENT_TOKEN_TO_BE_REPLACED

First the good news: As you can see in our annual Festival Guide, there are plenty of jazz festivals scheduled to happen around the world … END_OF_DOCUMENT_TOKEN_TO_BE_REPLACED