Skip to content
Become a member and get exclusive access to articles, live sessions and more!
Start Your Free Trial
Home > Features > The Gig: John Scofield and Joe Lovano 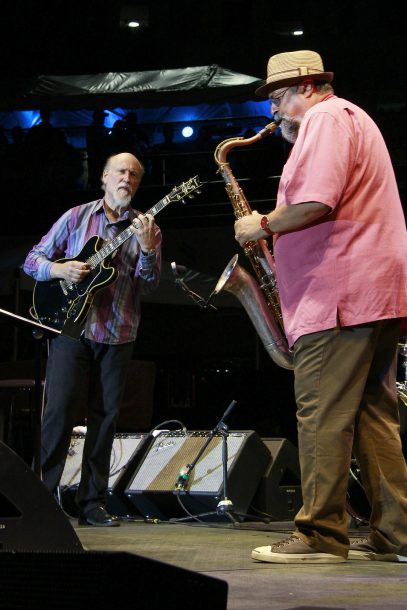 Every jazz fan has a personal catalog of Near-Miss bands-working units that you should have seen in action but, for one reason or another, you didn’t. I’m not talking about Duke Ellington’s Blanton-Webster band, or the Quintette du Hot Club de France; this isn’t a what-if with a time machine, though I can happily play that game all day. What I mean is the act of whiffing on a group that made its impact in your time, before fading into recent history. You had your chance, pal. You blew it.

Maybe I’m more susceptible to this feeling than most, due to my upbringing in Hawaii, well off the beaten path for even the most prominent touring acts. I was fortunate enough to catch a few, like the McCoy Tyner Trio, the Chick Corea Akoustic Band and the Branford Marsalis Quartet. But those were the exceptions, by far.

And to my great frustration, I never got to witness the John Scofield Quartet, which became a small obsession of mine at the time. That’s right, the band led in the early ’90s by the astute guitarist-with Joe Lovano on tenor saxophone, Bill Stewart on drums and either Dennis Irwin or Marc Johnson on bass-sits high on my Near-Miss list, owing to a combination of factors. Among them, surely, is the intensity of teenage enthusiasms: I still have my CD copy of the quartet’s first album, Meant to Be. Released on Blue Note in 1991, it established a pliable but unmistakable group sound, rooted as much in loping funk and rhythm-and-blues as it was in aerodynamic postbop. I practically wore that album out, and heartily embraced its follow-up, What We Do, in ’92. A couple of years later I lucked into a copy of The John Scofield Quartet Plays Live, a blistering 40-minute bootleg of the band in full cry. I had landed on the East Coast for college by then. Notwithstanding the odd nostalgic tour date, the quartet was done.

It’s back now, as you may have heard. Scofield’s new album, Past Present (Impulse!/Universal Music Classics), reconvenes Lovano and Stewart, alongside a worthy bass sub, Larry Grenadier. (Irwin, who replaced Johnson in the original quartet, died of complications from spinal cancer in 2008.) Perhaps I’ve invalidated my claim to critical objectivity, but I think the album is a winner, for more than nostalgic reasons. Its balance of compositions, all Scofield originals, captures the specific breadth of this band, hitting every important mark. Here’s your springy, two-step swinger (“Museum”), your slouch-in-the-saddle boogaloo (“Get Proud”), your wistful, smudged-pastel waltz (“Hangover”). The album opens with “Slinky,” which has a bleary yet seductive melody for guitar and tenor, a heavyset bass ostinato and a floating second-line groove in unhurried 5/4 time. I’d say it was the album’s most emblematic tune, but that overlooks the title track, a dark-hued blues with a slyly trudging bassline and a boppish head that Scofield and Lovano play in a unison that often splinters into chordal frizz.

The central feature of the original quartet was always the hookup between Scofield and Lovano, whose birthdays fall a year apart almost to the day. Members of a jazz generation that came of age in the woolly ’70s, they share a code of articulate gruffness, along with a startling capacity for translucent lyricism. And unlike some other magical frontline partnerships in jazz-Bird and Diz, or Miles and Trane, or even Gerry and Chet-they seem to converge on a nearly egoless plane, making constant micro-adjustments to each other’s moves. Their jostling bonhomie rarely feels like combat; it usually reminds me of a couple of regulars perched elbow-to-elbow at the end of a bar.

Of course there’s ample context for Scofield and Lovano collaborating outside this quartet. Scofield’s irreproachable 1990 album Time on My Hands matches them with bassist Charlie Haden and drummer Jack DeJohnette. In 2002 there was ScoLoHoFo, named for a supergroup with Dave Holland on bass and Al Foster on drums. Five years ago I saw a special confab of Scofield, Lovano, DeJohnette and Grenadier. (They played an unbroken two-hour set that included “Since You Asked,” from Time on My Hands, and “Keep Me in Mind,” from Meant to Be.)

So the bigger reason to celebrate the quartet reunion is its new book of music, expressly conceived for a Scofield-Lovano band featuring Stewart on drums. A fresh arrival when he appeared on those initial albums, Stewart has since flourished as a leading drummer in the modern mainstream-and I’d argue that even with his heavy track record, he still does some of his finest work in this setting. So here’s where Past Present gets a little confusing: Stewart is a more seasoned and assertive presence now than he was 25 years ago, and his artistry lifts the music. I’m having a hard time hearing through my fog of sentimental attachment, but the new album feels like a deeper statement than the quartet was capable of making the first go-round.

There’s certainly deep subtext: Scofield composed this music while his son, Evan, was struggling with cancer. (He died in 2013, at 26.) Several song titles, like “Get Proud,” are old catch phrases of his; a lilting tune called “Mr. Puffy” alludes to the teasing sobriquet that Scofield devised to cheer Evan up during chemotherapy. Remarkably, none of this plays as tragedy: Past Present is an affirming album even in its darker moments, which brush against the insoluble truth of time, and what it leaves behind.

I can’t speak directly to that point, despite having lost two close family members to cancer within the last year. What I can say is that Scofield’s gesture toward reunion, at a moment of loss, feels honest and true. I’ll merely add that I’m looking forward to catching the quartet when it plays the Blue Note in mid-October. Finally.

Terence Blanchard looked around the restaurant table and launched into a gentle sermon about jazz education in Detroit that was part homily, part pep talk, … END_OF_DOCUMENT_TOKEN_TO_BE_REPLACED

Creating a program of solo piano music is the ultimate challenge for any improvising pianist. The music on my latest album, Ways of Disappearing (Sunnyside), … END_OF_DOCUMENT_TOKEN_TO_BE_REPLACED

First the good news: As you can see in our annual Festival Guide, there are plenty of jazz festivals scheduled to happen around the world … END_OF_DOCUMENT_TOKEN_TO_BE_REPLACED

Steve Lacy was once a brilliant bebop player. Yet conventional wisdom says the opposite. Many have long argued that a key to the innovative soprano … END_OF_DOCUMENT_TOKEN_TO_BE_REPLACED