Skip to content
Become a member and get exclusive access to articles, live sessions and more!
Start Your Free Trial
Home > Features > The Gig: Intuitive Coordination 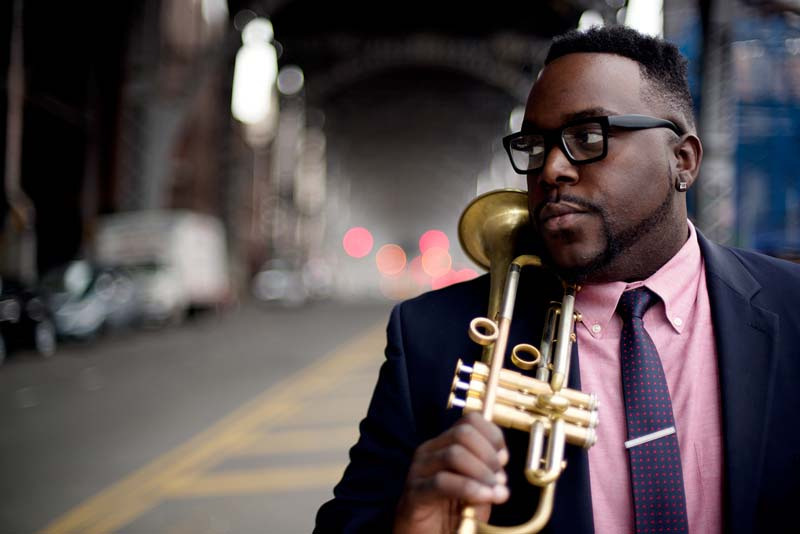 Marquis Hill has a brawny but mellow sound on the trumpet, and an evenness of attack across the breadth of his range. His articulation, precise but unlabored, calls to mind the precedent of Clifford Brown, while his bravura phrasing suggests an equal immersion in Freddie Hubbard and Woody Shaw. All of which surely helped his cause at last year’s Thelonious Monk International Jazz Competition, where he won first prize, and with it the promise of a recording contract with the Concord Music Group.

Hill’s performance at the competition semifinals, which lives on as a 15-minute clip on YouTube, would seem to mark him as the latest in a succession of astute young postbop swashbucklers on the horn, like Jeremy Pelt or Sean Jones before him. Backed by a swinging house rhythm section-Reggie Thomas on piano, Rodney Whitaker on bass and Carl Allen on drums-he breezes through an uptempo “Straight, No Chaser” (the requisite Monk tune) and then finesses a standard, “When Sunny Gets Blue” (the requisite ballad). His closer is an original, “The Wrath of Lark,” a flight of modal gymnastics bracketed by a hard-churning vamp; it would have sounded right at home on one of the Young Lion albums that kept Whitaker and Allen busy in the ’90s.

But of course the Monk Competition is a fishbowl, and this pressurized sample of Hill’s talent, while impressive, hardly captures his scope as an artist. A homegrown product of Chicago, he was mentored by the likes of pianist Willie Pickens and saxophonist Ernest Dawkins, and had early exposure to the intrepid ethos of the Association for the Advancement of Creative Musicians. He appears in muted, brooding glory on the new album by smooth-jazz sax man Boney James.

Hill’s own recorded output in recent years has engaged with hip-hop and spoken word, with contributions by Keith Winford of the Chicago rap crew Legend Haz It. Modern Flows EP, Vol. 1, released on Skiptone Music last year, makes the organic synthesis between jazz and hip-hop feel almost like a raison d’être.

That EP-like Hill’s 2013 album The Poet, also on Skiptone-finds him leading an agile young band he calls the Blacktet. With Christopher McBride on alto saxophone, Justin Thomas on vibraphone, Joshua Ramos on bass and Makaya McCraven on drums, it’s an appealingly shadowy ensemble, capable of full-tilt aggression but just as likely to make its point with chamber-esque cool. Early this year I saw the band perform in the Monk-in-Motion concert series at the TriBeCa Performing Arts Center, and came away marveling at the intuitive coordination between the players, the rare level of on-the-spot composure that only a serious working band can attempt. Hill was clearly the man at the controls, even in those moments when Thomas and McCraven locked into a slanted groove, communicating on their own transmission frequencies.

Hill adheres to a pattern of stealth logic as a composer, apparently working under the premise that a tune works best when it has several gears whirring at once. “White Shadows,” a highlight of the set, featured a fluttery agitation among the bass and drums, over which Hill and McBride wafted a serenely blended melody, with Thomas filling the interstitial spaces with his chiming harmonies.

On Modern Flows EP, Vol. 1, a tag near the end of “White Shadows” becomes the instrumental backdrop for Winford’s rapping. This is deftly done, but the more striking integration comes elsewhere-when, for instance, the harmonized head of a floating tune called “The Essence” becomes the loop behind Winford’s verses on the following track, “Love My Life.” The same happens with a stutter-syncopated line on “When We Were Kings,” which resurfaces, slowed and slightly muffled, on “King Legend.” It’s as if Hill is mirroring the creative exchange between a jazz record and a crate-digging hip-hop producer, effectively sampling his own supply. (A similar process reigns on In the Moment, an excellent new album by McCraven on International Anthem, stitched together from months of live recordings, with Hill and Thomas among its personnel.)

This has been a year in which the stark old divisions between “straight-ahead jazz” and “jazz meets hip-hop,” as genre constructs, began to seem downright quaint. Pianist Robert Glasper deepened his hybridizing agenda with an acoustic trio album, Covered (Blue Note), while saxophonist Kamasi Washington shook the ground with The Epic (Brainfeeder), which occasionally suggests Young Lion protocols retooled for a modern ear. Kendrick Lamar, the brilliant Los Angeles rapper, stocked his monumentally ambitious album To Pimp a Butterfly with a musical corps that included both Washington and Glasper, exhorting them at times to swing like mad.

Hill, who now splits his time between New York and Chicago, should fit into such a matrix. When I asked him about it recently, he said he hoped that he does. His modern trumpet pantheon includes Roy Hargrove and Nicholas Payton, who started out on the straight and narrow and eventually flew their freak flags high, and it’s fascinating that Hill and his generation have felt so little pressure to conform right out of the gate. So I was a little surprised when Hill told me that his Concord Jazz debut, due out next year, will be a standards album-as if he were taking the typical trajectory in reverse.

It’s not that simple, though. When I asked him for examples of the album’s repertoire, Hill mentioned a couple of tunes well off the beaten path: Horace Silver’s “Moon Rays” and a bop-calypso workout called “Beepdurple,” by the Kansas City trumpeter Carmel Jones. He also stressed that the album would have a recognizable Blacktet slant. As for Modern Flows, Vol. 2, presumably a good fit for Concord, whose roster includes pianist Kris Bowers and trumpeter Christian Scott, he said it was just a matter of time. “I want to keep playing with that idea,” he said, with a laugh that did little to disarm his sincerity.

Organ trios and quartets were ubiquitous by the mid-1960s. In African American neighborhood bars and clubs up and down the East Coast, throughout the Rust … END_OF_DOCUMENT_TOKEN_TO_BE_REPLACED

Terence Blanchard looked around the restaurant table and launched into a gentle sermon about jazz education in Detroit that was part homily, part pep talk, … END_OF_DOCUMENT_TOKEN_TO_BE_REPLACED

Creating a program of solo piano music is the ultimate challenge for any improvising pianist. The music on my latest album, Ways of Disappearing (Sunnyside), … END_OF_DOCUMENT_TOKEN_TO_BE_REPLACED

First the good news: As you can see in our annual Festival Guide, there are plenty of jazz festivals scheduled to happen around the world … END_OF_DOCUMENT_TOKEN_TO_BE_REPLACED