Skip to content
Become a member and get exclusive access to articles, live sessions and more!
Start Your Free Trial
Home > Features > The Gig: In the Tradition(s) 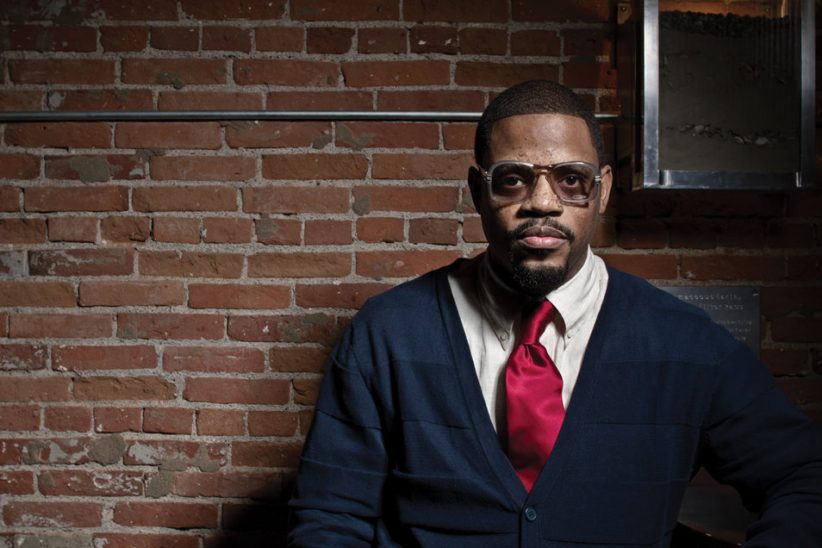 Karriem Riggins first caught my ear in the late ’90s, and for a minute I thought I had him pegged. An instinctive young drummer with a firm grasp of jazz conventions, he was then apprenticed to Ray Brown, the giant redwood of jazz bassists, and otherwise affiliated with a clutch of soulful postbop pianists: Mulgrew Miller, Stephen Scott and Eric Reed. I knew that Riggins hailed from Detroit, and that he could deliver a mean pocket while swinging hard and fast. I figured him for an uncommonly sharp custodian of the tradition, and figured that distinction was enough. Of course I was only half right.

The earliest sign of my misapprehension came in 2000, around the same time that Riggins appeared on Live at Starbucks by the Ray Brown Trio. I can recall admiring Riggins’ impeccable swing on that outing, and his collegial bond with pianist Geoffrey Keezer. I remember the boppish clarity of his solo on one Duke Ellington staple (“Mainstem”), and the sleek authority of his ride-cymbal pattern on another (“Caravan”). It all fit squarely into my young-lion framework for Riggins-which is why I was startled, a few weeks later, to spot his name in the credits of Like Water for Chocolate, by the rapper Common. More to the point, Riggins was listed not as a drummer but as the producer of that album’s closing track, a cooled-out jazz-funk groove.

There was a lot of hopeful crossover between jazz and hip-hop in the early 2000s, thanks to the neo-soul movement spearheaded by artists like the singer D’Angelo and the producer J Dilla. Anyone paying close attention knew that Riggins, a confrere of Dilla’s, was plugged into that matrix, too. I next noted his handiwork on Phrenology, a 2002 album by the Roots: His contribution was “Quills,” built around a slithery bass-and-piano vamp. In the same year came Common’s Electric Circus, for which Riggins produced “The Hustle,” a standout, somehow both woozy and rock solid in its approach to groove. The cover illustration of Electric Circus is a Sgt. Pepper-style collage featuring the album’s many contributors, along with a few of its patron saints; Riggins is in the lower-right corner, above the black-and-white Parental Advisory logo.

Riggins still broadcasts on multiple frequencies. His most recent sideman credit is for Kisses on the Bottom, the gold-plated standards album by Sir Paul McCartney. He’s the longtime drummer with Diana Krall, whom he originally met through Brown. When he spoke with me by phone recently, from his home in Bloomfield Hills, Mi., he was fresh off a three-month stretch on the road with her.

What we talked about was his impressive new solo debut, Alone Together, an instrumental hip-hop album that he produced entirely himself. The album is out on Stones Throw, an independent hip-hop label with a discriminate base. Not long ago the label dedicated an installment of its podcast to him: “Karriem Riggins Produced That.” At just under an hour, it suggests a full-length trailer for the new album, stocked with notable cameos. Another way to see it is as a selective survey of Riggins’ extensive non-jazz output, though that’s imposing a conceptual distinction that he himself is hesitant to make.

“I don’t pay attention to that,” he said, referring to the line that others draw between his musical hemispheres. “My dad’s a jazz musician”-the keyboardist Emmanuel Riggins-“and I heard a lot of records, grew up listening to Trane and Miles and Monk. And also, all my friends were listening to UTFO and the Fat Boys. I had that balance growing up, where I felt like part of the hip-hop generation but still connected to the jazz tradition. I had a rap group in elementary school, and also played in workshops with [trumpeter] Marcus Belgrave and cats around town. I always worked on my craft from both sides.”

Riggins created many of the tracks for Alone Together on the Diana Krall tour bus, using portable sampling and sequencing workstations like Akai’s MPC 5000 and Native Instruments’ Maschine, which he said he favored. When I asked, half-jokingly, whether the music on the tour had exerted much direct influence on the album, he was quick with an earnest reply: “Most definitely.” Many of the ideas on the album, he said, had originated onstage with Krall and her band. One track, “Alto Flute,” includes a sample of a wicked bass ostinato by Robert Hurst, tossed off during a sound check and recorded with Riggins’ iPhone.

You’ll find no overt trace of swing on the album, but that’s not to say it isn’t swinging, in its own way. The tracks, which average around two minutes but flow seamlessly one into the next, represent a series of meditations on groove. “Esperanza” features an array of twinkling timbres-pizzicato strings, tongue-slurred flute, what sounds like sitar-that come together like delicate clockwork. “A7 Mix” has the annunciatory energy of an early fusion overture. “Double Trouble” layers vibraphone, bass, flutes and percussion in an ascending array that suggests Tortoise, the Chicago post-rock band.

What’s striking throughout is the human feel behind the mechanized detail, and the surprising amount of melody that slips into the picture. This may be an album centered around beats, but it’s not a drummer’s extravaganza. The only moment when Riggins really lets loose is the closer, “J Dilla the Greatest,” with polyrhythmic snare and cymbal work that strongly evokes his Detroit drumming lodestar, Elvin Jones. There’s a jazz constituency that regards hip-hop at large with rigid skepticism, and Alone Together is not for them. But is Riggins being any more radical than his jazz forebears? His own father appeared on several early 1970s Blue Note albums by guitarist Grant Green, including the one that yielded “Ain’t It Funky Now,” a jazz-funk classic. At any rate, Riggins is having it his way, both ways. “As a whole I wanted the record to basically project love,” he said. “As well as the hump. I want it to be so funky that it’s undeniable.”

First the good news: As you can see in our annual Festival Guide, there are plenty of jazz festivals scheduled to happen around the world … END_OF_DOCUMENT_TOKEN_TO_BE_REPLACED

Steve Lacy was once a brilliant bebop player. Yet conventional wisdom says the opposite. Many have long argued that a key to the innovative soprano … END_OF_DOCUMENT_TOKEN_TO_BE_REPLACED

What is a jazz film? Does it have to be a film about jazz and the people who play it? Or can it also be … END_OF_DOCUMENT_TOKEN_TO_BE_REPLACED

Films that tell stories about jazz open a revealing window on the place and perception of the music within popular culture. See Kevin Whitehead’s compelling … END_OF_DOCUMENT_TOKEN_TO_BE_REPLACED